For those of you who are not familiar with the game of Werewolves (also sometimes referred to as ‘Mafia’), it is a game meant to be played with 6 or more players and a moderator. The moderator deals out role cards face down to the players. One of these cards is the Werewolf. The rest are either villagers who have no special abilities, or a specialized role that allows players to anonymously influence the game. Each player secretly looks at their card to learn their role.

What is Werewolves Mobile and how is it different from regular Werewolves?

It’s a mobile game that streamlines the standard game of Werewolves while also adding a unique twist to the game. It’s not a companion app or meant to be played with a single person on a single smartphone. There is no moderator required and the roles the game is traditionally played with can be expanded upon. 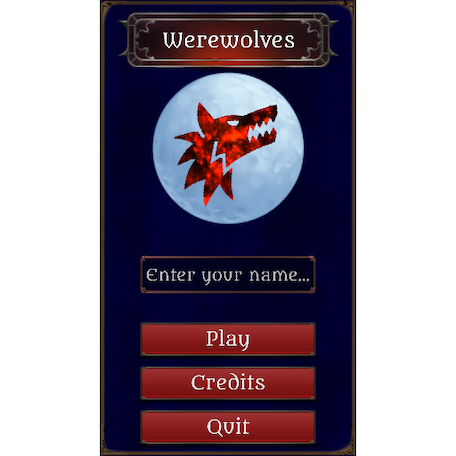 It's a free app, with a full version available as an in-app purchase.

Everyone who wants to play downloads the free Android or iOS app to their smartphones and connects to the same Wi-Fi network. When the game is launched, enter your name and press play. You will automatically be connected to everyone else on the Wi-Fi network. When everyone is ready, press the ready button and the game begins.

The game starts with each player being assigned a role. Once everyone confirms that they know and understand their role, the first night of the game will begin.

When the night phase begins, each player will be presented with a list of players that they can select for that night. This list will vary depending on each player’s role. For example, the werewolf will be allowed to select any player but themselves. The Defender will be allowed to select any player that he wants. All players regardless of their role make a selection in the night phase. This prevents players from trying to observe who is making selections in the night to determine who has a role. When all players make a selection, the sun rises and it is revealed who was eaten that night.

After it is revealed who was eaten, every player is given a list of players that are still alive. Each player gets one vote for who they think the Werewolf is. Players cast their vote by selecting the player. When all players cast their vote, it is revealed who will be executed by the villagers under suspicion of being a Werewolf. In the event of a tie, no one is executed. (This can be changed in the full version.) After revealing who is executed, night falls and the cycle repeats.

As players die throughout the course of the game, a code of honor is necessary to prevent dead players from revealing their insights before their passing. As such, to preserve the integrity of the game, it is recommended that all dead players refrain from talking about the game or influencing it in anyway. Players should also refrain from showing their screen to other players and talking during the night phase.

What are the roles?

Full credit to game-icons.net for all of the icons used in this project.

To promote Werewolves Mobile and grow its popularity (top games), use the embed code provided on your homepage, blog, forums and elsewhere you desire. Or try our widget.

Ever wanted to make your own miniature game like League of Legends or Heroes of the Storm and fight with your friends as admin? Or just play with thousands...

GLC is an MMO action adventure game which focuses on exploring the high seas and PVP action versus other players and enemies as you fight to become one...

Every world has conflict. Good and evil. Friend and foe. Safety and danger. In Baldur's Gate II: Shadows of Amn™, you'll find yourself between these...

Play with 4-10 player online or via local WiFi as you attempt to prepare your spaceship for departure, but beware as one or more random players among...

The main game plot takes place in Icewind Dale, a sub-arctic region being the northernmost explored area of Faerûn. Its only permanent settlements are...