The game itself has no fixed storyline, only that it is supposed to become a free open source replacement for common multiplayer shooters, from basic deathmatch like quake over to team based games like counter-strike. It will be more like a sandbox that tries to combine a bunch of similar genres.
Sure commercial games can also be modded, I did so also in the past, but it was very frustrating, since it was always a dead-end. You did not own the engine or the content you modded and so you never had the rights on your creation and when the next version of the engine or game came out, you would lose all your playerbase, since they will move on to the new game, so if you would want to keep up you would have to buy the new game and start from scratch modding it again. So modding always turned out to be a waste of time, but I want to change that, by keeping everything on the same platform, to keep it compatible and free.

If you are interested in playtesting the latest development-build, you can go to Duion.com , there will be some description on how to do it.

You can get in contact with us on our IRC-channel or on our Mumble-voice-server, so if you are searching for other people to play with, go there.

If you want to support this Project check out this link: Support Uebergame

The backstory is that, since almost every multiplayer game has Battle Royale style game modes now, I thought I need that as well, or better said, people suggested that to me. I even met people who wanted to team up with me creating such game modes, two of those seemed serious with it, so we set up tasks to do and a schedule, where I would be designing the levels and the other person would do the coding.

To make the long story short, the other people all ran away, without having done anything and I of course did my part and finished the levels. Since the creation of those large scale maps took so long I wanted to release it anyway so they can at least be played without having to wait even longer for the game mode to finish, that is why the game mode is mostly nonexistent so far, except a few improvised features I quickly made to make it all work.

Other changes in this version are of course some new art assets mostly for the new levels, some fixes for the art assets, some gameplay balancing changes and a single player game mode template, for developers. The story behind the singleplayer game mode is, that before I planend to do the Battle Royale game mode we planned to create a single player game mode, which meant someone was helping me with it and he actually did some coding, but then also ran away and was not seen again, that is why that gamemode is not in use yet and only a template as inspiration for developers.

And finally a short description of the new levels: 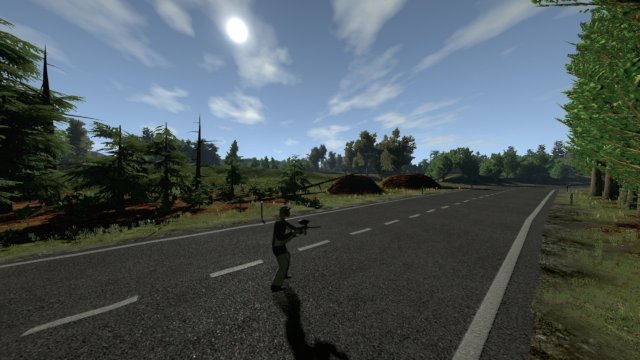 A medicore sized park area, roughly 0.5 x 0.5 km in size. In the middle it is crossed by a big alley road next to a river and on the sides you can follow several footpaths through the park area. It also includes some lakes and little forests. 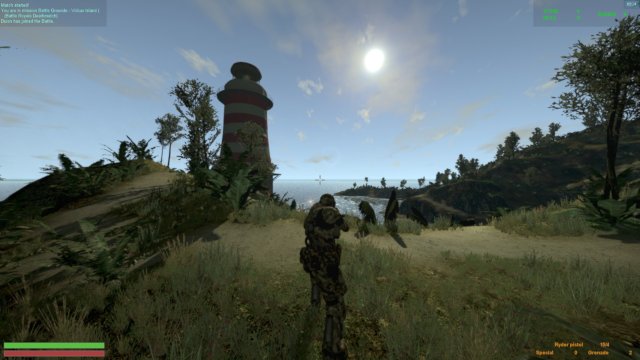 Also 0.5 x 0.5 km in size, but this time it is an island with a volcano like mountain in the middle you can climb and below there is a rather large cave system you can use to walk underground from one side of the island to the next. It features dense, but small vegetation without big trees, so it only offers decent cover, if you duck behind it. It also features the recycled lighthouse from the watertown level adding a little more playable area to the rather small 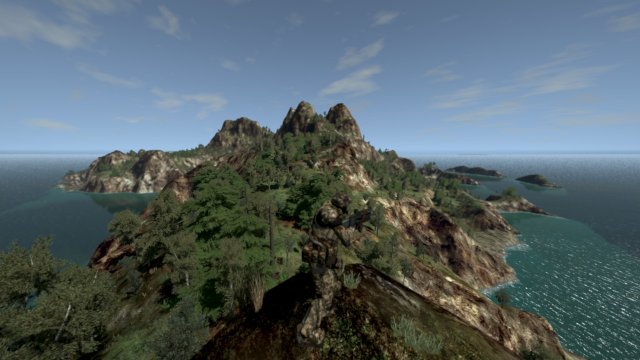 This is a big island 1x1km in size. It is very high with very steep walkways, but in between there are occasional flat areas with pretty dense forests. You can climb most of the mountain peaks, which gives you a great overview and great possibilities to snipe, but you are also pretty visible and it often takes some time to climb onto there. 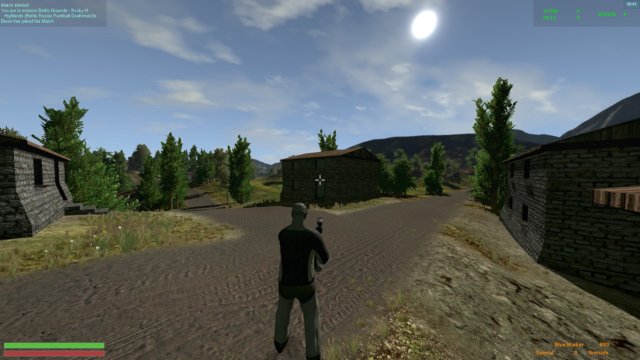 This is probably the biggest map this update, though also 1x1 km in size, but since it is not an island, but a square area, it features a more playable terrain. The level is set in the mountains, but also feels mediterranean from the looks. In the middle there are a few little mountains and inbetween in the valleys there is a road network with little villages of up to a few buildings each, which are fully accessible.

This version adds 3 complete new levels in the tropical pacific style, with 4 variations each as known from the other levels, like at dawn, by day, by...

Uebergame goes on with a new fancy version and several new features...

This version adds 3 complete new levels in the tropical pacific style, with 4 variations each as known from the other levels, like at dawn, by day, by...

Uebergame goes on with a new fancy version and new features...

SOOOOOOO common, people say they help and then run away.
Know exactly what you mean, i make mods and had the same experience so many times. People want to make mods and or games but as soon as they really start to realize that it takes insanely amount of time and effort they run for the hills. Applaud for you to keep going!

hi bud i love your work

Anyone out there want to develop my book into a game? I am the Author of Elimination Theory and will sign away majority rights for whoever wants to develop it???
Contact: TJ Byron

Whenever I launch the game, it freezes. The console log didn't give much insight on the issue except that Uebergame may not be compatible with x86. The game also gave an error regarding some x32 file not working, or missing. If you know why this is happening, I would like to know, I really like this game. Thanks!

Oh, I figured out the issue. Steam was trying to launch the x32 version for whatever reason? I just used the normal version and it works fine.

tbh, I would even go as far as throwing money at the dev for this. you've basically built an off brand Arma, and hey, It works. My only problem is that there is literally no playerbase. I'll keep my eye on this however until I see more people, I'm not downloading.

Player base is currently 10-20 player continuously playing.
Currently I'm trying to get the servers working, but it is a complicated task.
For all who want to throw money at it, I have already started Patreon campaigns, look for more information here: Duion.com

Hi, when i open Uebergame after downloading it from steam it shows "Uebergame has stopped working". i tried to reopen it and restart my laptop but it's still the same. I hope someone can help me out as I'm looking foward to try this game out. Thanks!

Look in the console.log in the game folder, maybe there is an error in there. Also if your laptop has an old graphics card it may not be able to run the game.
You can also try to download the zip version from here or from my site and try with that and see if the issue is still there.