The Mothernode is a new game where up to four players compete against each other, racing through a maze of random storage boxes to reach the safety node in the center of the room. As they make their way towards the center the players receive bonuses that they can use to help themselves and to hinder the progress of others.

The game is designed to be used on the Levono Horizon All-In-One PC and is a Round 2 Finalist within the "Games" category for the Intel® App Innovation Contest 2013.
demo available to download and test.

DOWNLOAD CURRENT DEMO [r02]
[This download will also work on a non-touch-screen PC, but only in single player mode]

The Mothenode gameplay consists of a number of simple tasks, the basics of which are explained below.

The Objective/Goal
Each round starts with your raider in one of the four corners of the screen and your aim is to guide your raider to the safety zone in the center of the screen before any of the other raiders get there. Blocking your way is a large grid of storage boxes. The only boxes you can see at the start are the red invincible boxes and the two boxes adjacent to your raider. 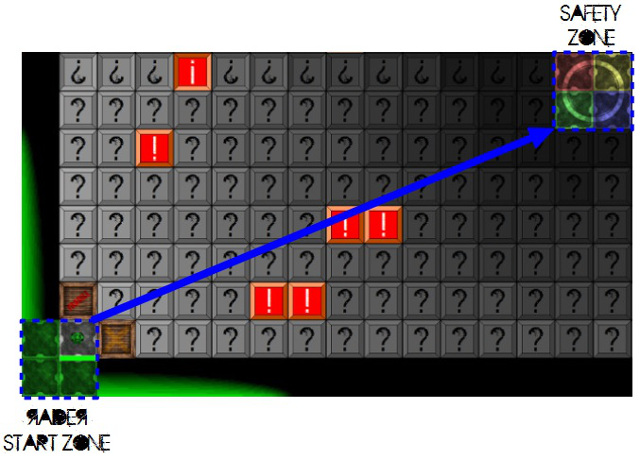 Movement The game is played in real-time so you will need to guide your raider immediately. To move your raider towards the safety zone your raider needs to break open the boxes in their path. Boxes are targeted to be broken by touching them on the screen. 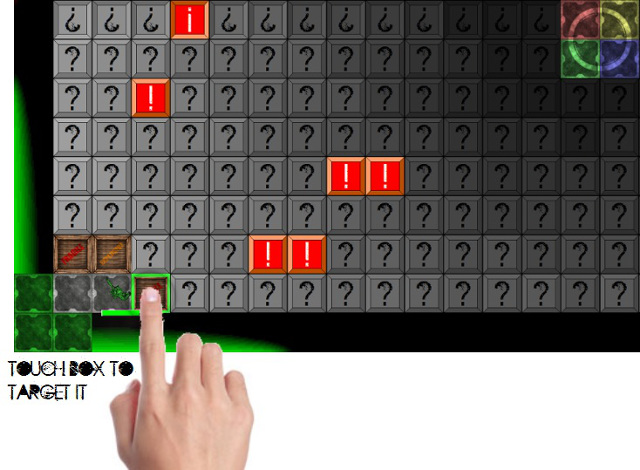 As boxes are broken open, some of them grant the player a bonus. All the bonuses collected by the player sit along side the raider's start zone. 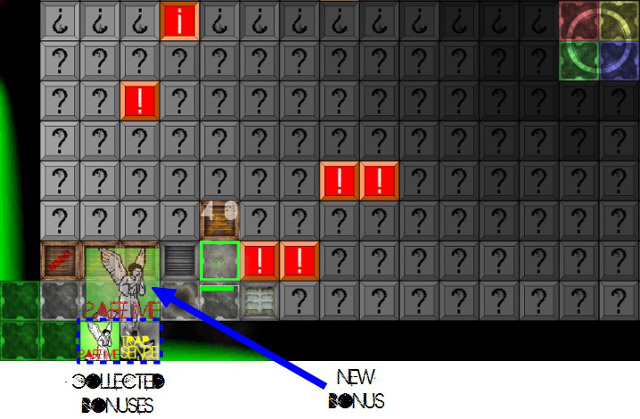 Bonuses
There are two types of bonuses the raider can collect and use: One-Shots and Decayers.One-Shot bonuses are simply that, bonuses you can use once such as: 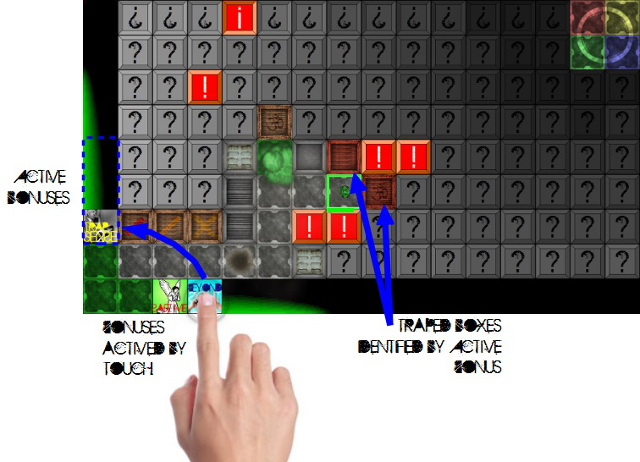 One-Shot bonuses are used by dragging them to specific boxes in the grid. The image below shows the "3 in-a-row Destroy" bonus being dragged from the collected bonus area to the target box. 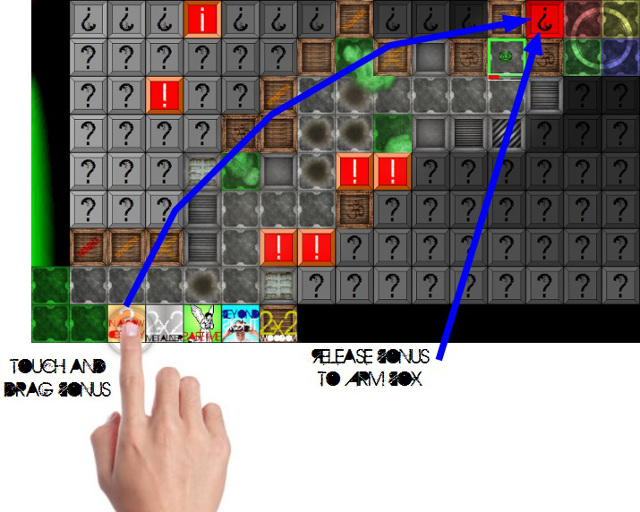 Once armed, the 3 in-a-row bonus is dragged to a second target and released to activate. 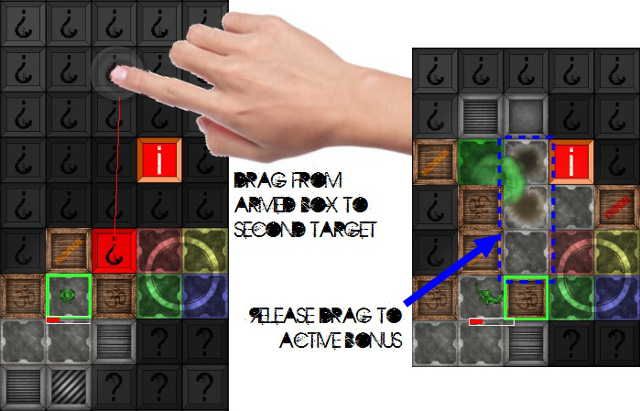 Boobytraps As well as bonuses, some boxes also contain traps. Explosion traps cause immediate injury to the raider and can also destroy adjacent boxes. Poison gas traps are permanent traps that slowly poison the rider if they stand in the poisoned zone. 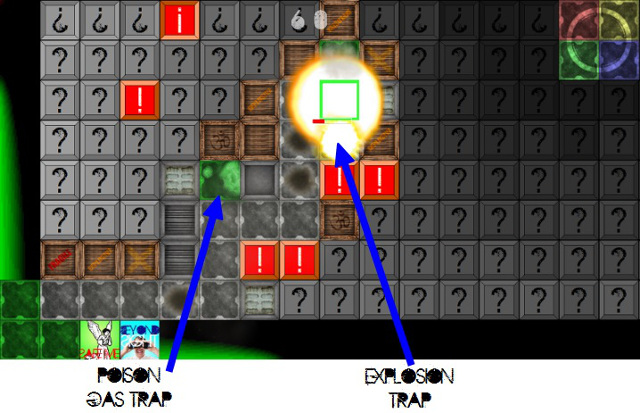 End of Round Feedback Eventually a raider will reach the safety zone and trigger the end of the round. When this happens, play stops and the players are given some feedback on their performance. 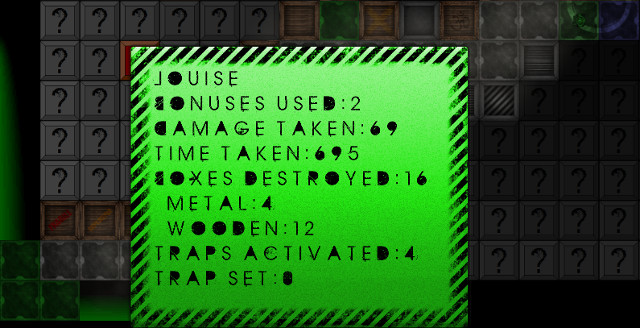 The game types are briefly described below, but they all consist of 2 phases:
Phase 1: Get to the Safety Node
As explained above, players direct their raider by breaking boxes in their raider's path to the Safety none. Raiders can use their bonuses during the level by tapping and/or dragging them from the collected bonuses area to their target. Multi-touch is essential for this game as there will be many players taping and dragging from all four corners of the screen simultaneously. This phase ends when a raider reaches the Safety node.
Phase 2: Trade your bonuses for a head-start
After the room is cleared, the players get 10 seconds in which to trade any unused bonuses for a 5.0 second head-start over the other players, trade 2 bonuses and get a 10.0 second head-start and so forth. The unwanted bonuses are flicked into the center of the screen. This phase ends when the timer runs out. and the game restarts at phase 1.

There are also five variations of the game planned for the final version, although only "Last Man Standing" will be available in the demo: 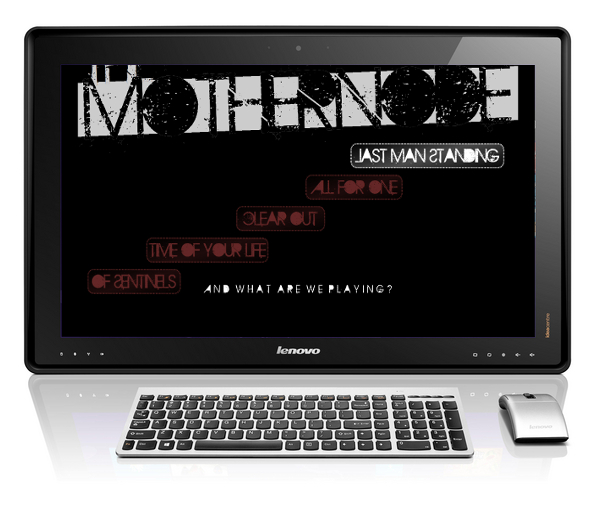 Legend has it that the Champanova, the flagship of the once mighty Galactic Trading Corp (GTC), was filled with half the world’s wealth when it vanished from known space 50 years ago. So when the ship mysteriously drifted back into the Solar System, apparently abandoned, there was a mass panic by the Earth's population to capture the craft and claim the treasure as their own.You play as one of the many raiding individuals trying to reach the Mothernode – the control centre of theChampanova that will grant to access to the unimagineable wealth the ship contains. The location of the Mothernode is not known, lost in history as the databanks of the GTC were wiped as it went into financial meltdown and the few that knew the details were tortured to death . Raiders start at the docking bay of the Champanova and have to navigate their way through a series of connected warehouses. Access to the adjoining warehouses is controlled by a safety node in the middle of the storage area and has completely surrounded by storage containers. The safety node grants the user access to one of the connecting storage areas, but also activates the internal security systems which destroys all the remaining storage containers. To get to the safety node, raiders break open the storage containers in their path. Some containers are harder to break than others (wooden crates are easier than metal cases) and some are impossible to break. Containers can contain good and bad surprises. Some containers grant the raider bonuses (extra speed, extra health, cash, etc.) some causes problems (explosions, release toxic gas, etc.) which the raider either needs to flee from, or use protection against. The game is aimed at young adults and teenagers. Although there is no gore and there are no offensive weaponry, the tone of the game and its style is aimed at a more mature audience.

To promote The Mothernode and grow its popularity (top games), use the embed code provided on your homepage, blog, forums and elsewhere you desire. Or try our widget.

Race, Collect , Destroy and Tag your way through over ten fast paced multiplayer minigames! Play with up to four other players or against AI bots across...

Robotop is a hyper casual game based on a robot trying to catch the maximum of coins and diamonds so he can get back his superpowers! Mini robot trying...

A simple game to pass the time. Nothing exceptional or extraordinary. A shoot'em up from the past with updated graphics.

3D adventure quest. Solve the mystery of war survivors, that are forced to live under protective dome KAPIA. Dive into unique universe of KAPIA to help...

Compete to see who is the greatest Jump Champion by landing on as many heads as possible, each one earning you points.

Dive into the bizarre world of Epic Loon, a quirky physics platformer for up to 4 players playable in couch co-op or battle mode.