As the game is still pretty early in development, significant changes in features and the order in which they will be implemented will vary. However, certain things can be considered as definite to happen such as the following:

-First release will be on PC (Windows and Linux) with Android and WinRT support shortly following (I might do an OSX/IOS port, however at the moment I lack the necessary hardware)

-The feature set will be expanded via incremental updates, which means that the first release might feel a bit light on the strategy for some. On the plus side, you'll get to oversee the shaping up of all the game's systems (Diplomacy, Production, Research) and offer your input in great detail. So, instead of throwing rotten tomatoes at me in one go, now you can do it throughout development!

-Modding support will be implemented for all platforms! The degree of modability will depend however on how cooperative the Unity engine turns out to be (and more than likely if you're able and willing to get filesystem access on your tablet - I'M NOT RESPONSIBLE IF YOU MESS SOMETHING UP). At the very least, you should be able to mod various settings via .INI files.

Guess what cat's back in town? It's ME! And this old fleabag's got more than only a handful of fleas in its bag!
Well, technically speaking, I never left, just kept radio comms to a minimum, working in the shadows.
Now, about that old bag of goodies...

Through some devious scheming tactics (well, that might actually be a bit of an overstatement) I managed to use STRATCOM for a university project therefore securing a good couple of months of dev time solely on the game. Most of the work went however in the plumbing of the game as such, the gameplay itself is at a minimum as you will see in the video below.

Also, due to a last-minute bug in the pathfinding system, unit movement is pretty much broken... again.
You may disregard the turn-based mechanic as it was just for a temporary university assignment. It will not be featured in the final game.

And now for details on the less visible side of this Alpha...

What's all this talk about an "Engine within an engine" ? Big words indeed, if a bit of a questionable design decision I'd hear you say. Well, let me start by saying one word around which the entire technical design of STRATCOM revolves: flexibility.
One aspect this implies is code reusability. While a tighter integration with Unity might mean getting stuff done quicker it also means less control over the project and this could affect the game in time as it grows more and more complex and various aspects would have to be finely tuned to deliver the best player experience possible.
Another reason is the planned switch to a fully independent, custom-built engine. Right now, STRATCOM depends on Unity for graphics, physics and multimedia (sound, input). Its practically a game engine on top of a fully fledged engine.
Once the game engine is sufficiently developed and mature, a replacement for the Unity code will be developed as well, which should allow the game to be released on even more platforms and also lower hardware requirements.

Here's a quick glance on some of the game engine's components and how they work with eachother. All the Unity dependent code ties into MonoBehaviour. As you can see, MapInit, which is the heart of STRATCOM's game engine ties into it. There are others as well but the intention is to keep these ties to a minimum. 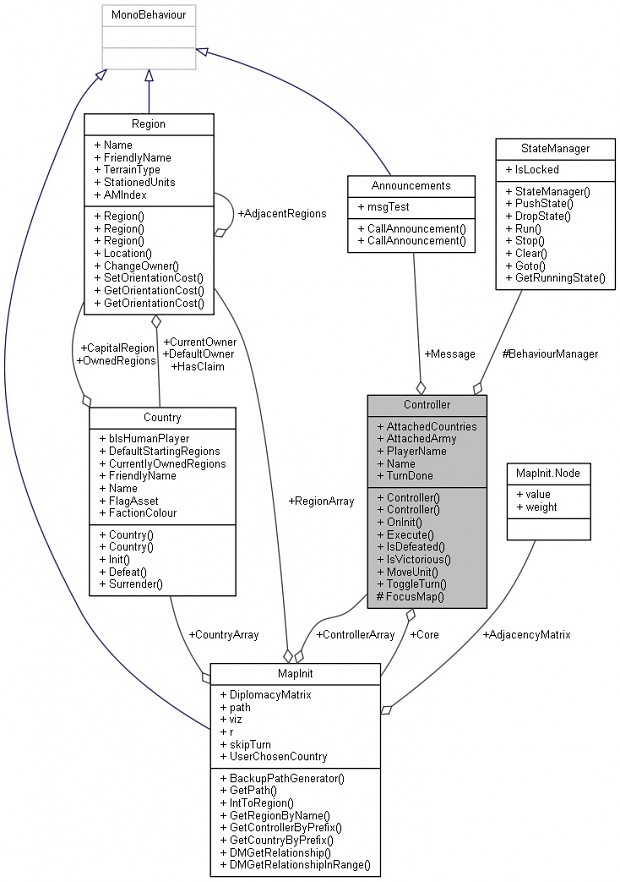 Finally, the other aspect behind Flexibility is Modabillity. Those of you familiar with modding C&C games should feel almost at home here as quite a lot of game settings can be changed via INI files.
Current available changes include unit names and stats, faction colours and flags, names of regions, countries, rulers and cabinet members and a whole bunch of other random stuff.

Modding will not be limited to just a bunch of cosmetic changes. My hope is that Total Conversion mods will be possible and easily loadable into the game, so, imagine Sci-Fi warfare on alien worlds or a recreation of Asgard, Midgard and all the other Norse worlds in one giant map!
Eventually, at least one modpack will be released with STRATCOM to test and illustrate the modding capabilites of the game.
Alas, here's a snip from one of the INI files you may change:

Countries.INI wrote: ;Default Settings for Game Start
;Used ONLY FOR MAP INIT
;We really need to implement a comment check for the INI parser

Other, minor stuff that happened: the project now has a Bugzilla page (local, no internet access, sorry) to better keep track of things like well... uh... bugs and features that need to be done.
A quick and dirty port to WinPhone 8.1 was also done.
And, may I say how happy I am that with the latest version of Unity we finally have access to decent and powerful new UI tools which should make STRATCOM look fantastic across all devices and screens?

Is This Really The End?

It may be for today, but don't worry kids, we'll be back right after the break!

What is STRATCOM, Metro support in Unity and how it all ties in to the game.