A life simulation with space and RPG elements? This is the proposal of the this project, made by a single passioned gamer and aiming to deliver an unique, cross-genre experience.

You were born in the capital of the strange nightkin country, called Lunaria; your parents once were adventurers and due to their stories you started to dream upon becoming one yourself, but you have not enough cash of your own to begin your glorious career, and not everyone on your family approves that; but of course you will not give up, and thus your lifetime tale begins, a tale which will make you wonder if that was a good idea in first place. 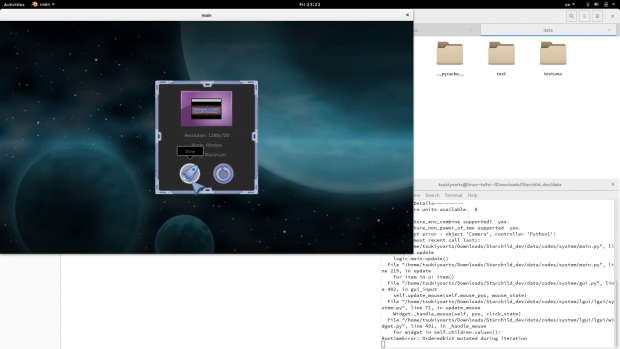 Game once more operational, but I was not able to solve the custom launcher issue, I am running the game directly from blenderplayer, that is why the icon and name is not that of the game. 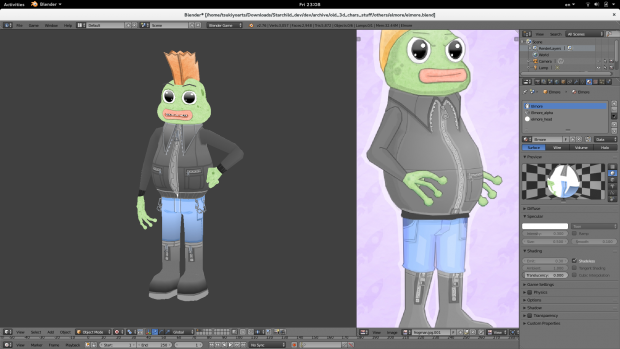 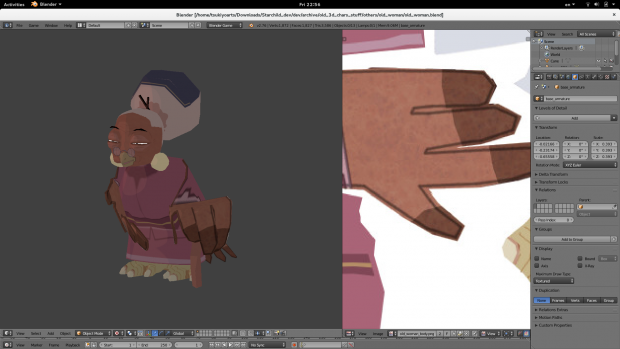 Old previously already finished model, before switching to 2.5D in the past.

Conversation model in 2.5D, will no longer be used. 3D once more possible. 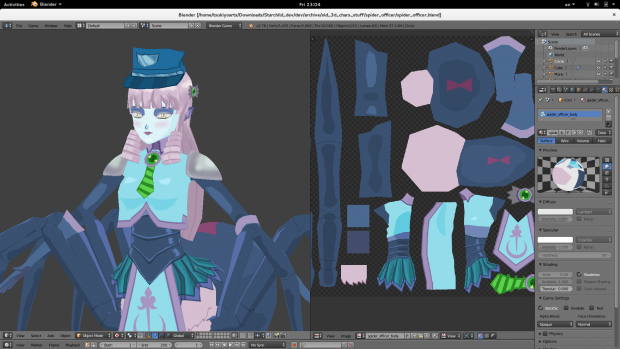 How characters looked like in 3D before, a hint of how they will look at conversations again.

* Thinking of using 3D also for combat due to the richness of motion.

* Rethinking the usage of chibi characters for combat

Project is Not Dead and Never Will

As far as I am aware of, you, a project friend, not necessarily want only major update news articles, which take months to produce due to the hard, game content production and planning involved. Specially when the delay for the next article is being of 2 months already.

Project development available time decreased a lot as I said before since I would now have to do freelancer services like digital art, graphic design and photo restore for survival. Not only that but as mentioned I also keep studying japanese Mondays and Thursdays at Kumon (mostly a self-learning service), also dtudying it at home 7 days a week. Recently I also started studying Brazilian Jiu Jitsu just in case I need one day, I chose this martial style because the school is right in front of my home. All that (except freelancing) due to my next year 2 year visit to Japan, maybe a permanent one. I also had to do some repairs on my notebook all by myself as its support in Brazil (Dell) sucks as expected and was useless.

They will also help keep my mind fresh to work at the Starchild project without gradualy becoming brain blocked (happens when working into a single thing for too much time). I am also learning a lot by working as a freelancer, things I can and am applying to project Starchild.

Remember, the project will live while I live

From the last post to the current I switched from Linux Mint to Linux OpenSuse Leap, I am very satisfied by this choice motivated mostly by curiosity at first. Like I tested Ubuntu, Xubuntu, Lubuntu and even PCBSD before, I tested Fedora too if I recall before making a choice. I liked OpenSuse Leap because it is a middle ground between highly unstable and cutting-edge linux and a corporate, stable, polished yet missing newer features linux, it tells me everything it does unlike other linux I tested, leaving up to me if I want to read just a part of what it tells me or everything, not hiding anything.

It is well projected too, sometimes when I was about to do something dangerous to my desktop without knowing he would warn me and also suggest solutions, that was different. It is also well suited for building the Starchild project for various linux distributions, it was made for that usage. The allowed option of Gnome3 also attracted me, originally before ubuntu forced unity down my throat I used gnome 2. 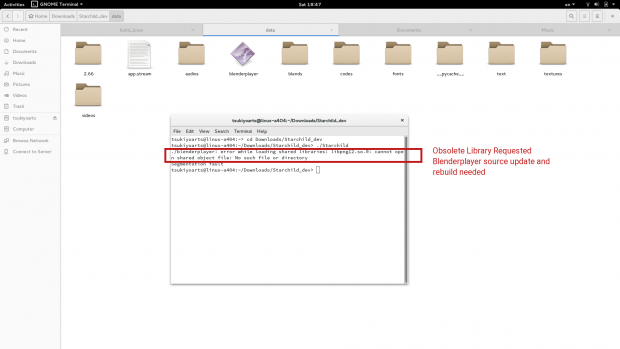 But the Starchild Project was built using an Ubuntu based linux, and now it does not work as it seems OpenSuse Leap uses newer libraries and/or different ones. Anyway it was already time to update the game libraries and the blender player, I have not done that for years I guess. That is why a major update is taking long to happen too, because I will have first to do all this update to the project core software. Only then I will be able to get back to coding the game editor which was the last step to build real playable stuff.

I also switched focus, I no longer have as a goal finishing the full project, I will already get happy with just a finished demo, it is you, who will play the game later who will tell me if you want a complete project, then I would do a kickstarter. With this decision I will be able to put more effort (from the time which still remains daily) at the demo, as I will fully showcase what I am capable of, without restraints, as I would not have to worry about doing the same hard worked quality for the rest of a complete project, since if I do a kickstarter because people demand, I would probably get some help for that with the money earned, then i would become a Team of 2 or 3 people. 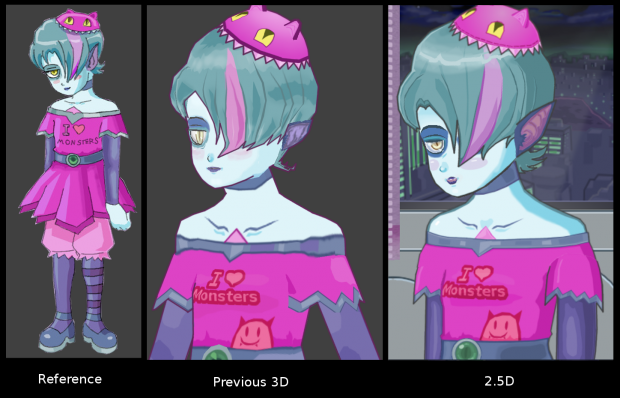 This project development may seem very logical oriented, but there is an instinctive, spiritual component to it too. I already had two dreams in the last 2 months where my game was back to being fully 3D (instead of 2.5D) as it was in the beginning (original plan) before most of the 3D was mostly cut to speed up development (3D take longer to do).

I can not make a full 3D game still (I also liked 2.5D), but what I think I can do is to use once more 3D characters at conversations only, some of them were already finished before the cut, no extra work for them. I truly missed the richness of animation 3D provide. I had cut 3D and use 2.5D because to make it artistic demands computing power and took longer to do, and I wanted the game to work at mobile devices too (tablets for example), but I learned with freelancing which I have to focus in something, thus the game now will be for desktop/notebook computers only.

Previously I made an experiment, quitting Facebook I tested many other social networks for the game project. I left them without active promotion to see which one naturally would bring friends to this project. Google+ and Pinterest failed me. Youtube was good only for storing the videos after all. Linkedin was not good for the project but it is for other things (so I will keep it). I tested behance and deviantart too, and it was not promising regarding the project, but since my profiles on them are new I will leave it below for additional testing. Twitter though is promising.

The goal was not to have many platforms anyway, as this divide my promotion force, so none really stands out that way. The next to be closed regarding game promotion may be behance or deviantart.

Contribute to the project and a Question

I made this article more personal oriented than completely project related, from completely cold logic to more emotional, did you like that? Tell me what you think below, be not afraid. Otherwise I will consider you enjoyed it =)

Thanks for your visit space adventurer! If you liked this project you can help make it happen by liking/following or sharing the pages above (pick your favourite). Also, constructive criticism is much welcome.

The game editor code update continues, and while that happens other small improvements are made simultaneous.

A milestone for the project was achieved, now all which remains is the real gameplay development.

Results of the latest questionnaire, miniature tests, the game chosen music artist and a title change.

Hello space adventurers, although I still wanted to wait more before this news article, I was advised to show any sign of life, so here I am. Lets do...

Hi! I love your project!

Wow!!!
This is an very ambitious project for a team of one. Hope you make it through!
Good luck in your endeavours

Thanks for commenting SamuelSousa. I will, but just for the demo. If people like I will find one or two additional people to help me after the demo.

I Really liked the idea, and i hope to see more!

Thanks for the encouragement Gokento :)

Glad your still working on this project, I see lots of people start up projects and give up within 6 months but you have stayed strong all this time with nice updates on here.

You have put lots of work into this since I first started watching and I really like how things are taking shape. Keep it up!

Thanks for the comment! They are rather scarce here on indiedb. I will never give up on this project, if it stops it is because I'm dead(hopefully it will not happen); what changes is its development speed due to moving from one city to another sometimes, japanese study and other life things, sometimes I have to go away a time to come with a clean mind to the project too.

In more details, I do not give up because I want to finish this project to prove to myself I can finish what I start too, because I already came too far on it and a bit to shame people who when the game was young said this project was horrible and would soon fail, the WIP projects they praised as superior failed sooner than my project which will live as soon as I live, improving as I improve myself, people are actually liking it a lot, which is very good since the project is far from finished, which gives a glimpse of its true future potential.

I´m making this for myself, but mainly for others human beings as it is no fun for one to play his own game, a game is for others.

To me this looks really silly and whimsical. Count me in *Tracks*

Hey, thanks for commenting! Don't forget to click "Track this game" at the top right of this page to be informed when new stuff is posted.

Let me know if you have more to say about this project, your opinion is important.