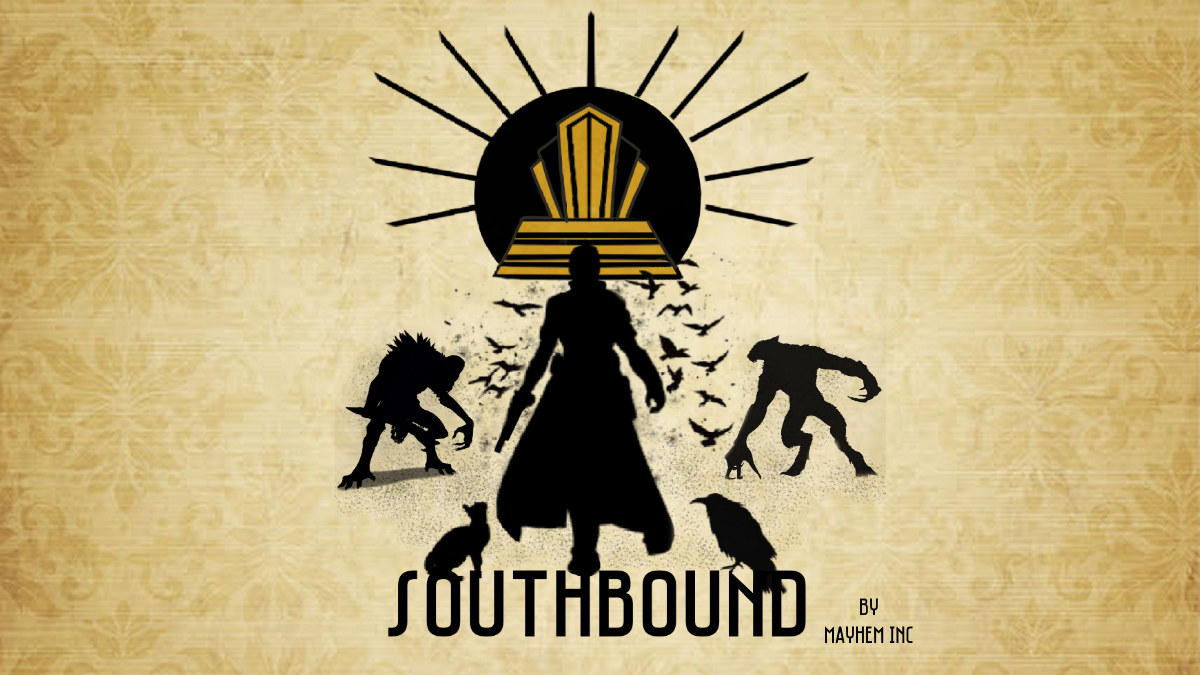 Southbound is our debut game which we are currently working on. Production started in May 2020 - so as you can imagine, we are currently in early development. Soundbound plays off in a time period compiling the architecture and style of the 1900's to the 1940's...and in this world, magick plays an active role.

After a devastating global event, caused by opening of "tears" in the veil separating the world as we know it from the spirit realms, the world rebuilt itself with the guidance of a new overseeing power, known only as The Order. Civilization was re-established and people adapted to a new way of life...mixing the natural with the supernatural.

The delicate balance is maintained by The Order by use of an ancient covenant between humanity and the spirit realms, which is in place to keep the peace between humans and their new neighbors - however some have broken this covenant and actively seek to destroy The Order by whatever means necessary and to claim dominion over the world of man.

The game will follow the exploits of a ruthless Enforcer of The Order, who has been sent to eradicate the anarchists to and restore order by any means necessary.

If you think that the Enforcer you will be playing as is a typical "good guy"...think again. The Order, on the surface, is the scales of balance and order...however anyone or anything standing against them are swiftly taken care of - no matter how big or small the resistance. Enforcers are ruthless, dispatched only to eliminate any resistance or opposition. Enforcers are trained in both magick and weaponry to compliment their tactics.

The tears twisted reality in such a manner, that magick became commonplace. The Order is a magickal organization which existed in shrouded mystery before the global disaster, however they are now the superpower of the new world. Governments still exist, however they all act only with the direction of The Order.

In this "new" world, humanity and the local fauna and flora of Earth are no longer alone - the tears brought forth new creatures of both bestial and higher reasoning. Most people accepted and adapted to this, integrating with the new residents...however, not all humans accept this new way of life and racial strife is abound, directed by a certain extremist group.
This is a small write up thus far, so that you can get an idea of Southbound.

Southbound will be a first-person game, with elements of exploration, combat and more. The world will be divided into "levels", with each level being open-world. The levels will be fully explorable - and 90% of all buildings you see you will be able to enter. Not all exploration will be above-ground.

There will be a level-up system, where you can improve your weapon or magick skills and expand on your capabilities. Combat will be fierce - as an example, a headshot will kill your enemy, but it will also kill you. You will not be able to run through the game in a rush and time-trial missions are non-existant.

The world will be full of mission, apart from the main mission line...and unlike most other games...in Soundbound - your choices and actions WILL have consequences without the nuisance of "moral" or "karmic" retributions or attributes.

Scavenge will be extremely varied, and realistically applicable from place to place without the rarity of assets.

You will be able to play as a male or a female character - and will be voiced.

The architecture, clothing, furniture, weapons etc will be to the eras mentioned - we are taking great care to reproduce this as accurately as possible by examining photos, books and even consulting with historians. No page is left unturned, so to speak - the world will be immersive.

The game will be released on PC and Xbox One exclusively through Microsoft. Don't misunderstand us - they are not our publishers, however we will publish through them making use of ID@Xbox etc.

As time goes by, we will write updates and give more details...this is but a taste of what is in development by us...there is a lot of details we omitted.

As mentioned before - we are a small indie company (literally only two people) working on this (We are not looking to recruit). We are completely self-funded to date, and all aspects of development falls on us (3D modelling, texturing, scripting, animations etc etc etc). Since day 1, we have worked on this game daily (approx. 10 hours per day) - and will not cease until release. We do not have a publisher, nor do we seek a publisher under any circumstances.

We have recently created a Patreon page and "Buy Me A Coffee" page to assist in funding or support. All support will be gladly appreciated.

To promote Southbound and grow its popularity (top games), use the embed code provided on your homepage, blog, forums and elsewhere you desire. Or try our widget.

An fps with both high fantasy and hard core scifi elements bringing together traditional RPG And FPS mechanics into a multiplayer experience like no other...

In a dystopian future, aliens rule the earth, and are building an army of genetically altered soldiers. One of the experiments goes out of control and...

Zelda Sandbox of The Legend Zelda®: Ocarina of Time™ and Majora's Mask™ from the Nintendo® 64.

Heretic was the first game to use the Doom engine outside of id. Produced by John Romero in cooperation of Raven Software, Heretic promises to be a great...

Set at years after the old era ending by the Moon Break Catastrophe. The magic power released from the core of the moon awaken the ancient dark creatures...

The critically-acclaimed and award-winning FPS franchise is back! Packed with tons of fast-paced, adrenaline-fueled single player and multiplayer action...