Smokin' Guns is intended to be a recreation of the "Old West's" great atmosphere. It is being developed on IoQ3's implementation of Id Softwares IdTECH3 engine. This Total Conversion of Q3 includes weapons created with historically correct information about damage, rate of fire, reload time, etc. It also includes gametypes and maps inspired mostly from western styled movies. And to increase the feeling of a "Gunslingers Atmosphere" music tracks and sounds have been adapted to the simulated times. The Smokin' Guns game started its life under the name of Western Quake³. It was originally developed by a team known as Iron Claw Interactive. They released WQ³ beta 2.0 in 2003, after which development all but ceased. In May 2005, development of Western Quake³ was taken over of by a bunch of cowboys calling themselves The Smokin' Guns with the blessings of the former team. Improvements to the game continue to this day!

This is the stand-alone version of the Quake III Arena mod, Western quake 3. You are no longer required to purchase Quake3 in order to play this game. Smokin' Guns engine is now open sourced: you may download our source code at our SourceForge Page. If you have any question or need help, you may ask here on Moddb, or head over to our Forums Page.

All game modes are based on the prize/reward system. Prize/Reward means you get money for kills, with the money being used to buy weaponry, ammunition and special items. The system is weighted so those "better" players are worth more reward money than novices. "By killing a player with more kills than you have, you will get more money than he would earn for killing you." The sentence above demonstrates to you the basic idea of this system: The bad players won't become worse due to the lack of money for weapons, so fair and balanced gameplay is possible. So even if you don't get a lot of kills you can make the ones you do get count!

As the name says the goal of this game type is robbing the bank. One team has to attack the bank and steal the "money bag". The robber's team is equipped with triple dynamite, which allows them to blow a hole in the building and proceed to the money. After grabbing the money, they just have to head back to the escape point with it to win.

Robbing the bank isn't going to be easy because the whole second team is protecting the bank and will try to prevent the other team from getting in. While a robbery might be more difficult to pull off, it will be much more profitable than just killing off the defending team.

The idea of duel is to enable classical western shoot-outs using only pistols. This game type is suitable for 2, 3 or 4 players and also for 2 player teams.

The duel maps are huge maps divided into several parts. Separate Duels can be performed in each part of the map (up to 16 players are supported per map). The details of the duel are as follows: The combatants stand opposite each other while a musical clock starts to play. When the music stops the duel begins. The holstered pistols have to be drawn, it will take a few seconds until one can aim precisely (this will be indicated by the crosshair gradually fading in). During this time the player can decide whether he wants to face his opponent (with poorer chances to hit) or seek cover.

The winner of the duel gets money for his kills and usually stays on the map part he "won" where he will meet the next challenger(s). As you can see, it depends on the amount of players on the server on which map and with whom you play (it's a complicated system and you'll see how it works exactly when it's finished).

Smokin' Guns preserves the classic Deathmatch gameplay found in the Quake series. Players spawn at random areas of the level and must compete against other players in a wild west shootout. The winner is the one who defeats the most opponents in a set time limit. The levels have money and weapons that the player may pick up, and more money is awarded when the player gets a kill. This allows the player up purchase new and better weapons.

In Team Deathmatch mode, the players are divided into two teams. The winning team is the one who defeats the most opponents in a set time limit . Levels remain the same as normal Deathmatch mode.

This mode is a cross between Bank Robbery and Deathmatch. Players are divided into two teams. A point is awarded to the team who defeats the opposing team. The winning team is the first to reach the set amount of points or has the most points in a set time limit. The levels are the same for Deathmatch mode.

The buy menu allows you to purchase equipment using the money you earn for killing people or for accomplishing your mission. By default, pressing the B key will open it. Navigating the buy menu is done with either number keys, or the mouse. Each number has a corresponding item or submenu. In round-based game modes you can only buy equipment when you are in a buying zone. The buying zone is an area around your team's spawn points. Your money display turns yellow when you are in a buying zone. There's also a time limit. In deathmatch game types, equipment can be bought anywhere, anytime 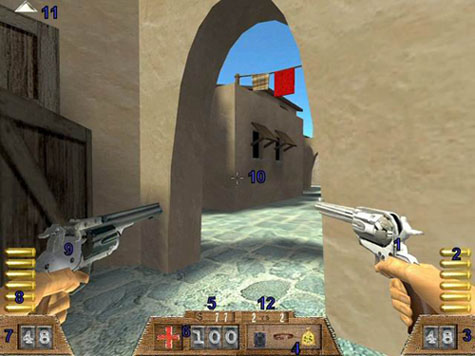 No this is not an allucination !

Smokin'Guns 1.1 is officially released and you still can get it here from our ModDB Downloads page, but also from our new official Downloads page. Yeahah !

You should also realize Smokin'Guns community owns now a great new site based on Drupal and it is launched with a great and smart theme thanks to Biondo, our good friend and talented web designer !
Thank you for all your investment Biondo !

So, new release, new site !! What else ! He he... some other nice news will come soon, but now it's time to thank Joe Kari for his efforts and his desire to push toward Smokin'Guns 1.1 release. You'll find nice new features exposed in his great Alamo II map !! I would like also to thank Torhu for the Windows exe installer and also Barto for his try in a generic Debian package (see our official site) !! And of course, thank you Red and Pardner for your priceless involvement !!!

I would also thank you all for your long time support ! And now my heart is just beating toward our old good friends who were around for years and who are just missing us today...

The fourth round of beta testing has started. Get your newest files!

After another month of improvements, we are happy to announce another beta engine release. This time, 3 maps has been included, and you can now play again...

This release is unofficial but provides everything needed to play Smokin'Guns under Mac systems. Thank you netboot this work.

This is the full game windows installer of Official Smokin' Guns 1.1 Release.

This is the full package of Official Smokin' Guns 1.1 Release.

This is the full package of Smokin' Guns 1.1 Release Candidate 2. Download it, unzip it, and run smokinguns.exe (Windows) or smokinguns.i386 (Linux...

This is the full package for Smokin' Guns 1.1 release candidate 1. Download it, extract it (unzip), and run smokinguns.exe (windows) or smokinguns.i386...

Sooooo can I try this with Quake 3 source port? I'm using my phone to play Quake mods

Anyone still play this? I'd be cool to try. But I kinda wanna assume that Fistful of Frags beat this one out.

Believe it or not, you still see people DM from time to time. Sure it isn't all that active as it used to be, but it isn't completely dead.

I mean, there is still a dedicated deathmatch community for Outlaws.

WHEN people are playing on the servers, this game is awesome. I played for about an hour with about 7 random people. I had a blast. Playing with the bots is fun too, but after a while they get too easy. Although I find running around with the Bowie Knife and just throwing it at them to be quite satisfying.

Really? I'd like to see you try developing a better game yourself.

My computer is quite crappy, is this game very resource demanding?

In our days, we could say this game is NOT very resource demanding. What kind of game are you running fine ?

So this is finally launching for me.

Aye, amazing wester game. Even thought the graphics are undoubtly from the last centuries, the gameplay itself is top-notch and can compete with any multiplayer title out there. The weapons are amazing in both terms, design and technique, the levels are very well designed and remember to a lot of famous western movies. And last but not least, the soundtrack gives you that one high-noon feel you missed since they stopped to produce western movies. Also you can adjust the game with a lot of options…