Rick Future is a classic point and click adventure game set in the ‘Rick Future’ sci-fi universe. Follow Rick Future and his crew through their adventures in deep space and help them solve countless puzzles and uncover the mystery of an ancient spaceship.

‘Rick Future’ is an independent adventure game, being built by a small team without a big budget. Classic point and click gameplay, in beautiful 3d environments!

The Story
A simple routine cargo run leads Rick and the crew of his space ship into the dangerous Gon’Dual sector, near the outer territories. Just delivering a cargo of some freight containers turns into a dangerous threat when they are attacked by pirates who show quite an interest in their seemingly harmless cargo.
Well... and maybe also an interest in collecting the bounty which has been put on Ricks head...

With no choice left Rick maneuvers the Eric, his seasoned and sturdy cargo ship, into the mysterious Corvula nebula to hide from his pursuers. But instead of escaping, the Eric collides with an old alien emergency probe which holds an ancient distress call from a long forgotten alien ship.
And suddenly the crew of the Eric in the middle of a new adventure which leads them through the dangerous Gon’Dual sector, where they do not know who is friend or foe...

Release
The game has been in development for quite a while. We have many more month of development ahead of us and the game will probably see a release sometime in 2016.
Nevertheless we would like to present it here so everybody can follow the development until it eventually gets released.

Captain on the bridge!

During the last weeks we have spent a lot of time designing the Eric’s bridge. We went through quite a few iterations until we ended up with something that we could all agree upon. Coming up with something that visualizes the bridge as it is know from the original stories while keeping it open to everything we need to do with it in the game was a bit tricky. The bridge couldn’t be too huge and empty for example since we need some space for the characters to move around and the navigation system to work properly. Also we needed seating for all three characters in addition to enough open space to walk around an interact with the objects in the location.
The bridge of the Eric can be considered a hub between different locations in the game. In order to travel to different planets or space stations Rick, Hubert or Evi need to be on the bridge and use the navigation computer to plot a course for the destination. This also involves a new little mini-game we haven’t yet talk about :) Furthermore being on the bridge allows you to actually look out in space and see which location you are currently in. This works out really well, since you can look out and see the stars and planets ahead of you or the vast landscape of an alien planet the Eric has just landed on. This really adds something to the mood.

As usual everything is to be considered work-in-progress and we might make further changes and tweaks later on. But it is always good to get stuff out and get feedback, so we wanted to share the current state of the location with you. Have a look at the screenshot below and let us know what you think. As usual all feedback is welcome. 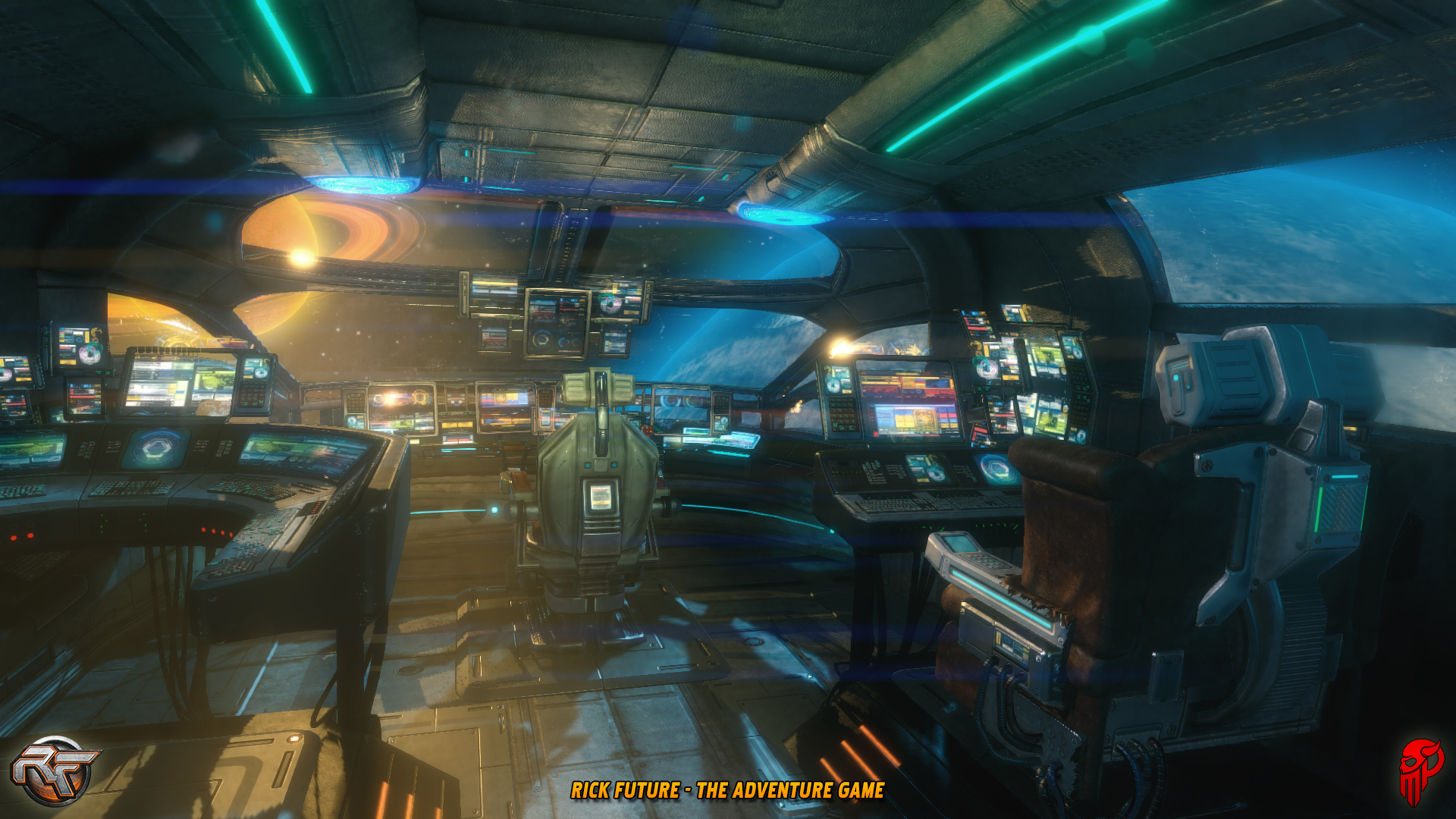 The screenshot was taken in-game and shows the the three stations for Rick, Evi and Hubert. We have the pilot chair with the navigation computer in the front and Hubert and Evi’s stations on the sides. We are still playing around with different camera positions to what looks best. What you see in the screenshot now might not necessarily be the final perspective used in the game, but we couldn’t resist showing you a nice space vista! You can blame our Crytek heritage for this irrepressible urge :) Have fun!

We gave the Rick Future webpage a little makeover and added new screenshots for you! Check out the current state of the character models of Evi and Hubert...

A little update with some Skas'ka I concept art. Showing the promenade deck, the stations security station and a rather dodgy space pub.

To the Moon Adventure