"All controversy begins with DOUBT"

The year is 2047 : A deadly breed of Bioroids have appeared on the artificial island of Neo Kobe...

They are called Snatchers for taking the places and identities of the victims they kill.

You are Gillian Seed, a detective with amnesia who joins the Anti-Snatcher task force J.U.N.K.E.R.

Will you uncover the source of the Snatchers, and recover the memories of your past?

This project is a "remake" based on the original Hideo Kojima game Snatcher.

The goal is to faithfully re-create the classic 2D game in an explorable 3D world.

*This game is completely unofficial, not-for-profit, and is not endorsed by Konami.*

“This idea of an open world in 3D is very good, and I would love to do something like Snatcher, but I do not have the time or the means to do so.

but if anyone else would like to develop it, I would love it.” – Hideo Kojima 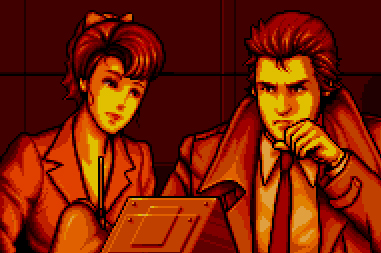 I'd like to welcome our newest Musician to the Team!
I figured you could be listening instead of reading about the work... ;)


You can check out Dee's music here : Soundcloud.com
There is some new Artwork, and an updated WIP render of the "Snatcher(s)" to check out!
We are still *looking for talented + dedicated Programmers, and 3D Modelers!*

I've been slacking on the "news" posts lately, so here's a little info ;)

Big changes for the mod this July...The CryEngine 3 is out!

In this update I introduce the newest member to the "Team" and more...

It's been a long time since I've posted news, so here's what is going on!

Is this going to be finished ever?

Hey, it's RVGN again. Can I please have an update if you have any info to share on the project?

To everyone following the Project :
*FREE Neo Kobe Pizza for ALL of you (non-trolls)* lol! ;)

Yep, this mod is dead in the water. Wanking around with VR gimmicks before you even have a tangible idea of how you want to structure the game (how long has this mod been floating in purgatory - er - "Development", you call it?). Needlessly porting the half-assed assets you - by some miracle - actually managed to finish to different versions of CryEngine (literally no reason for you to do this at all).

This clown has no intention of finishing this pile at all. Just a big wank, this mod is.

I've REALLY enjoyed the past 17 months of "prototype" VR...

Today you can finally pre-order a retail/consumer Oculus Rift! :P

CHOO CHOO!!! SEE YOU ON THE VR HYPE TRAIN!