What is Project: CARDS ?

Project: CARDS is a turn-based strategy game, taking place in a huge, procedurally generated, persistent online world : Dyndria. In Dyndria six gods are fighting for the rule of the land, and the card keepers, hand picked by the gods, are the pawns in this war. These chosen few wield the cards, special magical items of great power forged from the ancient mythia crystals. When invoked by the card keepers, these cards can summon powerful mythical creatures and cast spells of awesome power.

At the beginning you are chosen by one of the gods and from then on you are fighting for that diety. You start out with nothing than your bare hands, but after you have taken the life force of a chosen creature, he will spawn your first card. By killing more and more monsters and taking over ancient shrines belonging to enemy factions ( which are strategically located near the mythia crystals) you get more and more cards. Your deck grows and gets stronger. Soon you will be able to summon creatures, cast spells, set traps, enchant friends and foes or forge magical equipment for yourself.

To keep the experience as fluid and fast paced as possible, you only directly control your avatar. All your creatures will move, attack or execute other abilities automatically. This also means though, that the hero is always the core of your army. You can't sit back with your avatar and let your creatures do the rest. The avatar has to be right in the middle of the action to be most efficient and summon the right creates and spells when and where they are needed.

We have a few more plans on other procedural content, coop- and vs modes, etc, and will give out more information as soon as they start taking shape. So hang in there!

We are currently working on Alpha version 0.1. The first few versions will be open for to the team only, then we'll open up to a small, but growing group of 'TEST SUBJECTS' ;) After that, we'll get the game out for the general public, and everyone can join and play an open beta. But till then a lot of code needs to be done and a lot of graphics need to be made. If you are interested in being a part of the private alpha phase, just send us (Inko or LamentConfig) a message, and we will see what we can do.

From concept to reality - details on the first game of Project: CARDS

In the cold wintry months of February, Inko and I had been in deep discussion over a hypothetical card based strategy game. Just think - a game of “Magic: The Gathering” with several players ganging up on a guy with an Über deck, with locational information and procedural content thrown into the mix. It was awesome, it was amazing. It was clearly the Next Big Thing.

Long lists of card attributes and skills were copied and pasted between us. The central part of the game is the battle system, but with all these mechanics and thoughts being thrown about and with the coding workload shared between us, however were we going to formalize our awesome set of rules? The answer was glaringly obvious.

We would play the game without coding the game. On the 6th February 2011 the first ever game of Project: CARDS took place on our internal wiki. Using nothing but simple wiki formatting, and a lot of hurriedly coloured in hex sheets we saw our game turn from a fuzzy system of ideas into a definite set of rules. 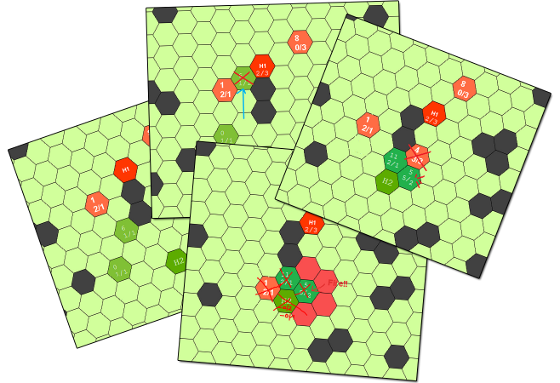 This experience, for both of us, was a very valuable one. We both learnt what the other truly expected from the combat system and actually started to have more of an idea of what the attributes we had spoken about actually meant in game.

To start we both constructed ten cards each – a mixture of spells and creatures. We both had an identical deck of 20 cards but shuffled randomly. We kept the map environment small in order to get to combat faster. Mana (used in summoning the cards) would grow at a steady rate for each player. We both agreed to keep our hands public and at every turn explain why we were doing what we were doing. Decided by random coin toss, Inko had the honour of making the first move, which consisted of him running towards me at full pelt conserving his mana to lay on the proverbial smack down.

My overall strategy, as I had been dealt a number of nice creatures was to, well, summon them all and hide behind them like an abject coward and hope they wiped the floor with Inko before he reached me. I kept moving away from the ever-closer Inko, and as I moved I cast creatures between him and myself.

Inko kept advancing, ignoring my ever-growing collection of creatures, hell bent on doing nothing but wiping me from the face of the world. Monster after monster was being cast now, from both sides, Inko opting for fast moving creatures, whereas I preferred the larger monsters (mostly because they are easier to hide behind). Fireballs started flying towards me, melting my creatures and most of my health in the process. As a last resort, I summoned the Ultimate Creature: utterly powerful, ridiculous health, and a mana cost which put even England's level of debt to shame – I summoned the uber powerful…

Well, yes, really, the name isn't so important. It was my last chance. In a massive flash of mana I summoned the most stupidly over-powered creature Inko and I had conceived. Unphased by this avatar of death standing in front of me, Inko cast one last fireball and I watched as it sailed toward me, hitting my ultimate creation (which shrugged off the blast) and then realized that when it hits, it turns into an area effect spell, and promptly melts my face off, causing the last of my life to trickle away and leaving Inko to celebrate his victory. Probably by desecrating my melty remains or something.

Pretty epic stuff. But, aside from being a lot of fun, how useful was it?

In one word – exceedingly.

Firstly, and most importantly in my mind, it helped established that the game we were playing was actually fun. The rules were simple, the action fast and yes, it really was a lot of fun. You can have all the graphics in the world and all the complex game mechanics you want – but unless it is enjoyable to play what is the point of making a game?

Secondly, it helped us see how the game mechanics worked together – some things which looked really good on paper were either pointless in game or massively over-powered. One example of this was attack range – initially a large percentage of the creatures could attack things not directly next to it. This proved massively over-powered, as a small pack of Inko's wolves managed to take out several of my more massive creatures before they had a chance to react.

Thirdly, it helped us cement our visions of the game together. Small things which we hadn't actually discussed became very obvious issues on play through – initially, Inko imagined a summoning range around his character in which it was ok to summon creatures, I had assumed that creatures would be summoned right next to my hero. Little things like this, spotted at this point in development, helped save potential headaches down the line.

Finally, and I think this is probably just as important as my first point, it gave us a game. We had actually played the game we had been talking about. As silly as it sounds, this helped stir both of us into an even bigger frenzy than we had been initially. It gave Project: CARDS an almost physical form. We had stopped just talking, and actually played the game which had so consumed us. What I am trying to say, I guess, is that it gave Project: CARDS a tangible form. It was real to both of us now.

So, let this be my advice to anyone out there who is in discussion about an uber hypothetical indie game – play it. Before you code, before you get into design decisions or discussions about art style or lore, just play it :)

To reward Inko's victory over me, I thought I would create this wonderful bit of artwork so we could both remember who beat who in the first playtest :)

Finally some infos. Yeaaay! Soooo... We need 50 characters for the summery, ha? Uhm... How is everybody? Feeling fine I hope! yaaaahhh...

Hum, no news over pretty long period. Is this project still alive?

I'm not quite sure what should I expect from this game... There are too many different features that must be combinated, hard work. But I like cards and strategies so... why not?

From preliminary stuff it seems promising. Hope it really gest off the ground!

idd, though I'll wait for some updates and more information before I track this.

Totally understand you! We'll get some first infos up this weekend. Anyway, big thanks to everyone who is already tracking the game. You guys are awesome ;)

Wizards and Warlords Turn Based Strategy

Thea: The Awakening Turn Based Strategy