The Elder Scrolls III: Morrowind is an epic, open-ended single-player game where you create and play any kind of character you can imagine. Be the noble hero embarking on an epic quest, or an insidious thief rising to leadership of his guild. Be a malevolent sorcerer developing the ultimate spell of destruction, or a reverent healer searching for the cure to a plague. Your actions define your character, and your gameplay changes and evolves in response to your actions. Confront the assassins' guild, and they take out a contract on you. Impress them, and they try to recruit you instead. No two sagas are the same in the world of Morrowind. Gameplay is further extended with the inclusion of The Elder Scrolls Construction Set (bundled with the game). This powerful tool is being used to create the entire game, and will also allow players to modify and add to Morrowind in any way they see fit. Change character or creature attributes and skills, introduce new weapons or dungeons into the...

This, to my mind, is the trickiest tutorial so far. It is probably the subject that confused me the most when I started writing the Five Keys. Some of you may well find it simpler to grasp than I did, and hopefully, with this guide, that is the intention.

This, to my mind, is the trickiest tutorial so far. It is probably the subject that confused me the most when I started writing the Five Keys. Some of you may well find it simpler to grasp than I did, and hopefully, with this guide, that is the intention.

First off, I'm going to start with a section of the help file that comes straight out of the Construction Set. It explains the basic functions of the Faction Screen, for which I provide a screenshot of the Five Keys' Red Hand Faction.

Opens the faction window, where factions and their properties can be defined. The main things that are defined are what the requirements are for each rank in terms of skills and traits, and the disposition of this faction towards other factions. Everything else for the faction must be checked in the individual NPCs. This includes the actual tasks to be given a rank increase and the actual services.

The NPCs can reference the data seen here. For example, Misa Drora, a member of The New Temple, can check to see if the PC’s skills meet the requirements for rank 3, and offer a quest if they do. If they do not meet the requirements, she can say so without giving specifics. She can mention the skills and such that are important, if she is scripted to do so.

Name: (2) The name of the faction as it appears to the player. (character limit: 32)

Favored Skills: (3) The entire list of skills with favored ones highlighted (these are also moved to the top, so they can be seen easily).

Rank Name: (2) List of rank names. If edited here, they trickle down to duplicate locations of that rank.

Attribute: (4) There are two of these. For each rank, the attribute level must be reached.

Primary Skill: (4) The value that at least one of the favored skills must reach for rank advancement.

Favored Skill: (3) The value that all of the favored skills must reach for rank advancement.

Hidden from PC: (2) The faction will not be displayed to the player during the game. 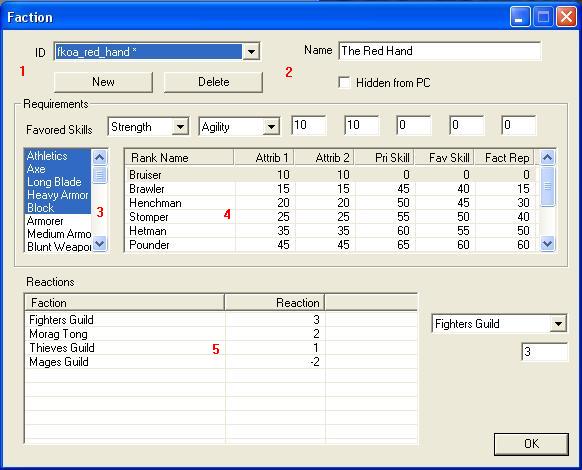 Open up the CS and arrange it to suit your needs. Go to the Main Menu|Character|Faction entry to open up the Faction screen. Try looking at the various pre-coded Morrowind factions by selecting a faction via the ID dropdown box. Notice that I gave my Red Hand faction the ID 'fkoa_red_hand' so as to make players and modders aware that the Red Hand is a faction created specifically for the Five Keys of Azura mod. You don't have to do this, but it is helpful to other modders to know which mod created which character, faction, weapon etc. Give the faction a more meaningful name in the Name box.

Now take a look at the Red Hand faction. Note the primary attributes of a Red Hand member - Strength and Agility. Look at the favoured skills highlighted in blue. Check out the Rank Names in box 4; drag the right hand bar down to see all of them. I have ten ranks in the Red Hand; your faction can contain less or more, as you wish.

Note the values in the five boxes along the line for Strength and Agility. Now, select a different rank name and see the values in those boxes change to reflect the new, highlighted rank. As you move up the ranks, the values get higher in order to reflect the higher status. It is up to you, the modder, to set the rank names and their associated values. The columns in this table reflect the values of each of the attributes, skills and faction reputation. Check out the Bruiser rank, the lowest level recruit in the Red Hand. His required Strength and Agility attributes are both 10. There is no requirement for this novice to demonstrate primary or favoured skills, and his reputation within the Hand is 0. The more rank you attain in the faction, the more reputation you gain; it's all a matter of respect.

Finally, take a look at box 5, the reactions table. These are the reactions to your faction from members of the other factions. The value is positive for a high regard and respect, negative otherwise. The values get into this table by using the dropdown box on the right to select a faction, then setting a value in the box below. Note how the Fighters Guild faction has a fair amount of respect for the Red Hand, since each of the factions is made up of warriors. On the other hand, the Mages Guild does not particularly respect the Hand. It's up to you to decide which factions hold your new faction in high regard, and those that don't.

So, now we've gone through the basic screen, it's time to think about a new faction and how we are going to create it. First, we need a name and ID for the faction. Since this tutorial is still based on the Five Keys mod, we should name it accordingly. Maybe we could create a faction for fighters/assassins that can fight well in, and out of body armour. What about calling this faction the Black Guard? Strong and agile characters that are capable of moving around stealthily, and killing quickly with both long and short blades. Let's do it, then. Click on the NEW button to begin creating the Black Guard faction

In the pop-up window, type in the name 'fkoa_black_guard'. Put the actual name in the NAME box on the right. 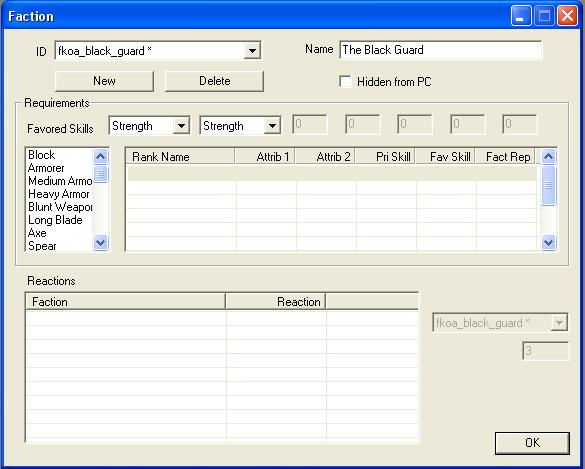 Now for the two main attributes. This is a fighter/assassin faction and we're going to need these characters to be quite agile, so lets pick agility for the first attribute. It's then a toss-up as to whether we choose strength or speed as the second. Because this fighter is going to be crossed with an assassin, I don't think that strength would be a good choice since he probably wouldn't expect to wear heavy armour, so I'm going to set the second attribute to be speed.

It's time to think about what the favoured skills would be for this dual-class faction. I think the choices would be such that characters of this faction would need to wear light to medium armour and use the same weight of weapons. So, we can rule out all the magical skills immediately since members of this faction are not likely to be mages. The fact that any member would be an assassin would most certainly rule out wielding blunt weapons, axes and spears. That means we're left with the following : medium armour, long blade, light armour and short blade. The auxilliary skills being block, athletics, unarmoured, sneak, security, acrobatics, marksman, armourer and hand to hand. Of these, I don't think security or marksman would particularly be required.

We now need to choose four or five favoured skills. The primary skill will be the one that a member of this faction would be likely to acquire the quickest. So, that's either of the first four; medium armour, long blade, light armour and short blade. Of these four I would probably choose two skills that would be considered as primary, say long blade and medium armour. We then have to choose another three skills from the second batch as our favoured skills. I would pick sneak, acrobatics and athletics. You may decide differently. Just remember that your character will develop some skills more quicky than others, so you need to choose wisely.

Let's mark these skills in the favoured skills list. Tick the ones you wish to make favourites and they will be turned blue and moved to the top of the list. See the screenshot below. 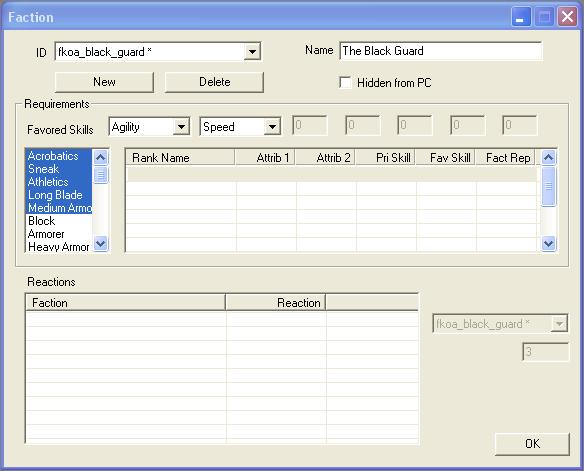 Let's move on to the ranks section (4). We need to set attainment values for the attributes, skills and faction rep. Plus, we need names for each level within the grid. Decide how many levels your members will be required to progress through from the raw recruit to the expert. Then work out the values for each level. I chose ten levels for the Red Hand. Something between five and ten would probably be appropriate. Take a look at the standard Morrowind factions to get an idea of levels and values to use.

I've got you started with the first two levels. But, ultimately, it's your decision on how you name the levels, and the values for attributes and skills that you use. To create the rank names just click twice into a 'Rank Name' cell and start typing. Then type the other values into the appropriate boxes after the Agility and Speed boxes. 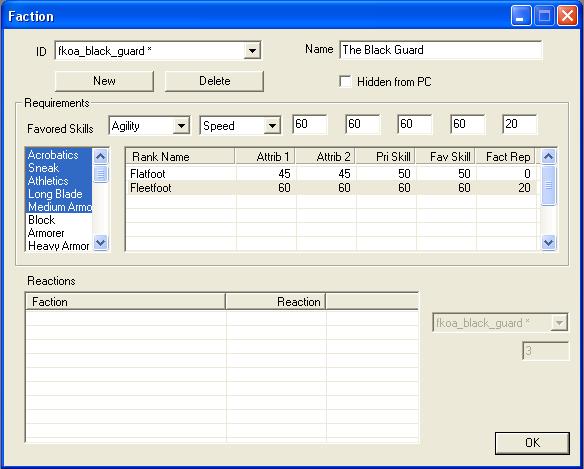 Finally, we should set out the reactions to the Black Guard by other factions in Morrowind. You decide which factions are going to react well, and those that are likely to react badly to a new faction. Chances are that the Fighters Guild and the Morag Tong would be somewhere in the middle ground with the others pro or against. The Imperial Legion and the Mages Guild would probably be quite anti, whilst the Temple might be swayed the other way if it saw that your faction did some good deeds. Make your mind up and make your choices.

To get started you need to right click in the grid and choose new. Then use the dropdown to select another faction and mark the reaction in the box below. 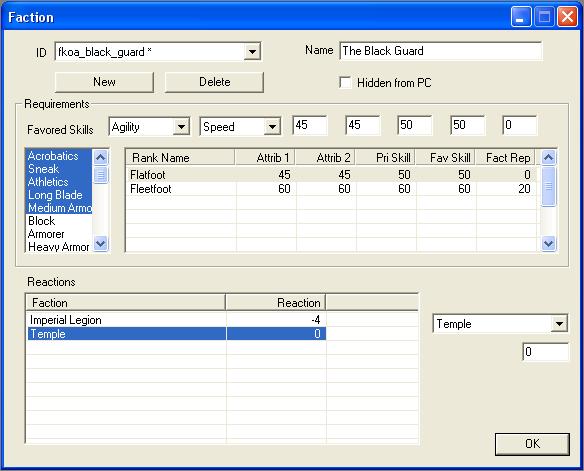 In this tutorial, you have learnt how to use the Faction creation screen to create a new faction, then setup the skills and attributes for that faction.

Here's an updated version of the keyboard shortcuts that you have learnt so far.

In the next tutorial we'll tackle dialog in the Morrowind Construction Set, and focus on how to provide a set of dialog specifically for your new faction.