After a year and a half in development, Metal Venture is finally ready. It's the largest project I've worked on so far. This game is a top-down shooter, inspired from the Robokill flash game, but different in many ways. A world with a story, consisting of 9 levels is included. Documentation covering the basic aspects of the Level Editor is available. I hope that people will have fun and be creative, making their own worlds, stories and custom graphics. Visit Metalventure.forumotion.net and become part of the Metal Venture community!

Technical Stuff:
The game starts in fullscreen mode. If you don't want this, open the options.ini file in the game directory, find the line:
fullscreen=1
and change it into:
fullscreen=0

For nVidia fraphics card users: If graphics look glitchy, do the following:
Go to the nVidia display control panel, go to the Adjust Image Settings with Preview and move the slider to "Quality" preset. Alternatively, enable antialiasing in the nVidia display control panel. This is by no means a "Metal Venture" issue, but a "Game Maker 7" issue, I went through a lot of pain in order to determine the source of this graphical glitch, and then a few expert members at the Game Maker community told me what this was all about.

Additional ambiance and sound effects:
Freesound.org - special thanks to ERH

So, after, like, 4 years since the game came out I was sitting on my PC, writing a new game in Game Maker 8. And then it came: "Hey! Let's recompile the code in Game Maker 8 (Metal Venture was created in Game Maker 7) and see what happens! Plus, I always wanted to fix this error or that, so let's upload a new version as well!"

Long story short, porting the game code to GM8 was a bitch. A fickle, booby-trapped, mind-boggling, keyboard-bashing, time dilation bitch. And that was the soft way to describe it. 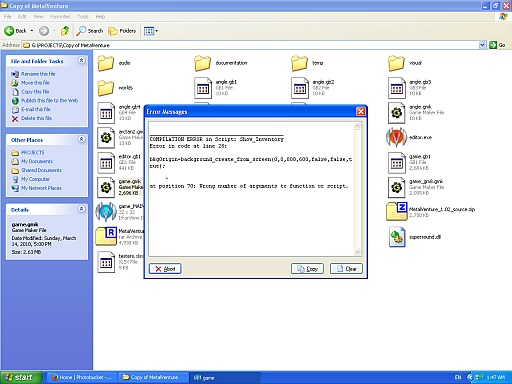 "Congratulations! You are the 1,000th error message! Please help yourself to yet another glorious code clusterf**k!"

It didn't take *that* much of a time. It was just that I encountered the most retarded and non-obvious incompatibilities and function rewrites.

And the result? Well, Gm8 is faster, although modern machines (modern=up to 5 years old) will notice no difference.

It's been 4 years since I released this game. Now that I look back (and I literally had to look back at that mess of a code I've written), I realize that I've learned much since.

But perhaps the most important thing that I've learned is how hard it is to create a self-sustained community around a game with level editing capabilities.

4 years, thousands of downloads all over the internets (I google the game from time to time to see where else it has been uploaded/reviewed and sum up download counts - it has to be well over 10, 000 from various web sites so far), but that was it. Only one custom map, and that doesn't even count, because it was made by a friend of mine.

I created a game forum where people would post their creations and rant about whatever they want, but, well, it died pretty quickly. Which also ties in with a general conclusion I've drawn about the decline in forum activity the past few years. Seems like NSA smokescreens like Facebook etc have drawn the life out of forums, but this is a discussion probably suited for another article...

The first custom world for Metal Venture is here! After the events of the original game, Herbert faces a new threat: the discovery of an unknown alien...

1.03 resolves the main world's level 8 forcefield issue. Now you can get past the forcefield. Read the full article for a way to get past it if you're...

Metal Venture: Creating is just as fun as playing.

A small presentation of the game and its level editing capabilities.

Metal Venture 1.03 full version includes all patches up till now.

I do stupid mistakes. Many people complained about A dormant Menace level 8 not being beatable because the forcefield wouldn't go down. I did a little...

Just tried the method Dravus suggested, no more spacebar errors for me. :)

When I activate some pads the game crashes with an error window.

It seems like way too many people try to play the game while not paying attention to the system requirements or the OS.

Not Windows XP->Anything can happen.

This game has been around for over two years, and yet no one has managed to exactly replicate and define any bugs pertaining to game crashing when displaying menus, not being able to save etc.

Furthermore, many people have beaten the game whith no problems/crashes whatsoever.

So in your case it is either
a) a below min specs system (especially graphics card)
b) an OS which Game Maker doesn't like
c) an inherent Game Maker bug itself, which is something I can't do anything about.

I'm guessing it's a vista/win7 thing then. The game plays smooth, even with a lot going on, so I think I'm okay on the system specs front, but when I activate a few different types of pads, the game (sometimes) gives me an error message and crashes. Something about there not being a known action when spacebar is pushed. Just thought I'd let you know in case it was useful. Sorry if it's not.

Indeed, it's a Game Maker hate case towards how Windows Vista/7 handles file input/output. Not much I can do about it... :(

Is there any place to get more maps for this?

You can find another one here:
Metalventure.forumotion.net

small problem....the game crashs when trying to save during the campaign

I have the error....I can paste it here if you want....dunno Desuras messaging system yet

never mind....the game just didn't put a save folder in the campaign folder....after I made a folder it played fine

I'm having the same problem except I couldn't get it to work D:<, it sucks because it looks like such a fun game...