Manifold Garden (previously known as Relativity) is an exploration-puzzle game that imagines a universe with a different set of physical laws. Set in an Escher-esque world filled with secrets and mysteries, you utilize a unique gravity-manipulation mechanic to turn walls into floors. Learn to see the world through whole new perspectives as you navigate mindboggling architecture and solve seemingly impossible puzzles. Manifold Garden is being designed and developed by William Chyr, and is intended to be released on PC and PS4.

Hey all!
This a long overdue update. Some of you have been wondering if the project is dead. It's not! Far from it.
I've just been really busy these last few months, and have fallen behind with updating this page. I really like IndieDB, but formatting each post can be a bit tedious.
If you're interested in staying up-to-date with the project and seeing new screenshots on a more regular basis, I encourage you to follow me on twitter: @willychyr. It's a lot easier for me to share stuff over there. 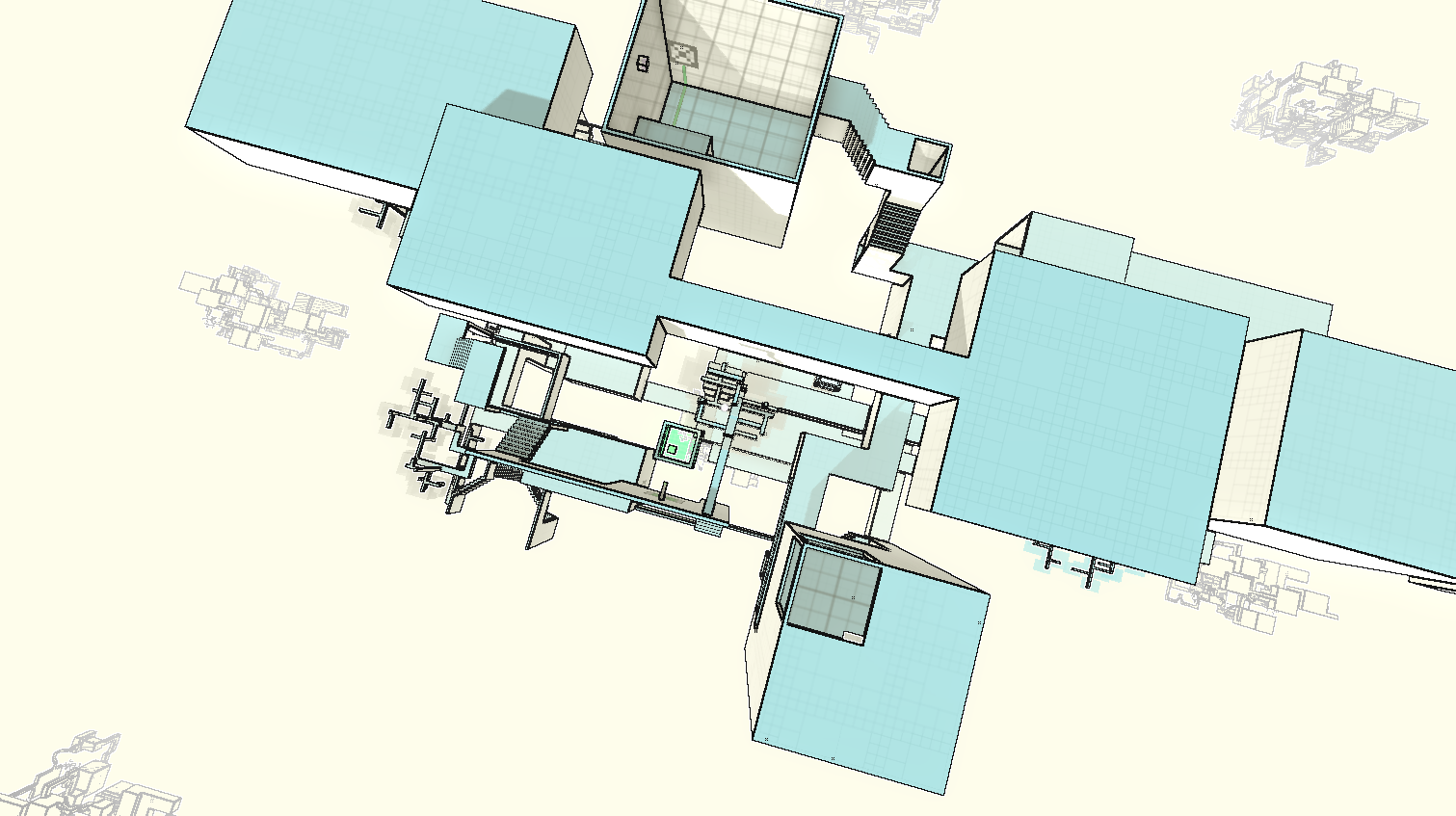 After the last update here, I showed Relativity at PAX East as part of the Indie MEGABOOTH. I was in the Indie MINIBOOTH area, and the entire experience was very positive. I got a lot of playtesters and received some really great feedback.

If you're interested in what it's like to show at PAX East, I wrote up a blog post about my experience, which you can read here.

Then, earlier in June, I exhibited at Indy PopCon in Indianapolis. This was a much smaller convention than PAX East, and also wasn't specifically focused on video games. There was some new and interesting insight from this, which I've written about here.

Sky
One feedback I've gotten from a lot of developers I've shown the game to, especially with regards to Relativity's visual style, is that the sky is too empty.

A large part of this has been due to the game's mechanic. Because you can rotate onto different surfaces, and orientate yourself along any of the 3 main axes, there is no limit in terms of locomotion. In other words, pretty much everything that you can see, you can get to.

For me, in designing the game, I really want to embrace this. I've always hated games that prevent you from going somewhere by using invisible walls, or respawning you somewhere else when you step outside of the bounds. For example, in Bioshock Infinite, they've created a beautiful world, but you cannot stray from the path the designers intended you to go on. Everytime you try to do that, they've placed all thess invisible colliders to stop you. To me, this really irks me as it takes me out of the experience, and makes it not immersive at all.

So in Relativity, I wanted it to be such that, anything the player can see, the player can get to. This means that I can't really have a skybox showing mountains or other geometry in the distance, because either I would have to create all that geometry, in which case the game becomes too open, or I have to somehow prevent the player from getting there, which breaks the consistency of my logic.

Falling Off
Another design issue I had, once I made it so that the player could go outside and walk around in the exterior of the space, was, "What happens when the player falls off?"

Originally, I just made it so that if the player fell off, the screen would fade to black, and the player would respawn in the last place he was standing at.

You can see that here:

I implemented this mostly because that was how a lot of other games did it.

However, while watching Alexander Bruce's GDC Talk on the design of Antichamber, one thing really struck me. He talked about how he eliminated death because it made the experience non-immersive. He brings up the example of Portal, which goes to lengths to create an immersive experience, but then you get shot and die, and respawn at a previous checkpoint, which really breaks the immersion.

For me, an important design choice I've made has been to eliminate all unnecessary UI. In the game, there are no maps, no inventory, no splash screen, no loading scene. I've gone to lengths to create a entirely seamless world, so why am I now having the screen fade to black and have the player respawn? It just didn't make any sense.

I thought about this, and realized I could get around having to respawn the player by simply having the world wrap around itself. This way, if the player fell off, they would eventually just fall back on the world itself. This meant also that I would solve the issue of having a blank sky, because I would just have repetitions of the world in the sky, like the way things look when you stand between two mirrors.

This is what that looks like (it's sped up to make the fall faster for the gif):

There are of course some bugs, such as occasionally when you fall through the floor and into the room below:

Here are some more screenshots of the infinite repeating world from different directions: 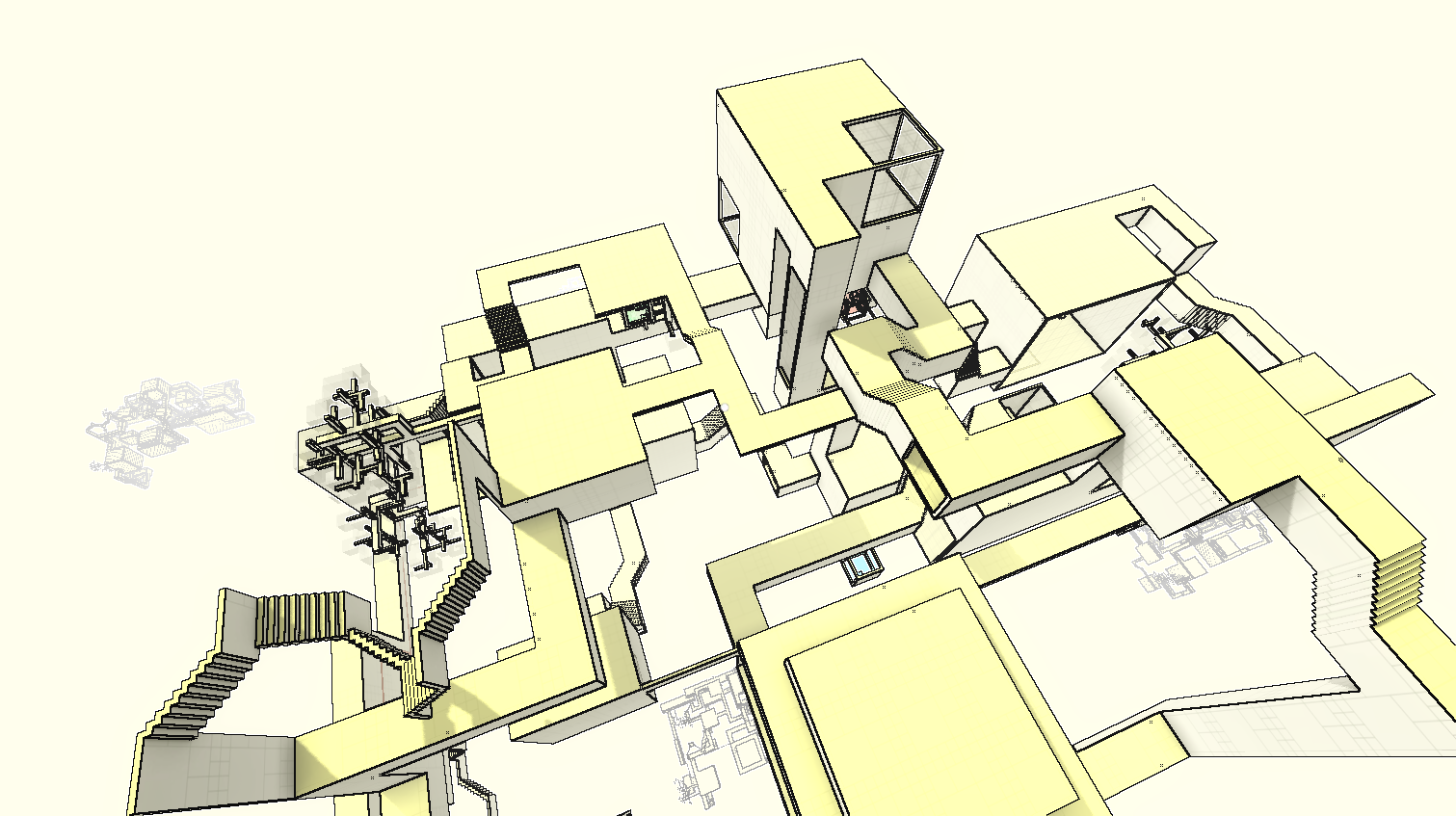 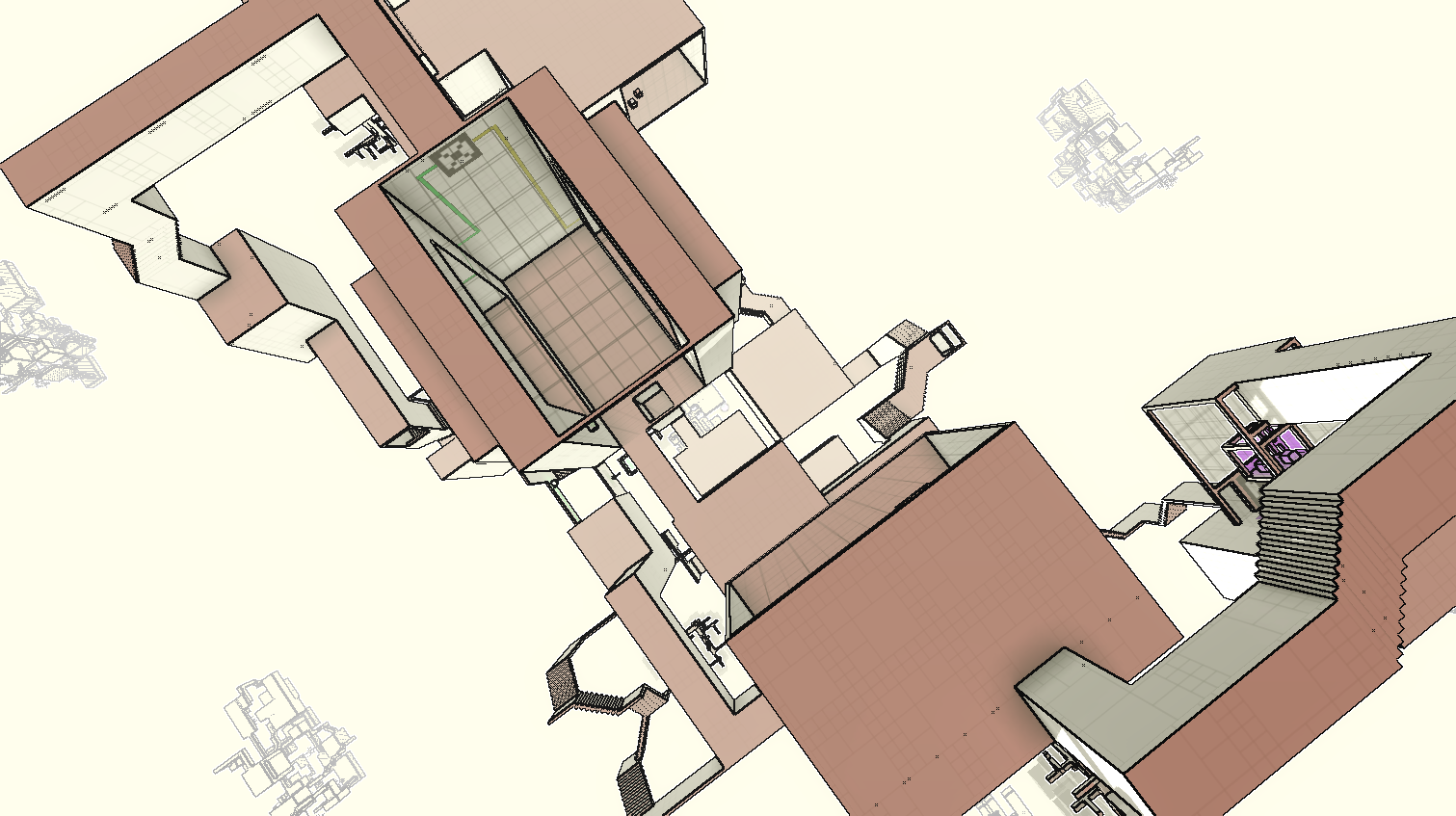 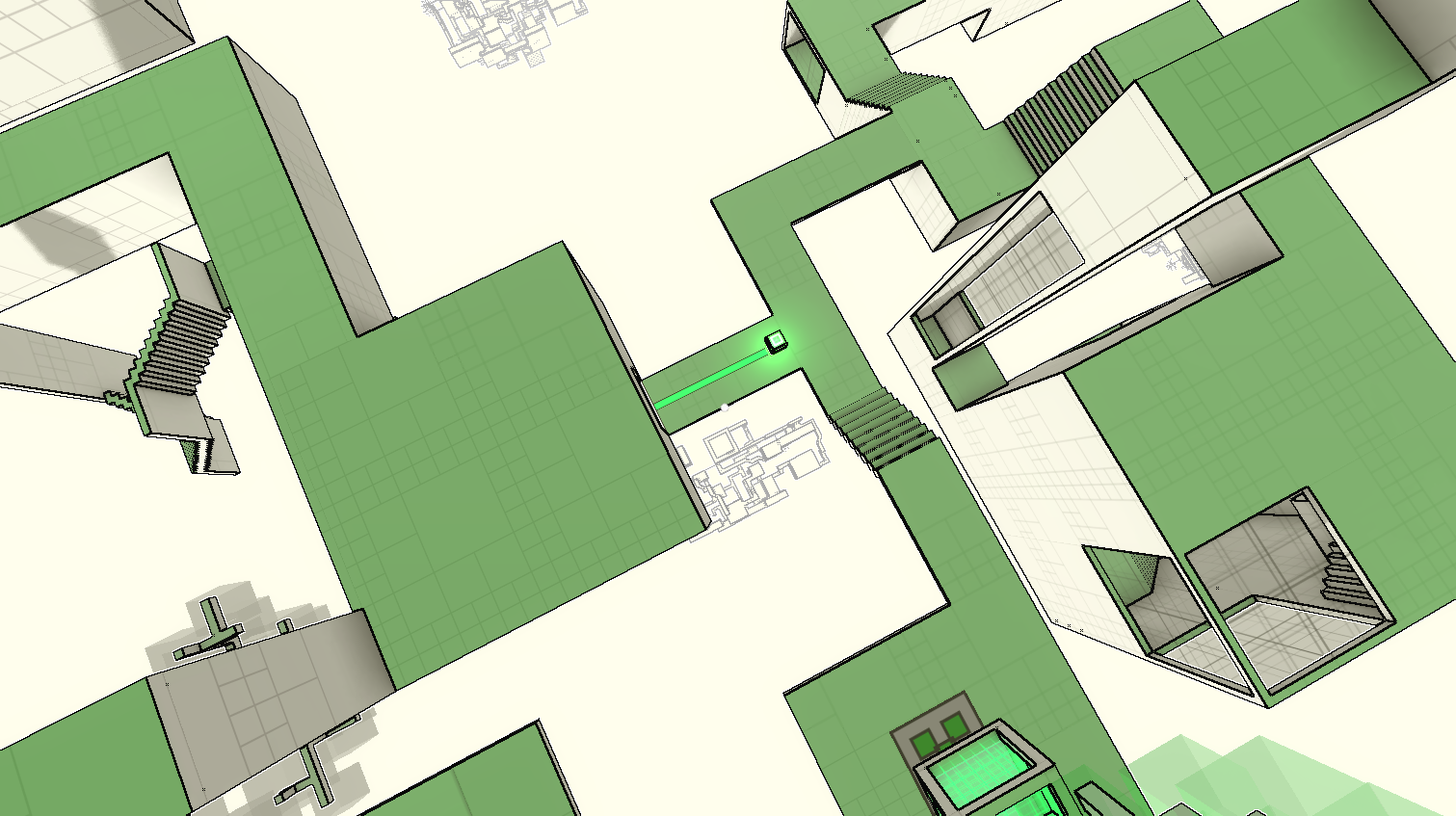 Current Plan
At this point, the first 1.5 hours of the game is very well-polished as far as puzzle design is concerned. I've done a lot of playtesting for this area, and have iterated quite a bit. The order in which puzzles are introduced is pretty much finalized. There is still some work to be done with regards to pacing (such as having "nature" areas that are more open and relax to counter puzzle fatigue), and of course, sound and visual design. But most of that will come later in development.

I'm focusing now on some new mechanics. So instead of making small adjustments to puzzles, I'm building lots of new levels from scratch. I'm hoping to start regularly playtesting these puzzles soon, and to repeat the process of iteration and playtest until these puzzles are as good as the ones already in the game.

Here are some shots of the puzzles I'm working on: 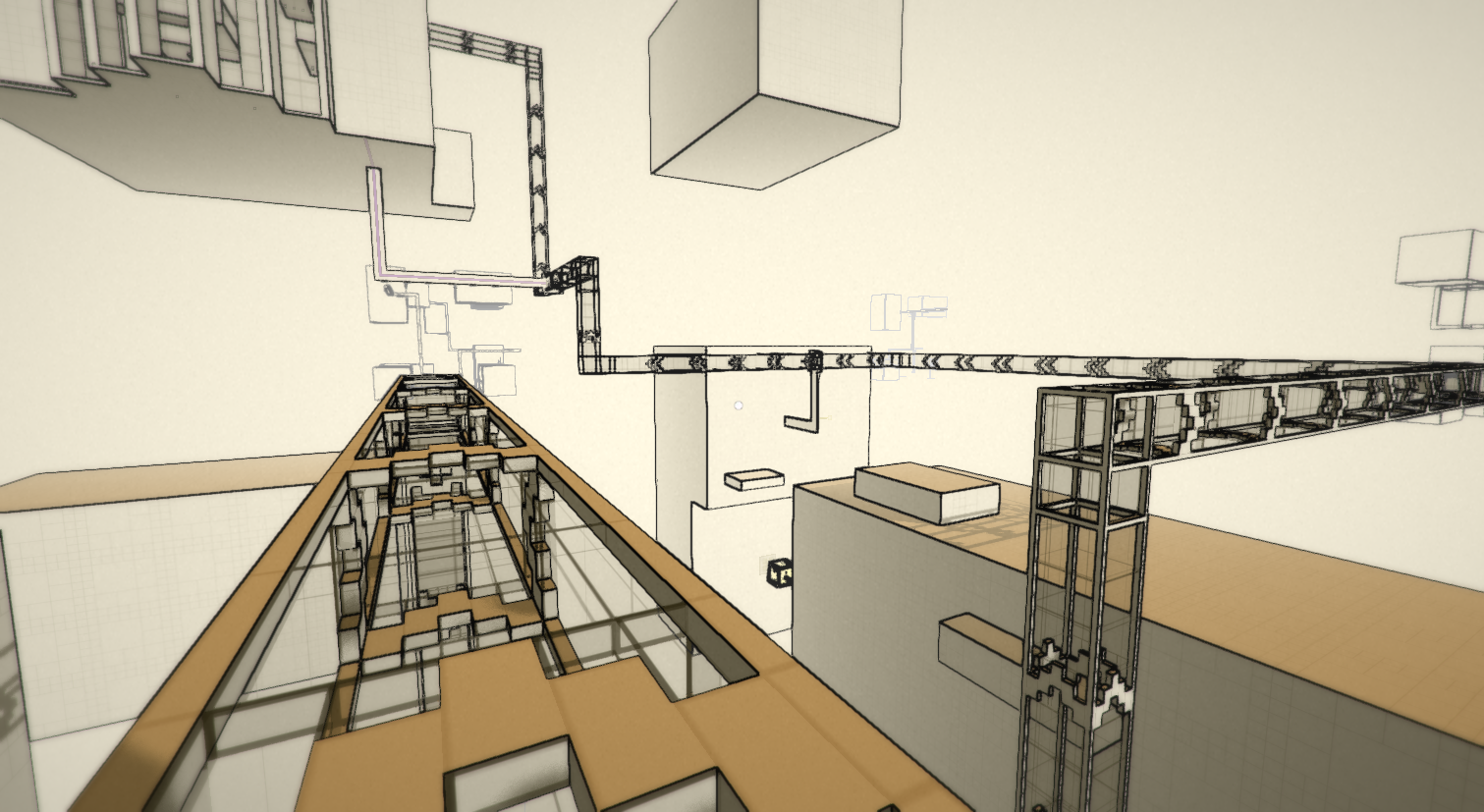 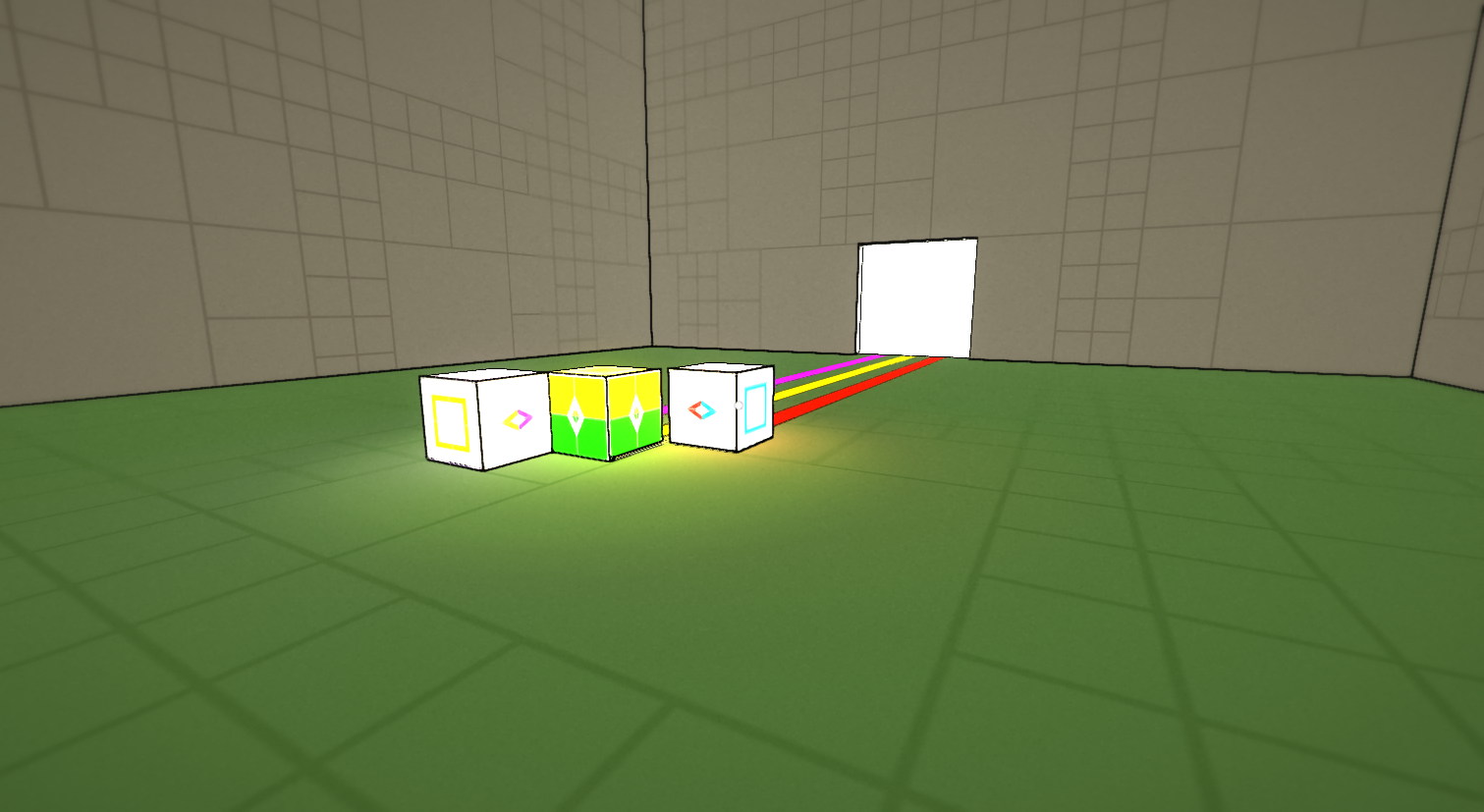 Pleased to announce that Relativity will be on exhibit at PAX East as part of the Indie MEGABOOTH. Plus, here's a whole new art style for the game!

I attended GDC earlier this month, and got feedback from various game designers and developers. Here are some the insights and lessons I learned regarding...

Spent this past week working like crazy to get a demo ready for GDC, and it's finally done. Here are some new gifs and screenshots from the latest build...

After a rather unproductive week and lots of trial and error coding, I am finally getting somewhere with the water mechanics in Relativity. Here's a breakdown...

Hey there sir!!! Currently watching your Twitch stream and decided to find your project on IndieDB... Really enjoy watching passionate devs go about their business... Keep up the awesome work dude!

Hey, the project is not dead. Like RandomHobo587 said, I post mostly on twitter (@willychyr) these days. It just takes so long to format posts here on IndieDB, and I've been incredibly busy, so I've let this slide a bit.

No it isn't. He's been posting pictures and details to his Twitter @willychyr. That's where you can find more info.

Thank you! No plotline yet. At the moment, I'm just focused on the mechanics and getting the pacing and order of the puzzles right. Once this part is done, I'm planning to spend at least a year polishing up the game. During this time, I will begin to really think about narrative. If it works, it will be in the game. If it doesn't, it won't be.

Thanks so much! Got several new things in the works that I'm really excited about. Hoping to share it here in the coming weeks.

I'm curious to know if there's a story line, or a theme of some kind, not that there has to be one. just curious.

I haven't decided on whether to have a story line or not. For the first iteration of the game, I made the mistake of working on the story too early, and the mechanics and puzzles ended up being not very good. This time around, I've chosen to focus on mechanics and puzzles first and foremost. There's still a lot of work to be done with this first, but once that's finished, I will begin to think about narrative.