Greetings MechWarriors, and welcome to another Development Update. Previously we discussed the challenges of building a new game from the ground up in a cutting edge engine. This update will cover our progress throughout the end of 2021 and first quarter of 2022.

With a rough foundation established, we continued the process of fleshing out core game systems. Our artists worked in parallel on several different player vehicle assets, bringing our total to ten, albeit in varying states of completion. Perhaps most exciting, the level design team began working on our first original map: TC_IceFall, inspired by a real volcanic island in Iceland.

By January of 2022 we had made significant progress in implementing missing features. The player perspective was moved to the intended first-person position, and we added HUD elements such as the weapons readout and overhead map. We put in a placeholder cockpit, implemented sound systems related to movement, created heat and damage effects, and so on. However, our progress overall failed to reach a satisfactory "game-ready" level of quality which we would feel proud to share with the public. We recognized a need to focus our efforts on one feature at a time in order to achieve the desired results.

With most existing features either left at a low quality level for the immediate future or under heavy development, we decided against publishing an update covering Q4 2021 alone. Additionally, the holiday season and early Winter were a particularly difficult time, when several new technical and organizational challenges arose.

Firstly, with work ongoing in several areas at once, interdependencies between Blueprint systems led to some wasted time and redundant work until we adjusted our version control practices to avoid conflicts. Unreal Engine Blueprints are node-based scripts - easy to work with and very useful for prototyping game systems, but not designed for effective collaboration. Conflicts in code can be identified and sometimes even solved with automated tools. However, conflicts between two versions of a Blueprint must be resolved by hand, which can be quite an arduous task.

Secondly, our work on refining vehicle movement involved fixing a bug in the early access version of Unreal Engine 5. With the game engine nearing its full release, we held off on internally distributing the fixed early access build, lest we repeat the process a short while later. This also prevented us from merging individual developers' work together and compiling new test builds for several weeks. The resulting lack of internal playtests was an additional barrier to creating promo materials and showing off our progress. We have now fully migrated to the new version of UE5, allowing our normal development pipeline to resume.

Lastly, the studio has suffered from attrition since the previous Development Update. Being a volunteer group affords us an incredible degree of freedom rarely found in the games industry, but leaves us equally vulnerable to key personnel being swept away by changes in their work schedules and personal lives.

Now that we've articulated the challenges we faced over the last six months, on to the progress report!

Our art team reorganized its efforts for increased collaboration to stave off individual burnout, building a universal vehicle cockpit as the first test of this new strategy. Each artist created a handful of pieces and props designed for modularity and reuse, while our lead artist worked on the cockpit model itself and put all the pieces together. Using this method we were able to raise the quality of our artwork without creating more stress for any individual artist. We're now repeating the process for the Atlas cockpit, and the Bushwacker model is also receiving a quality pass. 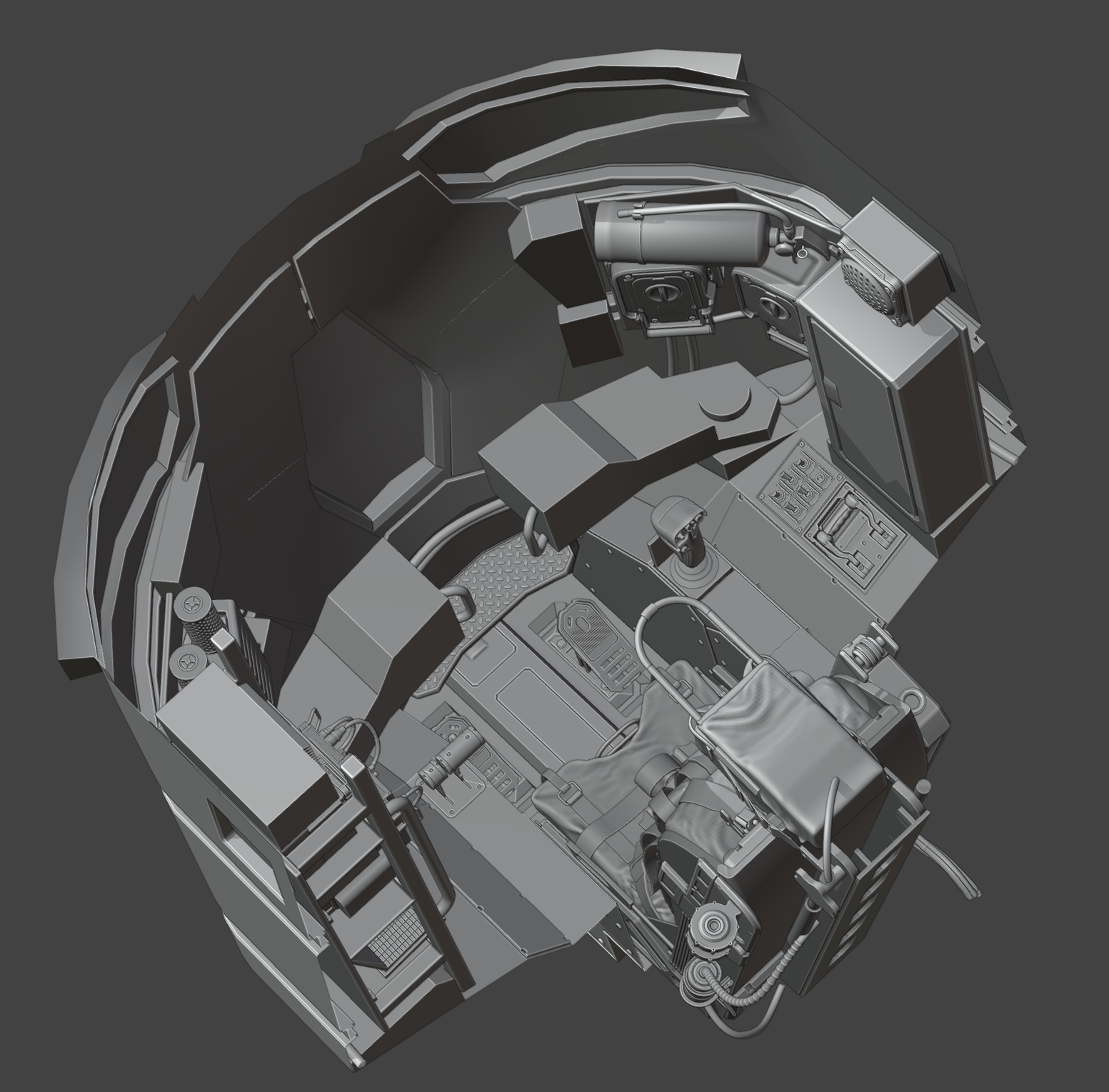 WIP Atlas Cockpit - the panels around the 'nose' are screens, creating an unobstructed view

The code team has suffered the most from attrition, but progress has been significant in the specific areas we targeted. Setting aside the long list of secondary game systems which have been prototyped in Blueprints, our code team has been focused on refining movement characteristics for each unit type. Aerospace movement was first up, followed by tracked vehicles, and now hovercraft. We need to create a solid foundation for movement and shooting, which make up the core gameplay elements, before moving on to polish other major systems.

The map team has been busy! Work began on TC_IceFall, our first original map, late last year. We spent several weeks tweaking the heightmap and theorizing about the positions of objectives and points of interest (POIs) before settling on a tentative layout. We went through several iterations in early playtesting, but we quickly realized that there were serious limitations on what conclusions could be drawn, as the game itself isn't developed enough to test with intended gameplay. Furthermore, there was some discomfort at the idea of iteration playtesting for unfinished game mechanics taking place on an unfinished map with an unproven layout.

Recognizing this problem, we made a new plan to create separate testbeds for iterating on gameplay and map design. TC_IceFall now serves this role for developing our mapping techniques, however we still want it to end up a playable and fun map. We decided to just port the heightmap to CryEngine 2 for playtesting in the original MWLL. Only an hour of setup was required to make it a functional Terrain Control map with some placeholder buildings marking the intended POIs. This allowed us to identify and correct several issues with the layout, which would surely carry over to LL2 when the gameplay is more developed. 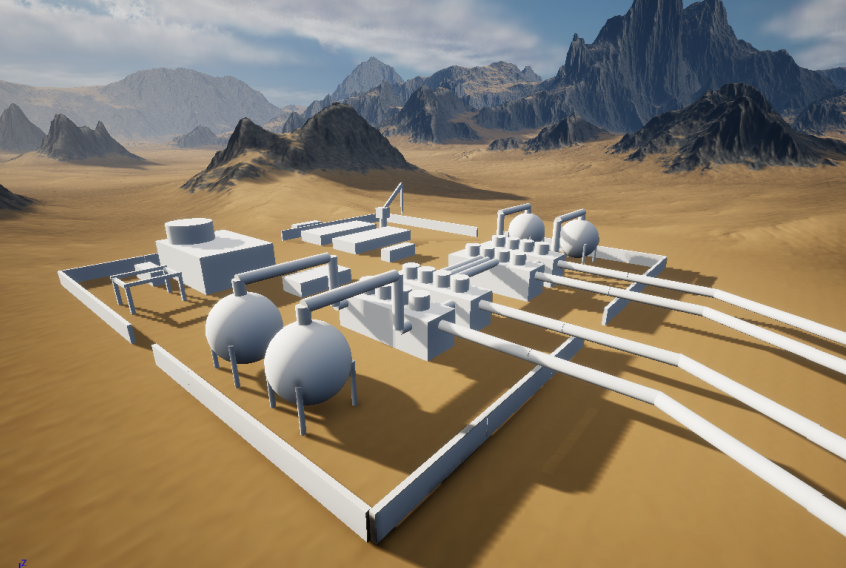 Initial blockout of TC_DeathValley middle base

With development on the new map unblocked after some productive playtest sessions, we still wanted a proven environment for our future needs as core game mechanics are developed. To that end, we imported the heightmaps from two of the most frequently played and well-liked MWLL maps: Mirage and DeathValley. Only the most basic setup was required to make them suitable for playtesting, similar to the process we used for testing IceFall but in reverse. We plan to include updated versions of these classics in a future public release, but they will remain relatively barren for the immediate future.

That wraps up today's Development Update. Overall the project is still quite rough, but approaching a more representative and polished state in specific areas. At the current pace of development, we hope to expand playtesting beyond the current "friends and family" invite-only system towards the end of the year. Be sure to join us on our Community Discord to keep up with the project in between major Dev Updates. And above all, stay legendary, MechWarriors!

Our second Development Update, covering the progress we've made over the summer months.

That is the same island map from Mission 4 (The plot erupts) of Command & Conquer: Renegade.

Didnt know it was actually a real place.. makes sense.