An Incredible Storyline – Delve into a sprawling storyline spanning nearly one thousand years and experience the world of Terra through over an hour of flashback cutscenes. Uncover the destruction of the once grand Elven culture and the rise of Human civilization. Follow the path of a modest main character and companions on their ascent to glory.

Complex Role Playing – Experience a highly non-linear RPG where the decisions you make change the world around you. Will you gather and trade the Ancient Elven Relics for a Dorian ship, or trek through the uncharted depths of the Woods of Despair? By virtue of the choices available in Last Dream, there are over five hundred unique paths in your journey through the mystical land of Terra.

Tremendous Replayability – Last Dream allows the freedom to choose any 4 character party you wish from 8 distinctive character classes. With over 4,000 party variations, you’ll never run out of new experiences. In addition to myriad party combinations and various selectable difficulty levels, you can also build each character as you see fit, so the possibilities are nearly endless.

Side Quests Galore – Whether you love the rush of gambling at Lucky’s Casino, the sensation of adrenaline pumping through your gauntlet-covered veins as you stare down your opponents at Cecil’s Arena, or even the feeling of frantically racing your Giant flightless bird to win first place, Last Dream has it all. You’ll find much more waiting for you to explore in the world of Terra…

To better communicate our team's game development progress to the fans of Last Dream, we created the graphs below. We will regularly update this chart until the Expansion and Last Dream II are released! 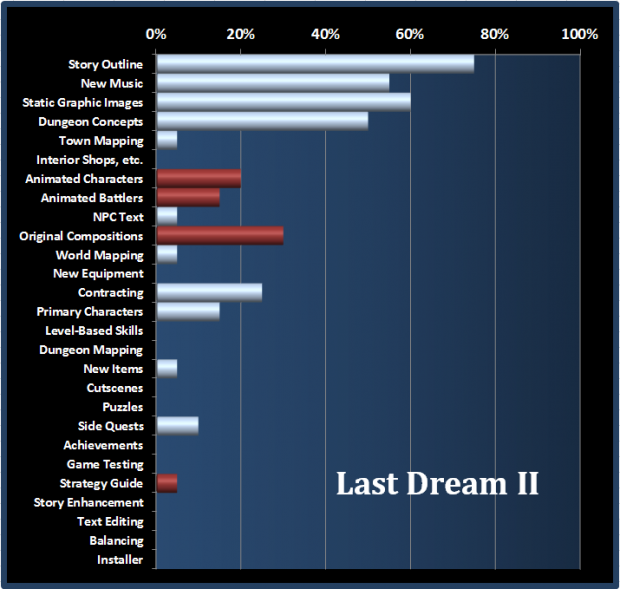 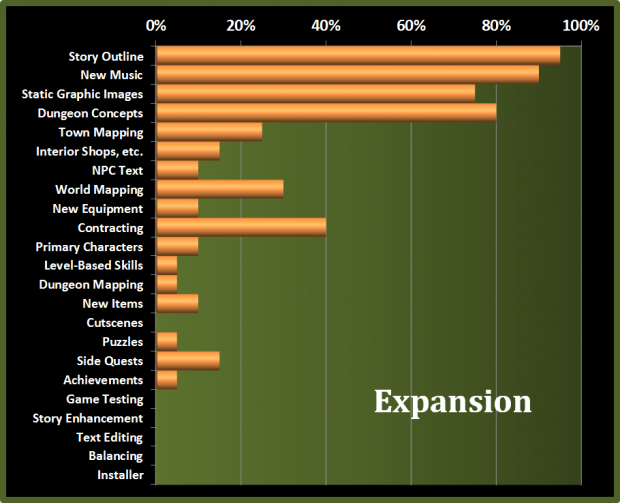 We are also thrilled to report that we reached a stunning landmark recently: we have now sold over 500 games!

We never expected this response from the gaming community when we began making Last Dream, an RPG merely intended for our own amusement.

Thanks for your generous support and interest in the Last Dream series.

The first version update to Last Dream is now available on WhiteGiantRPG.com

Last Dream is now available for sale on WhiteGiantRPG.com

The Last Dream release date has been moved up one week from August 6th to July 31st. We will incorporate the final Kickstarter rewards and game test all...

We regard the funds that Kickstarter backers have granted our small team as a generous extension of trust, and we will work diligently to fulfill every...

Full version of Last Dream. It includes a 3 hour trial version with complete freedom to explore the entire world. Buy a license key from www.whitegiantrpg.com/download...

Last Dream incorporates the best features of classic RPGs: replayability and complete immersion into a vast world, rich with detail. Follow the rise of...

Have an odd issue when trying this game, at the character select screen, the white box keeps moving up and down, the only thing I can do is make it move to the right.

Numerous people from the gaming community have complained about the graphics, and we have heard you. In response, we are dedicating a significant portion of our Kickstarter funds to original pixel art from talented graphic artists, for Last Dream II. We hope you will give our sequel a look when it is completed. You can view our progress here: Whitegiantrpg.com

Don't worry so much, that guy trolls lots of games on here.

Game looks good. It also looks like a blatent ripoff of Final Fantasy. Overworld looks similar, job classes are similar, dashing in dungeons but not on the overworld, airships, and there's even chocobos in this game!

Just have to say this. Isn't it possible that most of those similaritys exist because Final Fantasy made them standard features almost? Similar does not mean its a rip off and I hate when people say "Omg it looks like this its a rip off!" FF didnt make the Knight, Hunter, Thief, Monk, or Engineer those all already existed in the real world at some point so the jobs arent a valid arguement without saying that FF ripped off Europe and human race.

This game was clearly INSPIRED by FF and other games in its genre. The only points I'm letting go on is the Chocobo and MAYBE the airship.

This maybe a great game but the price is wayyy off the mark. I'm all about supporting dev's but when there are no sales of this game you can keep this post in mind cause myself like many others support their wallets first, dev's second... If i had to price this game fairly i would give it between 5 - 10$ and that's because i have not played it.... but anymore then that and you will be losing sales big time then when the interest is over and you guys try to sell more by having a sale let's say 50% off... to pay or risk that much for a game that i'm not even interested in cause the time has passed, you will lose more sales.... Remember this post .....

We appreciate you taking time to provide feedback. That said, please try out our free demo: www.whitegiantrpg.com/download.. If you still don't think it merits $15, please let us know at: info@whitegiantrpg.com. We welcome all comments, good and bad.

Can you please make it available in Android platform!!!?

Can you please release in Android!!!? I would pay for it for sure!