The AI
The AI used for the game is one I wrote myself, modeled after
animal behavior. It is capable of gathering sources, mitigating
danger, and controls all of the moving creatures in the game. To put
it simply, the AI is the brain of every creature in LAIR.
Due to the fact that it's based on animal behavior, the AI
responds to user decisions in a broad, unpredictable range of ways,
allowing you to constantly replay the game, but ensuring you will
never play the same game twice.

The Map Generator is one of the few
components of the game that isn't controlled by the AI. The maps are
generated independently based on what the user's character (also
referred to as the “main character”) is doing at the time the
game is started. Every time the main character enters a new place,
the generator configures a fresh map based on the actions of the main
character.

The game also allows for the main
character to save and edit played-through maps, allowing the user to
enter those worlds at any time. Because all of the maps are randomly
generated, LAIR builds a community of players who can access each
other's saved worlds, creating an MMO environment.

The Entity Generator is the basic
character list. After a map is generated, the AI checks over the map
and decides what creatures to place in the setting based on character
skill levels and the style of the map. The function allows the AI to
determine what creatures are suitable for the landscape after the map
is created, insuring the creatures you encounter in a dungeon will be
entirely different from the creatures you encounter in a lab or a
forest. In addition to accessing the list and picking characters,
the AI also controls all of the behaviors of the entities.

The Entity Generator also creates more
than just live NPCs. It also controls the components within the map,
which allows you to change your environment. Thanks to the AI, the
physics of a fictional world have been designed and in conjunction
with the Map generator, which designs the environment of the world,
the main character really has the opportunity to do anything he or
she chooses.
For example, in LAIR your character walks into a dungeon. Your
character chooses to break down one the walls, rather than going
through an exit. The wall you break down leaves behind rocks, which
can be used to build a wall somewhere else, create a barricade/trap,
or anything else your character can think of.

Thanks for voting and helping LAIR - Social dungeon Crawling on it's quest to become the 2022 Indie of the Year. You are now in with a chance to score some free games. Help this game secure more votes by embedding the widget (or link) we have included below on your favorite sites.

To promote LAIR - Social dungeon Crawling and grow its popularity (top games), use the embed code provided on your homepage, blog, forums and elsewhere you desire. Or try our widget.

After the downfall of Aziraal, God of Fire, the Dark Lord Gandohar has nearly achieved his objective to disrupt the balance between the elements. Dark... 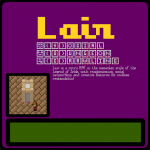