Knights and Merchants: The Shattered Kingdom

After many battles, a former kingdom has been divided into many small principalities and earldoms. The kingís troops were pushed back into one last royal province, and the rulers of the other provinces waged terrible, destructive wars against one another. The whole land fell into a state of chaos and now the former royal capital itself is under siege by the armies of the rebel lords. You belong to the last remaining group of loyal kingís men, and have been commanded to go to the king in view of the imminent attack.

Map2Bitmap will convert a map file into a bitmap. The idea originally came from Thunderwolf's town builder. The archive already contains all versions...

With this tool you can edit Knights and Merchants fonts.

The demonstration version of Knights and Merchants, the version 1.20.

The de facto most feasible scenario and terrain editor for K&M, made by Krom.

going to get it now :D

Man, I loved this game, but it is indeed time-consuming. Never beated the singleplayer campaign :D Hungry troops are the worst.

Heh, nice game but quite hard.

Maybe not hard, but extremely time-consuming. One game/match can take even up to a few hours at best (3-5? :-P).

Take command of your army as you storm through medieval Europe in an extensive series of campaigns. Choosing one of the four available nations – Viking...

Tzar: The Burden of the Crown

A sinister evil has come to the peaceful kingdom of Keanor, a land of beauty, mystery and magic. The Palace lies in ruins as armies of malevolent warriors...

Return of the legendary Cossacks! A large-scale historical strategy on great battles of the XVII-XVIII centuries. Modern remake of the best 2001 strategy...

This game tells the story of Bjarni, a stout Viking: As a young boy, he accompanied his kin on a journey to search for the mysterious Sunstones. The search...

After fighting a losing battle with drought and the mysterious disappearance of their women, a brave people set out to sea. The survivors need your help... 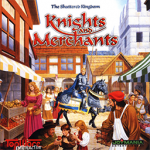 Tags
Embed Buttons
Link to Knights and Merchants: The Shattered Kingdom by selecting a button and using the embed code provided more...