In a universe driven by targets, a faceless corporation employs you to create an evolving ecosystem you can never hope to control...

Intelligent Design: An Evolutionary Sandbox is a god game with fully simulated genetics and evolution. Create species of plants, herbivores and carnivores and try to control the ever evolving ecosystem. Design and create genetically modified organisms, but remember when you start tampering with genetics it is hard to undo your mistakes...

The behaviour and appearance of each organism are determined by their genetics. How tall will a plant grow? How fast can an herbivore run? How often does a carnivore seek prey? These genetics are passed down generation after generation, with random mutations caused by radiation. Evolution is fully simulated, there are no tricks or statistical approximations. You are watching life evolve on your computer.

Temperature, humidity and wind are all modelled in the game. The weather and climate effect your organisms and perhaps your actions affect the climate as well…

One of your key objectives is to investigate the organisms you create. Build collectors to harvest resources and research stations to observe the organisms. Eventually you will unlock the secrets of genetic engineering. Create your own genetically modified organisms, but be careful, once a genome has entered your ecosystem it may be hard to undo the damage…

Science to be Done

What do all those genes actually do? How is the world score calculated? What does world efficiency even mean? Much like a real scientist you will need to investigate, analyse and work with other players to try and answer these questions. To help you along the way the game outputs data in xml files so you can really get your science on.

Who is employing you to create this ecosystem? Why are they doing it? Why are you doing it? What are those targets for? The answers to these any many other questions are out there, you just need to work together and find them...

Intelligent Design: An Evolutionary Sandbox has been genetically modified!

Thanks to everyone who helped us test this update (the biggest we’ve done) over the past few months. It’s full of new content and improvements. Give it a try, let us know what you think, and please tell your friends!

We’ve made a new map for you to play on. It’s inspired by arctic landscapes, and so features big flat plateaus with deep crevasses snaking around them. Will micro-ecosystems emerge in these dark depths? Will plants evolve to find their way up these sheer cliffs? We’re so excited about this new map, we’ve made it the first map new players will see. 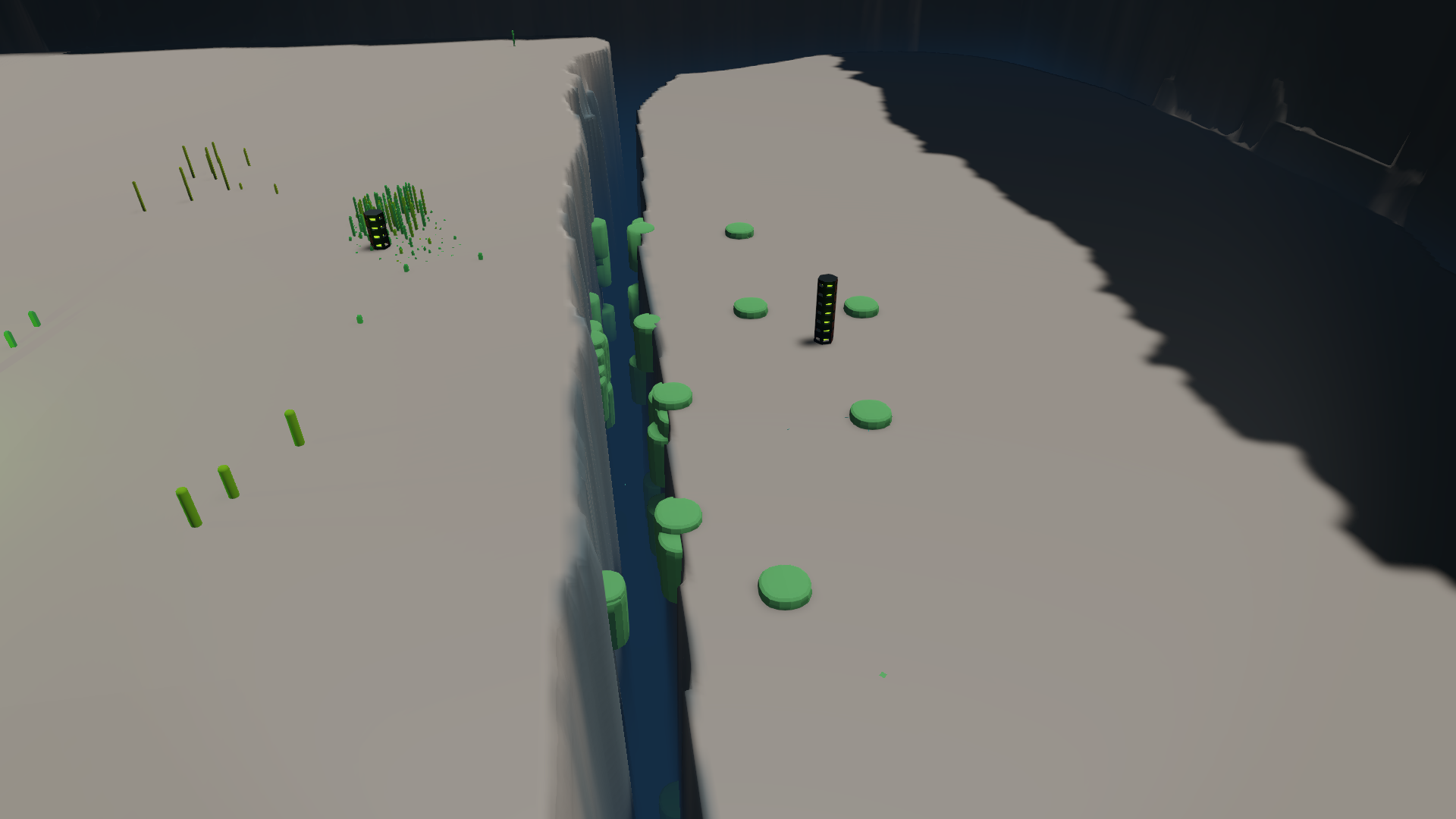 The controls have been completely changed. We read your reviews and we watched countless YouTube videos, and the hard decision was made to drop controller support (though you can still access the original version of ID via the Classic branch). Now the game controls something like Factorio or Two Point Hospital. Move the camera with WASD and holding down the middle mouse button. Then simply use the cursor to click where you want to build buildings or create creatures. 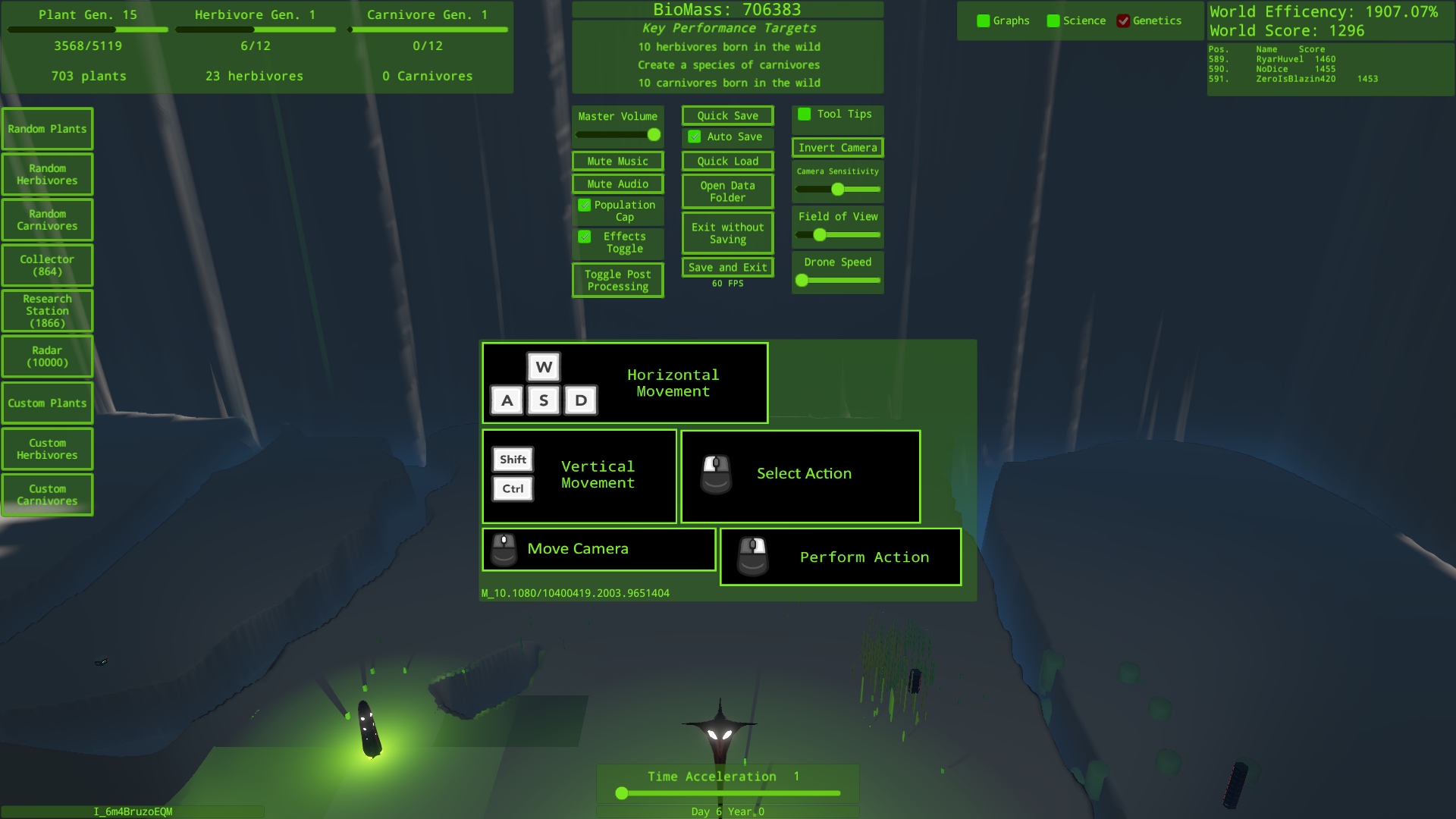 We have also completely changed the genetics panel. Now you can see every gene you’ve unlocked for an organism on one screen, and then edit them all at once using a slider-based system.This new UI also allows for quick and comprehensive inspection of existing organisms in your world. We hope this gives you a better sense of what is going on. 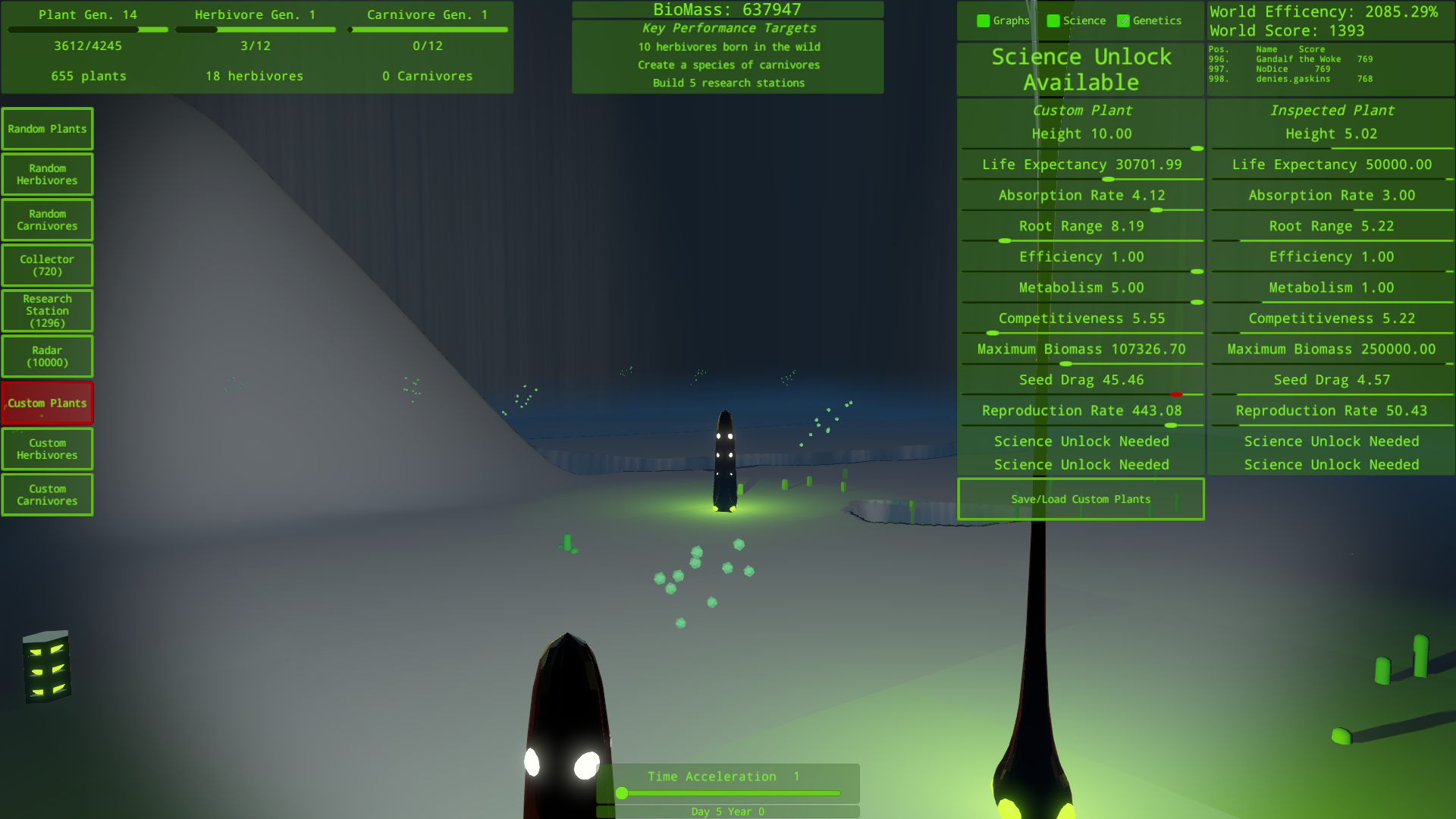 It took a lot of work but we’ve managed to significantly improve performance in the game. This is mainly due to the experience gained developing Cycle 28 for Nintendo Switch™, but also due to updates in Unity3D. Population numbers can now get much higher at a playable framerate. The population cap is still something you can disable, so those of you who want to push your thinking machine supercomputers to breaking point - or just want to heat your room as we head into winter - can. 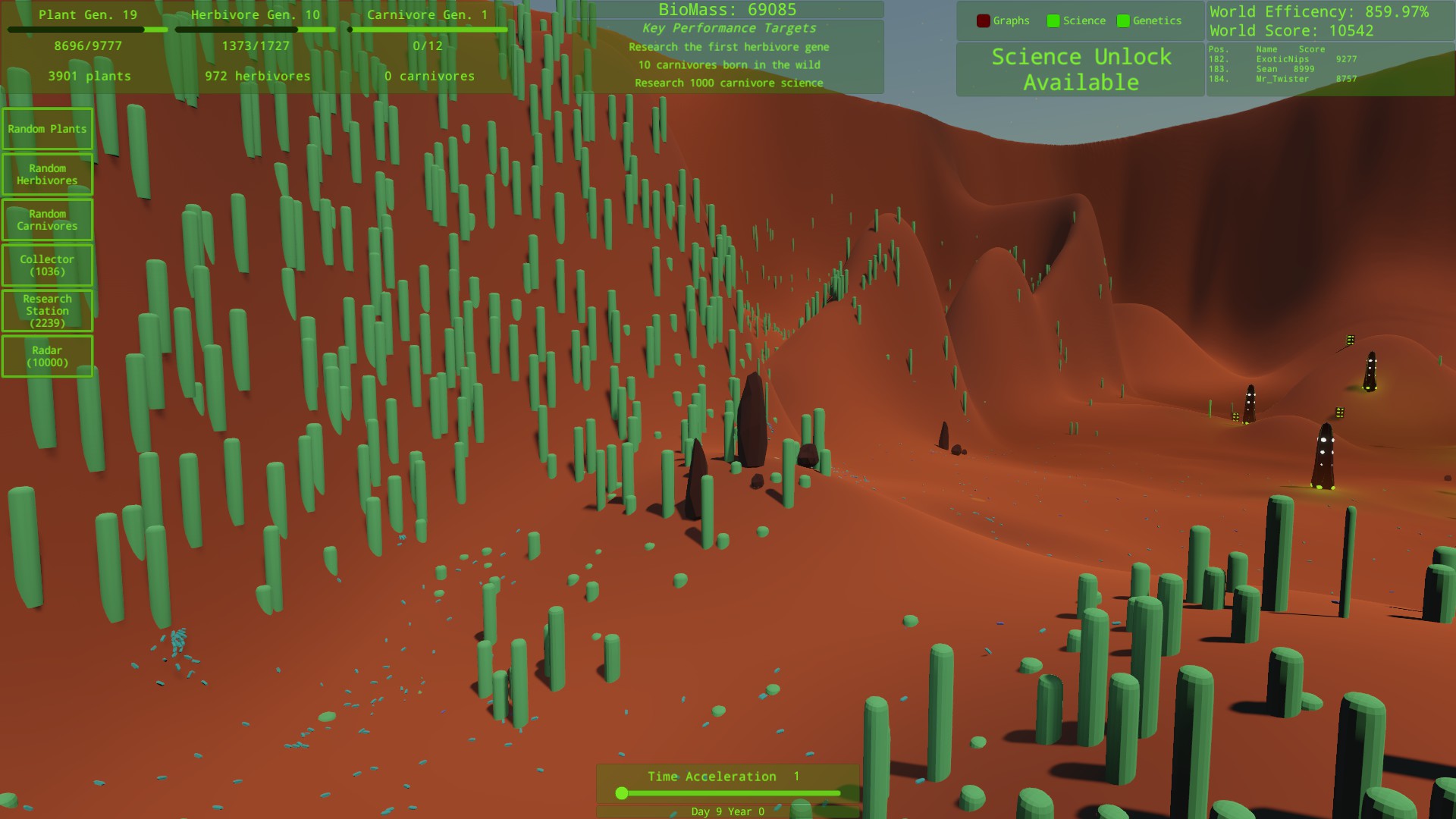 The performance improvements have meant we have been able to add time acceleration unlocked right at the start. This is a feature that was previously unlocked by completing all Performance Targets in the game, but due to feedback from the community we have decided to provide players with this feature from the beginning. Use it wisely!

To celebrate the holidays we are running a guide competition for Intelligent Design: An Evolutionary Sandbox where you can win a copy of our next game...

Excited to announce the evolutionary god game will be releasing 12th May 2017 on Steam. I'm also revealing all the achievements and price along with a...

As the game approaches a release on Steam it is time to start designing achievements. I would love to get some suggestions from the community of achievements...

Intelligent Design: An Evolutionary Sandbox has been successfully greenlit. It is a god game with fully simulated genetics and evolution. In this news...

I see that this game has been Greenlit on Steam. Will Itch game owners receive Steam key once it comes to Steam's store? :)

Yeah... if you own the premium version. I need to sort out some legal stuff and implement some new stuff before it releases on steam. Something I don't want to rush!

I love the sim and am seriously enjoying it. But, I have one issue. After a certain amount of time in game(even if saved and then reloaded) the camera becomes confused somehow. It's as if it wrongly calculates the axis it is supposed to be on. R-click and drag to the right all of a sudden makes the cam move diagonally(or another misdirection) and it confuses the entire camera controls. I press 'W' and I start going up and forward and a 90 degree angle, or something else weird. - It think you could fix it easily(if at least temporally) by putting a 'reset camera' function, but I'm no programmer. --- Thanks for your all your hard work, I am definitely looking forward to more from this project. :)

Thanks for letting me know, I'll look into it. If you have a controller it may be more stable than the keyboard+mouse

I love the sim and am seriously enjoying it. But, I have one issue. After a certain amount of time in game(even if saved and then reloaded) the camera becomes confused somehow. It's as if it wrongly calculates the axis it is supposed to be on. R-click and drag to the right all of a sudden makes the cam move diagonally(or another misdirection) and it confuses the entire camera controls. I press 'W' and I start going up and forward and a 90 degree angle, or something else weird. - It think you could fix it easily(if at least temporally) by putting a 'reset camera' function, but I'm no programmer. --- Thanks for your all your hard work, I am definitely looking forward to more from this project. :)

Very cool idea and execution. Only thing I'd ask is to label the genes on the Inspector screen as you research them, as to make things straightforward.
Good luck with the development :)

I have thought about that yes, I may add it in a later update.

Hi there!
I'm very interested in topic of evolution by natural selection, origins of life and similar. This game looks very interesting to me, and seems like fun. I appreciate "cute" design of creatures and such. Tracking.

Thanks, I'm glad you like the look, I almost didn't make the game because I didn't think I could make 3D look good.

Hey, it doesn't need to look "good" if the gameplay is fun. Look at games like "Thomas was alone". Minimalistic design is in demand nowadays ;)