Harkanoid - An Arkanoid Clone Made Difficult! Your goal is to survive the suffering of each level. Game was designed to be challenging for the player. It tests your patience and skill. Who thought Arkanoid alike games can be so difficult.

Release Date: 2017/02/26 From Release Date there will be a competition! Whoever gets first place will get to create a whole new level in the game!

Hey guys! I want to present you my first "serious" game that I worked on and devoted time to finish (still Demo release. Full game will be released on 2017/02/25)! Harkanoid. I decided to make this game while following Unity course on Udemy by Ben Tristem and Sam Pattuzzi. There was one specific section about how to make a Block Breaker game. Course teached me basics how to move the paddle, physics, vectors, better Menu, Singletons and few more important things and I had a basic skeleton for the game that I am about to release. However I didn't start putting content to the skeleton. I made myself a Game Design Document so I don't get lost when my project gets bigger. There I wrote basically development phases for myself so I know when to do what. After that I rewrote everything I learned from the tutorial without looking to it as I believe that is the best way to absorb information from tutorials after you finish them.

Why am I releasing my first game?

Now that you know why I decided to make the game, you might want to know why I want to release it and take it so seriously? Well in my opinion, the earlier I start to market my games, the easier it will be for me in the future, however because of this I am ruining my "portfolio" as I will have lots of games that show little to no quality, but hopefully with the time I will be able to improve my quality!

I love tracking stuff. It doesn't matter if it is my productivty, numbers, statistics or anything else. So I decided to record a timelapse of me learning Unity while creating the game at the same time. I post it to my YouTube channel almost every day. Sadly I forgot to make my progress .gifs, I managed to scramble few when I sent them to my friends but that's all. Next time I will make more .GIFs to be more transparent when showing updates.

I rewrote everything I have learned + added my sounds to the game using Bfxr.net tool.

Added some content features to the games. Like particles, items (only one for 1, but now I can add more if I want with ease)menu and a theme song. Updated Ball physics and made them bounce similar to Arkanoid. Created Score/Lives system + Simple UI interface but most importantly learned more about Singletons, re-referencing and debugging UI! I had many issues when implementing these features, so I had to slowly, but surely find problems and learn how to fix them which was a hassle at first.

February 17 Morning ~11 AM - Polishing the game

Basically I was messing around with the code and tried to implement whatever I can (it wasn't forcefully though, I still wanted to create something that looks attractive for the game) so I made three new types of bricks. Movable, blinking and random brick that has his color generated. Best part is that I can combine these factors together and make a special brick if I want without any problems

I am a fan of Vaporwave music so I included backgrounds of Vaporwave pictures and pixelated them. This mix of styles is interesting, but I am not sure if it is conflicting or not as I am not the best artist nor designer, maybe you guys could provide feedback about it! Anyways I finished most of the core game, level designs, UI, score, sounds, themes, backgrounds, now what was only left for me is to bug fix everything and implement UI 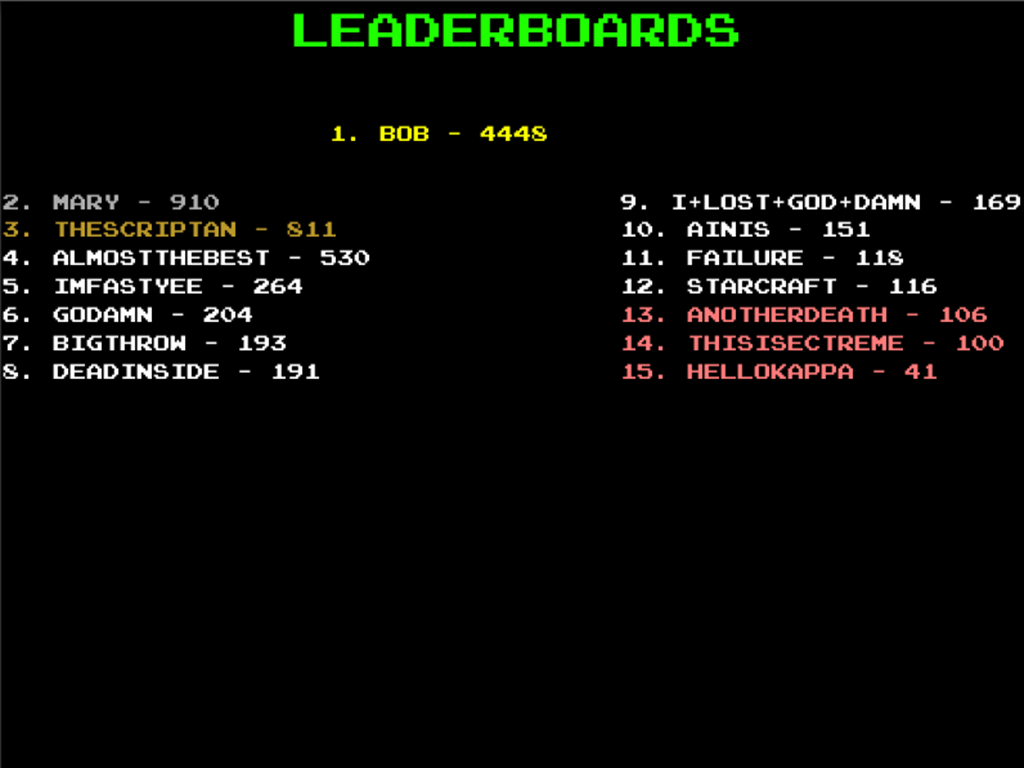 P.S There is a blinking "Press Space To Return" but I forgot to capture it :P

I managed to fix most of the bugs and implement global leaderboard. I achieved that by using Dreamlo a great tool for small game global leaderboard. It is free and doesn't require much skill to implement it to your game, however it is insecure, so you might need to invest few dollars to set a better security. 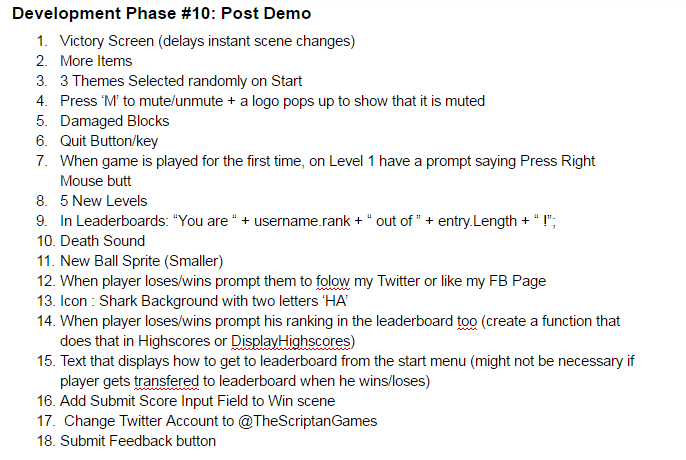 Right now I will focus on two things. Marketing and finishing my long TODO List. I hope I will be able to keep up with everything since I have a pretty stressful week coming up. It will be a great test of my productivty. As you noticed my TODO list contains some things that are easy to implement and I can't disagree, but keeping track of it I believe is still efficient and effective.

I am proud that I am writing this article and actually releasing a game with proper treatment. I've never done that before and I am extremely stoked to do this for the first time. Loving every moment I spend working on game game. Inside and outside. Hopefully if I maintain my productivity levels stable I'll achieve great results within months or years.

Before you go I'd like to go full sellout for a moment here :P

I recently created a new Twitter too to divide it from my personal account. You can follow it here. I'll be posting my progress within week there and sharing screenshots ideas!

And most importantly download links! I compiled my game for 3 platforms. Windows, Mac and Linux so guys if you have any bugs on Mac or Linux please report them!

Fixed minor bugs that caused some trouble playing the game.

First Harkanoid Release for Mac Platform Feel Free to provide any feedback you have!

First Demo of Harkanoid for Linux platform. Feel free to provide any feedback if you have.

First release of Harkanoid for Windows platform. Feel free to provide any feedback you want!