Gunbox is a multiplayer survival co-op shooter platformer inspired by Super Crate Box by Vlambeer. You have to survive as long as possible and collect boxes, every box you collect gives you a new weapon that replaces the old weapon. Every six boxes a timed special box appears, if you get this everyone is revived and all enemies are killed. If enemies reach the bottom of the map, they reappear at the top and move twice the speed, so be sure to kill them. Sometimes enemies can drop coins which can be used to purchase a turret for additional defense. Work together with your friends and strategize to last as long as possible.

Since there isn't a mass following for my game I'll start by telling you a bit about it. Gunbox is a (game needing to be renamed) online multiplayer arena coop platformer shooter. Your goal is to survive a mass onslaught of enemies in a place called The Outland. The Outland really has nothing going for it except for Gunbox which is a television show broadcasted to everyone in the world (or universe or something). 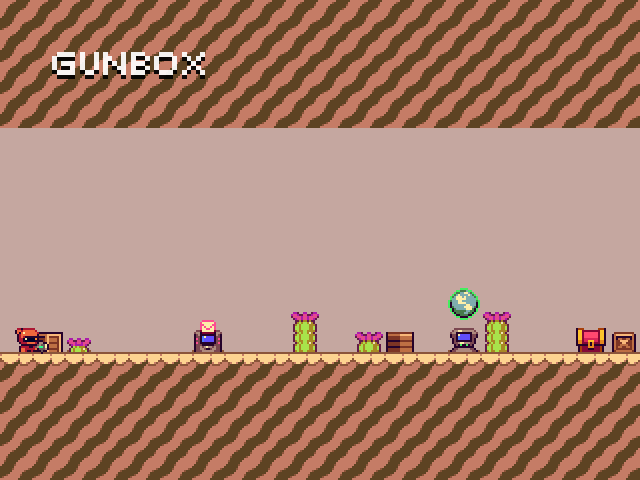 The contestants goal is to collect money from their fallen foes to use to upgrade themselves as much as possible so they can survive longer. They can grab weapons at the wonderful gun box.

The core of the game is already totally working, you can play with friends and survive, there's quite a few guns, and two enemies for you to play with as well. Here's a video of what multiplayer is like:

The current course of action includes adding content and finalizing graphics. Once I feel the game is ready enough, I'll purchase a server so it can be played 24/7 without having to host yourself. If you're curious how the game is right now, head on over to Poega.me and browse to the Gunbox forum. Do keep in mind that the game is a bit outdated, and with every patch the game improves.

Very Awesome Man! Keep to add new maps and bigger ones and stuff like that to make the game more interesting!

More maps will definitely happen, there's a sort of adventure mode idea that I'm also working with that will have very large stages.

You will also be able to very easily make your own maps using Tiled2D :)