Greedy Bankers is a fast and infuriatingly addictive puzzle game by Alistair Aitcheson, for iPhone, iPad and PC. Slide the gems into squares to make them bigger. Bigger gems get you more cash! Can you make the monthly target before the time runs out?

Thanks for voting and helping Greedy Bankers on it's quest to become the 2022 Indie of the Year. You are now in with a chance to score some free games. Help this game secure more votes by embedding the widget (or link) we have included below on your favorite sites.

This weekend I took part in the Ludum Dare 48-hour competition. The competition takes place three times a year, and tasks developers with the challenge of building a game, from scratch, on their own, in 48 hours. This year over 700 people entered, all developing games based on the selected theme: "Alone"

I took part, and made a game which is part match-em-up, and part strategy/RPG, which I called Omega Men. I also made a video diary of my experience, showing how the ideas and game evolved during the time period.


The game itself is playable here: Play OMEGA MEN Feel free to leave your feedback here on the blog or on my Ludum Dare competition page! 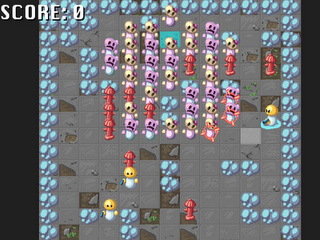 I really enjoyed doing this, and it was a great way to try out some new ideas. This is something I plan to do a lot more of in the new year - it's a good way to generate fresh material after a year spent mostly on Greedy Bankers!

We interrupt your browsing for an important Newsflash (or trailer)! The Greedy Bankers are back, and this time they've brought multiplayer. Watch the...

Greedy Bankers Out Now for iPhone!

Now available in App Store, launching with 33%-Off Sale! If you can't beat them... join them!

Greedy Bankers has been approved by Apple and is on its way to your iPhone/iPod Touch this Thursday!

The current version of the Windows Greedy Bankers prototype. While I'm developing the iOS version the Windows version is a testbed for new ideas and feedback...

The most recent version of the game comes with a special Halloween slant to add to the fun. Give it a go and let me know what you think! To install, simply...