Generantis is a 2d sidescrolling ARPG that features procedurally generated loot that you use to create new gameplay. Players, mobs, projectiles, armor, weapons, even quests, maps, and more are all lootable objects with random stats and randomly picked script components. Put objects you like best in the generator storage to create a new planet branching off the previous, and model lore after your planets to create an adventure file that can be shared over the internet.

Generantis is Making a Big Comeback

Hi, I'm Ian, also known as my online alias ChromeWing, and I developed the idea for Generantis about a year ago. It was an interesting idea I came up with when thinking about procedural content in games and how things can be taken even further than simply finding randomly generated monsters, weapons, and items.

In case you don't know, Generantis is an extremely procedurally generated game with a focus on building new planets with the items you find. Everything about the game, from weapons to quests, are items you can loot from monsters. By putting these items in the storage space known as the generantor, new levels are generated using these items. So for instance, I could find a map with special components on them that spawn dungeons, and place them in the generator in order to create a new planet that branches off from the one you played on, with dungeons.

Anyways, I'm here to announce that over the past few months, I've made a team with two other developers, a programmer/artist, and a developer/marketer. We like to call ourselves Procedural Remembrance, or Team Prem for short.

We are hoping to improve the overall appearance as well as appeal of the game this summer. Our artist already made a great sprite pack for the game.

By improving the art, it really helps our game appeal better to the general audience. In fact, it nearly embarrasses me when compared to my original art. More art can be found in our gallery.

As for the future of our game, Generantis will be taking a fair amount of building and restructuring, mostly on the coding side, in order to implement what I really wanted to pursue since the beginning of the hardcore development: scripting! 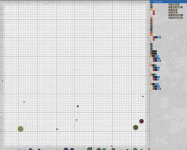 Me and our artist/programmer will be working on adding scripting support to the game. We call it RantiScript. It utilizes abstract coding to translate a script placed in a text file somewhere in the data folder into a usable component for the objects in Generantis. It will be fairly challenging to implement, but we agree we're capable of handling it and hope to get something working soon.

Generantis is still alive. We will provide more details eventually.

Generantis is now on Steam Concepts

The game is on the Greenlight concepts page, check it out for information and a new video!

The idea of this game

What exactly is Generantis all about? Find out here as I explain the process of allowing an adventure to create an adventure!

Future plans for the game!

Come see what's planned for Generantis in the near future!