Humanity has been hunted down and enslaved across the galaxy. The Vox war fleet has conquered countless human stations and colonies, strip mining their resources for use in their inter-dimensional empire. But secretly, in the shattered remnants of the human empire, a cloning facility has been growing new, biologically-enhanced human super soldiers to man a fleet of advanced warships. From the ashes of extinction, rise and take back what once was yours!

FLEET: Solar Empire is a real-time strategy and roleplaying space game in which your friends, via Twitch Chat commands, form the crew of your space fleet. Working together, your crew can repair your ships, capture enemy ships and stations, pilot fighter craft, mine resources, construct new vessels and even become colonial administrators. Your crew retain their levels and abilities with each session, allowing your fans to grow with your empire! As your fleet and empire expand, so too will the resources it requires to survive against the powerful Vox aliens. Mine resources to construct new ships, upgrade old ones and expand your infrastructure, then command your fleet remotely across the solar system and conquer enemy space stations for control of the galaxy.

This is just going to be a brief introduction so that we all know each other! My name is Mathew Tomberlin, I'm a indie game developer, computer science student and US Marine Corps veteran. I have been developing games independently for the last two years, but have loads of amateur experience from my youth. If you're interested in learning more about me, specifically, I'm quite active in the Game Dev Quest Discord server and you can always say hi or ask questions on my Twitter @CrimsonOctopus. If you're a fellow game developer, I highly recommend you drop by and say hi to the group!

FLEET: Solar Empire has been under development for about 6 months. I've been using Unreal Engine 4, almost exclusively in Blueprints, and Blender for the 3D animation. Development rate and progress has ebbed and flowed with the amount of school work I have, my current motivation based on life events and computer problems, but I am satisfied that the result is approaching a mostly playable state. I have had to make iterative passes through each of the core game mechanics, each time developing more and more of the mechanic and integrating it with each of the other new mechanics.

The game connects to an input Twitch IRC and reads incoming messages, parsing them for a command identifier, command and command parameters to determine "crew", who are Twitch viewer, commands for their characters. A major problem has been designing the UI to maximize the amount of information about each Twitch viewer's character, such as their health, level, stats, current room/ship/fighter. I have developed novel means of indicating targets, such as a curved progressbar-like line from one list element to another and tabbed, scrollbox-styled lists, in order to pack as much viewer information on screen as possible while inhibiting the player's view as little as possible.

Another interesting aspect of FLEET: Solar Empire is that each solar system the player visits is procedurally generated and saved for return trips. The planet's precipitation, atmospheric amounts and color, moon, ring and asteroid count are all determined procedurally and are used to define the amount of resources on or near each planet.

Lastly, I'll discuss persistence in the game, which has been another major sticking point. Because the solar system is procedurally generated (not using a seed value), the data for each system is saved to a save game file as a variety of structs. The same is true for crew and ship data, which is serialized when the game is turned off. The data is deserialized from the save game data and the entire world is reconstructed when the game begins. Much of this is complete, though by adding many new features since the last time I worked on persistence, much of it is broken as well. 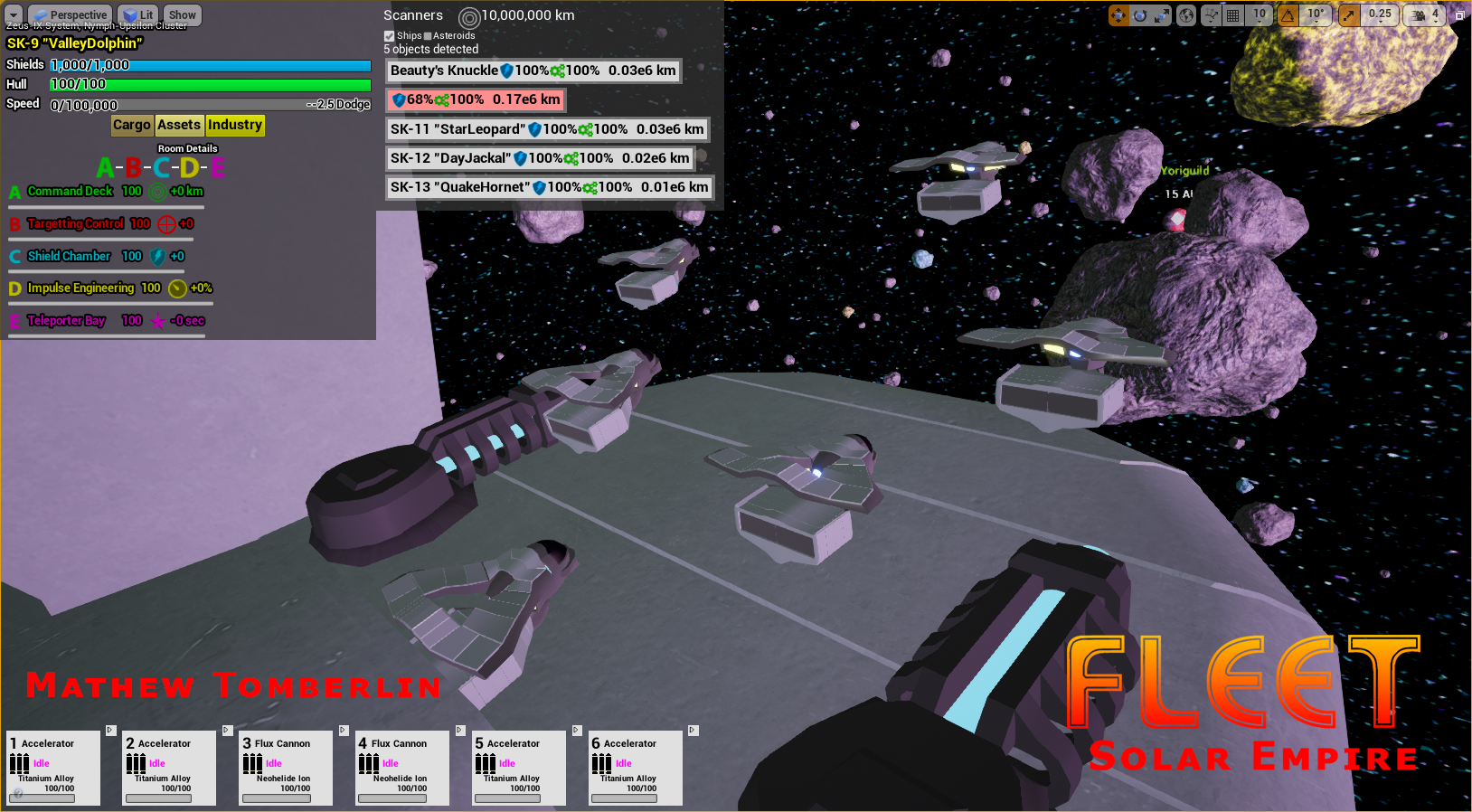