Final Fantasy Tactics is a tactical role-playing game developed and published by Square (now Square Enix) for the Sony PlayStation video game console. It was released in Japan in June 1997 and in the United States in January 1998. The game combines thematic elements of the Final Fantasy video game series with a game engine and battle system unlike those previously seen in the franchise. In contrast to other 32-bit era Final Fantasy titles, Final Fantasy Tactics uses a 3D, isometric, rotatable playing field, with bitmap sprite characters. 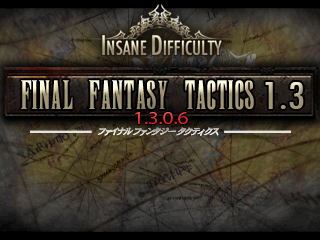 This update to Final Fantasy Tactics 1.3 adds Marche from FINAL FANTASY TACTICS ADVANCE to 1.3 and fixes some minor display bugs. It also rebalances some...

This update to Final Fantasy Tactics 1.3 brings caster job balance in the early, mid, and late game. Wizard has a brand new skillset, Lancer and Priest's...

It is a minor part of a bigger patch that unlocks novels for everyone thanks to Tuffy da Bubba translations and Xjamxx coding skills. Version 1.0

Small version of post patched FFT Rebirth with necessary components to play mod. If you have your own emulator, use the IMG ZIP version, and if you want...

Requested upload of IMG version (post patched) version of mod, should load into emulators on different systems without much issue.

Welcome to Ivalice! This isn’t the same Ivalice you may have remembered from Vanilla FFT. So forget *almost* everything you thought you knew. Many changes...

This is the latest WOTG patch for Final Fantasy Tactics. See description for changelist.

i think those pictures are from FF tactics: war of the lions or whatever for the psp

I'm not sure, but I have a funny feeling that the developer is NOT Rodman49, perhaps someone can look into this to clarify?

I mean, did you look at this in the description - "developed and published by Square (now Square Enix)"? Only reason it comes up as "Rodman49" is because Square is not listed on their developer list yet.