Eternal Adventure is a brand new Diablo-style equipment loot adventure RPG game. You are an adventurer, struggling to survive on the dark continent of Demon Land. You can choose to play multiple roles as Demon Hunter, Wizard and Necromancer that will allow you battle with the forces of evil to earn power. You can mix and match your hero skills and spells to unlock thrilling adventures and totally awesome weapons and equipment!

【Key Features】
★ More than 150 maps of diverse styles and difficulties for you to challenge
★ Play for free, and win legendary unique equipment easily. You can be strong just by your effort!
★ complex character development, hundreds of unique & set equipment
★ Unlimited Exploration - No matter how deep you crawl, there is always more to explore in endless abyss.
★ looted resources are automatically picked up. You only need to focus on your adventure!
★ Battle continues even after you steps offline! Just come for a few taps in your spare time!

'Eternal Adventure' will be released in late June by QCPLAY, as the developer mentioned before, it is an adventure game which combine with many elements such as offline, collect equipment, release skills and so on. Today QCPLAY has exposed 3 characters' design images again: Demon Hunter, Wizard, Necromancer.

The painting is inherited the classical Japanese style and the original design of game roles mix with the ACGN culture to help players feel grounded. Moreover, the images still remind players of those feelings of PSP games they had before. 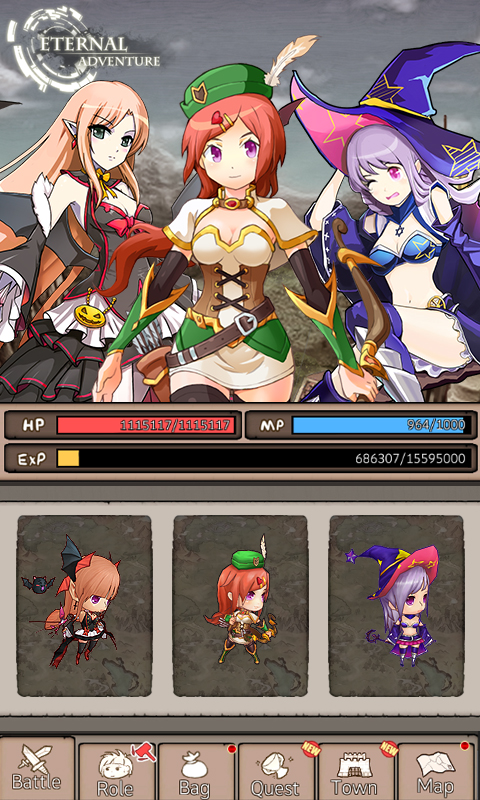 You can find the differences of characters between the painting and the original images, the final paintings adopt two-head physique proportion to makes roles more lovely and coordinating in the whole game scene. Meanwhile, we still release some scenes paintings and monster images. Then we will release more interesting game information and events in our Facebook Page and official websites later, players can like our Facebook and grasp the game information immediately!