Escape: Sierra Leone is a single-player exploration-based survival first-person game. Focused around complete freedom and interacting with a vibrant world, it takes place on an island chain based loosely off of the real life Banana Islands, along the coast of Sierra Leone. There are approximately 21 square kilometers of terrain to explore, fight, survive and escape from. You start with no weapons, no supplies, no idea of where to go - getting those is up to you. No magic quest arrows pointing where to go, no forced objectives or missions.

Set during the 1997 civil war, the main antagonists are the Revolutionary United Front, a notorious group rebelling against the government. The RUF have occupied the Banana Islands and are on a hunt for diamonds; recruiting who they can and killing, maiming, or enslaving those they can't.

You play as a civilian trying to escape the island. Throughout the game, you are forced to make a series of choices that will eventually lead to you making your escape. Everything from how to approach your attempted escape, to how you interact with other people can have an affect on how everything plays out in the end. The game is totally open and you are never given "quests" or "objectives" beyond simply escaping. You may have encounters during the game in which you are asked to help someone, but these are completely open, you can fulfill their request, or simply ignore them, or even kill them, if you wish.

In the 1.0 release, there are going to be at least four methods of escape, and a minimum of 8 different endings, influenced by choices you make throughout the game. Both of those numbers are likely to rise as development progresses. A compact and simple inventory system will make you think about what food, ammo, guns, or items you want to carry. Combat, while not mandatory in any way, is fairly realistic and very brutal. Each bullet hit or wound causes an appropriate animation and sound effect, for both NPCs and the player.

After several years of development and an engine change, I feel like the project has finally gotten to the point where I'm comfortable releasing it to the public. While the game is generally pretty polished for an Early Access project, there is still a lot of content that hasn't been added yet, and some placeholder assets.

If you want to check out the Steam page for the game, you can do so HERE. It's 10% off for the first week (until December 12) as a thank you to early supporters.

To watch the first 4 minutes of day one in Sierra Leone, check out the video below:

The gameplay mechanics are mostly there. They do need some fine tuning, but everything from eating, to shooting, to piloting vehicles is more or less in. You can buy items from shopkeepers, harvest meat from animals you kill, or partake in hundreds of other various interactions with the world. I do want to add more to it, but patching bugs and optimization take a front seat, which leads into my next point.

Graphically, it's getting pretty good looking, however optimization is something I need to work on over the next few months. You will need a pretty decent rig to run it well, I recommend an Nvidia 970 GPU and i5 quad core CPU or better. You can scale it down, but I need to optimize the lower settings. Currently they don't do much in regards to improving FPS, with very the lowest settings only saving about 10 FPS versus the very high settings. That being said, they do make the game look awful, so I'm not sure why there aren't more performance improvements. Here's a screenshot on my computer, I was getting about 45 FPS on my 970 and i5. 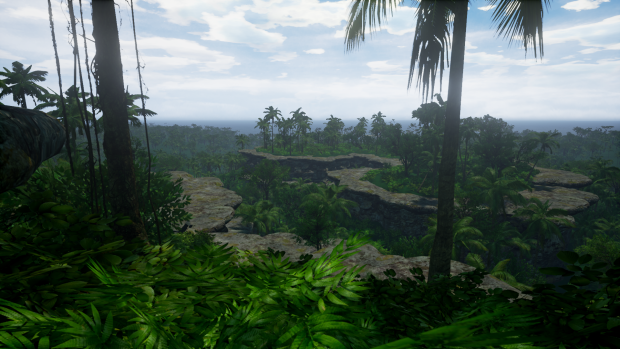 Thanks for the support everyone, whether you've been here since the Escape: Paradise days, or just stumbled across this post now. I've enjoyed working with the gaming community over the past decade, and hope to keep on doing so for another 10 years!

A second update on how the project is going. I now have a release date for Early Access, and some cool new screenshots and videos!

With a new engine and new year, lets see where E:SL is currently at since the process of switching engines started.

Due to several hangups with Cryengine 3, Escape: Sierra Leone is moving to Unreal Engine 4.

A No-BS Update on How Things Are Going

Well, it's been almost a year since I managed to get the Greenlight. I can't believe time has gone so fast and that I've managed so little regarding this...

You will also need the files in this .zip for the game to work, please make sure you download this as well as the Part 1 files. Then, extract and merge...

The free alpha demo for Escape: Sierra Leone. This is an early build designed to give players a chance to try the game. It's pretty rough and unpolished...

Nice to know the project's not dead. I remember having fun tooling around in a pre-alpha build a year or two ago

Thanks, it's changed a LOT since that build, Unreal Engine 4 has let me do a lot of crazy things. There is a possible beta build coming soon, although I may do early access, still have to see how it goes.

sorry 32 bit version doesnt work!!! its missing a file i emailed you before about it! its the ximput1_4 dll and without it there is no way to play! the 64bit version works fine but i dont have 64bit version going by what others say can you please fix it???

Send me a PM and I'll shoot you a link to my email address so I can send that file along for you. Just so you know, the initial release of the game will only support x64 although 32 bit support is planned down the road.

this is how my game looks like can someone help me Youtu.be

That is odd, I'll try to reproduce it, can I have your system specs?