- What: A modern tactical role-playing game about adventures and survival in a special zone left from an ancient race of unknown origin, the spiritual successor of renown isometric RPGs of the early 2000s.

- Status: the end of pre-production.

- Who: Dark Crystal Games - indie-studio from St. Petersburg, Russia. Now we have six permanent experienced developers who worked on such games as Divinity: Original Sin (DOSEE and DOS2), Life Is Feudal: Forest Village, Leviathan: The Last Day of The Decade, and also indirectly related to such games as King's Bounty: Legions, Braveland, and others. We are going to build up the backbone of up to ten people, and at the peak attract fifteen-sixteen.

- Why here: to let the world know about us. Communicate. Answer the questions. Get feedback.

Website - in development, at the moment the most not active resource.

The forum - just started to develop, but it is fully functional and we follow it.

Vkontakte - the most interesting resource for the Russian-speaking part of the community. It is actively updated.

Twitter - very actively updated, and all publications are in English.

Needles of oscilloscopes are quivering: the radio which has been silent for many days suddenly comes to life. The speakers are filled with static, however, you can hear soft, but clear voice:

This is a message for those who dwell in the place known as IndieDB. For those who have survived the explosion.

This broadcast uses an encrypted channel. The frequency is changing constantly, so remember the codesign: Dark Crystal Games. Locked up in a bunker of the Forefathers, we are writing a chronicle of the new world.

This is a story about the people living under the Dome. About the atomic flame that has scorched the Earth, about cultists who devour the flesh of their God, about the blind creatures walking in the darkness amidst the dead men covered with fireflies.

Scientists say that the Dome seems to grow roots into the soil: the land under this desert is gashed with numerous facilities created by the unknown race. Nobody knows what happened to them. Perhaps they are still here, watching us through the thousands of cameras, waiting for the moment to return. We don’t know.

This broadcast is a guide to our database. Art, chronicles, news, log entries and screenshots.

The Maelstrom is coming and the contact is about to be lost. This is not the last broadcast: we are going to be on air on a regular basis, letting you know what is going on in the area covered by the Dome. This is important. We wish to believe that this world still has someone except us.

Let us know if you can hear our broadcast. And wait for the answer. 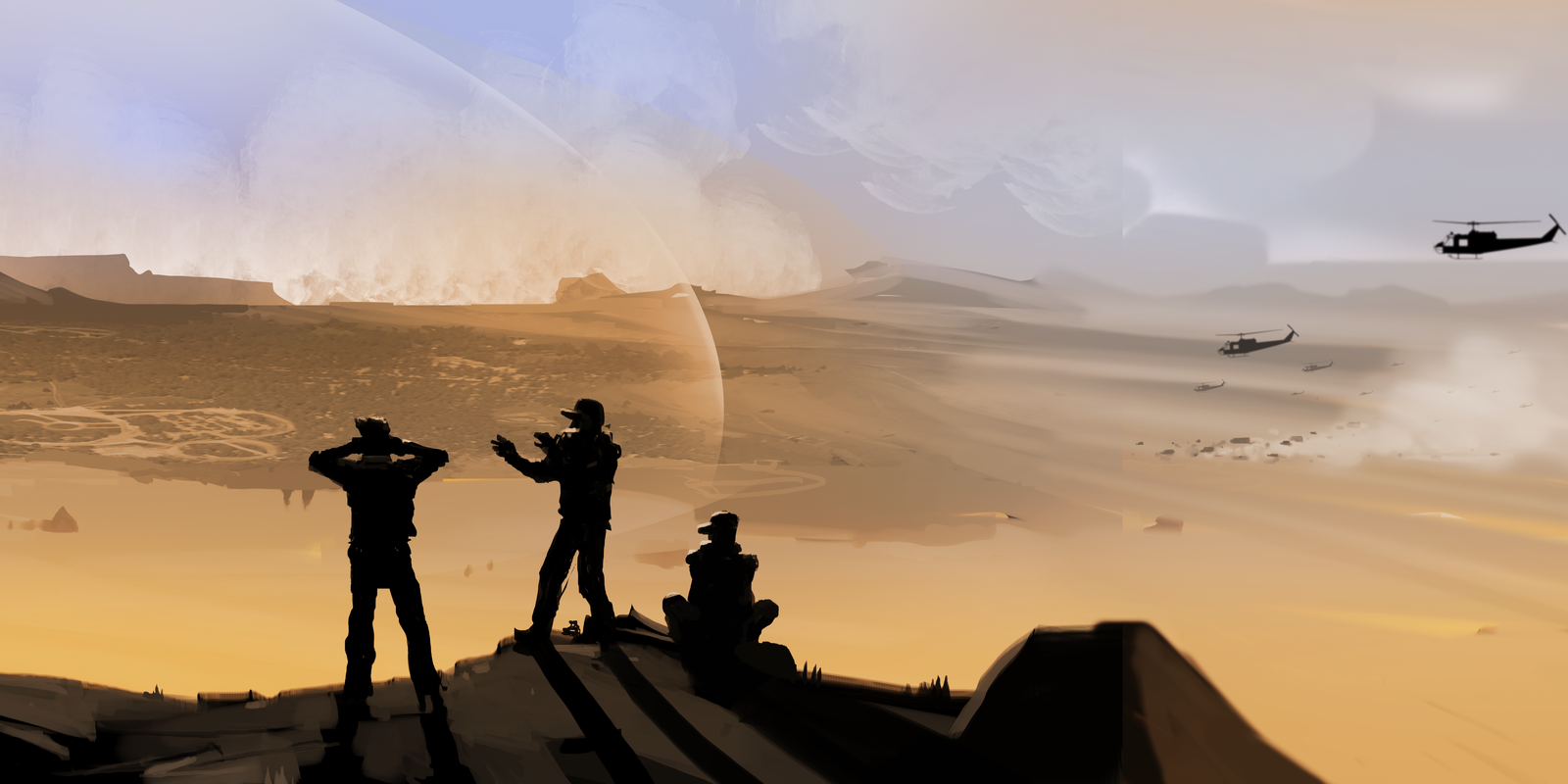 Hello! We would like to tell you about the game we are currently working on.

Meet Encased - the postapocalyptic single-player tactical RPG with the old-school spirit and a modern design. It features a turn-based combat system and isometric camera.

The action takes place on in a desert covered with a gigantic semi-penetrable dome of mysterious origin, which isolate it from the rest of the world. Here lie the ruins of an ancient technologically advanced civilization that are filled with artifacts, traps, and anomalies.

After the nuclear war, a corporation that was researching ancient technologies collapsed, and the remains of its staff founded a few factions, each having its own vision of humanity’s future.

Depending on a profession defined by the player during character creation, some unique dialogue and interaction options appear. Encased has no character classes - the flexible system of skills and attributes allows to make your character whoever you want.

Not counting the prologue, Encased is an open-world game. The global map consists of separately loaded areas, with random events that may occur during the translocation.

During the development, we draw our inspiration from such pieces as Fallout 1-2 and "Roadside Picnic".

Although Encased is the first project for Dark Crystal Games, it is not the first game for our team members. Many of us participated in creating few critically acclaimed games.

For more information, feel free to check out our website:

If you are interested, be sure to subscribe to the C.R.O.N.U.S. official newsletter. In that case, you will receive truly exclusive materials (like gameplay pieces and secret docs) first-hand.

I am really curious about this project. Good luck devs. I am also working in Unity, shame I am not that experienced yet to aid your development. I would totaly like to create some levels/ areas etc. if you provided me the models and other resources once those are made properly.

Nice graphics. Last screen alludes that all graphics will be in that 2D concept-art style? Very good then!
Excellent team if the right people came from those companies.

no it will not be 2D art style graphics.
Check these in game screenshots, well I think those are in-game from intro I suppose:
Darkcrystalgames.com
- last 3 screenshots