In the year 2100, NASA started a campaign to build billions of cute little drones with high energy industrial plasma lasers equipped in them. When they overpopulated the world, drones teamed up in armies to fight for dominating the world. Drone Wars is a game where each player controls an army of drones and fights epic battles against other drone armies. A real time strategy game based in armies of drones where simple individual decisions collectively affect the outcome of the war.

Now the drones are Cutter and I added a Test Level for those who don't wanna Register :-)
Drone-wars-server1.jit.su 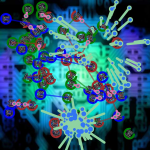