Domi Bellique is a turn based strategic game, 4X (explore, expand, exploit, and exterminate). The player impersonate the leader of a civilization and his final objective is to dominate the world. Building cities and infrastructures, developing new technologies, fight wars against enemy empires is the key to success. The game is somehow similar to Civilization IV for the city development and to Civilization V for the unit movements and the combat system.

With the current release of Domi Bellique the ruleset is complete (but a lot of work must be done to proper balance the game).The game can be played from the start to the end.Still some minor features (pillage, railroad) are missing, but they will be added in future.

Still a lot of bugs need to be fixed.

The AI continue to improve incrementally and now understand almost all the rules to win the game (except espionage and religion). With a high level of handicap the computer players have significant bonuses that make them quite impossible to be defeated. I have played several games, always with standard settings (Size standard, Pace normal, Handicap Deity) but it always ends with me defeated almost fast. I just played one single game without handicap and with my great surprise I wasn't the player with the higher score, with one of the player controlled by the computer that conquered all the cities of a continent.

Now several details of the city can be seen under the city name, without opening the detail dialog. 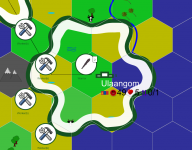 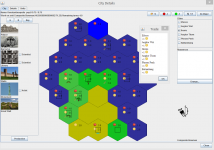 The next release will focus mainly on AI and UI improvement, to provide a better understanding of the game. Also a new series of articles will describe the distinguish features of the game.

In this release: improved user interface, a new simplified view of the city, new graphics is included for building and technology, new settings.

A preview release for Domi Bellique (version 0.1.6). Windows XP or later. It fixes startup problems with the previous version.

The City Must Grow Turn Based Strategy