Teamwork is everything! Join forces with 3 other people as you take control of 4 mercenaries for hire. Play as the Chaser, Commando, Saboteur and Tracer with unique abilities designed to complement each other not just as mere team members, but comrades. Take contracts from mega corporations, called Zaibatsu, to infiltrate, assasinate and devastate their rivals or even their own hired mercs.

Comrade In Arms is an upcoming multiplayer side-scrolling shooter for Web, PC and MAC that will bring a paradigm shift to team based games. Tired of so called "team" games where players run around in a chaos of self preservation? Comrade In Arms has been designed from the ground up to encourage what we call "Competitive Co-operation". Being part of a team and assisting each other will be rewarded, while selfish lone rangers will find it impossible to get far.

The key difference between Comrade In Arms(CIA) and other shooters is something we call authorization.

In CIA, each of the 4 characters has a unique special skill which gives them a considerable advantage when used. The skills are a grappling hook, force field, laser guided rocket and sniper rifle.

This adds a simple yet intriguing layer of strategy to the mix, encouraging teamwork and cooperation. Just like any other team sport in the world, selfish players will find themselves pushed aside for the greater team good.

We decided to release a Training Room version of Comrade In Arms as a way to let people get some previews of the game. Since Kongregate was having a Unity contest, what the hey, we decided to enter.Now that the contest is over, we decided to have a post-mortem. What we did wrong, what we did right and how we could use this contest to help us develop a better game.
The Training Room is playable over at kongregate here.

Our post-mortem and views are over at our blog here. 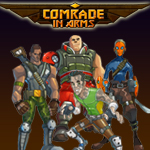 Tags
Embed Buttons
Link to Comrade In Arms by selecting a button and using the embed code provided more...