Counter Strike and Deus Ex mixed in one jaw-dropping game!

Bolt Logan is an unusual man. Four years in the Expedition Corps, 17 forgotten by humanity though a long time ago thousands of colonists had single-man operations on behalf of the Protectorate Federation, 23 been lured into travelling many light years to begin a new life. The planets private assignments - all successful. He was a rising star. Suddenly a time of Valkyria also provided a rich source of materials rare enough for many of great change came. Senate dissolved the Expedition Corps and Logan corporations to break the law in order to get hold of them. Started to lead the uncertain life of a mercenary. That is when he met „Chrome” is an unusual story... 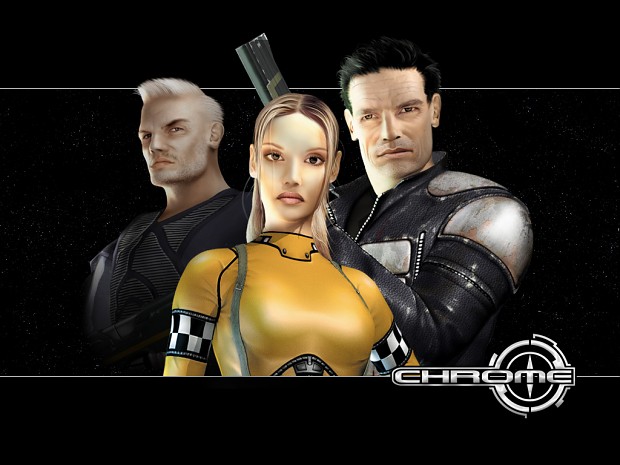 Chrome and Chrome SpecForce on Sale!

Save more than 50% when buying the Bundle on steam before January 2nd.

Chrome is a SCi-Fi tactical Ego-shooter developed by Techland (Dead Island) back in 2003.

In this Action packed shooter the right Tactic is the key to survival!
To take advantage of your implants at the right moment is a requirement to overcome your opponents.

change audio and text of game chrome or the deluxe version called: advanced battlegrounds the future of combat... into german, english or italian language...

since you need AntonioR unofficial patch for chrome, in order to play my gameplay mod... here is an already prepared version based on the files uploaded...

nixos mod for chrome (made easier)

gameplay modification, add this after "Chrome and Chrome SpecForce - Unofficial patch" by AntonioR

Crack for the Chrome 2003 of Patch 1.2.0.0. The game must be patched before putting at the install directory.

Who wrote that disaster of a description for the game here???

Anyone wanna remake this game?

The gameplay has a tactical touch, using your implants at the right time is more important that an perfect aim or super shooter skills.
The vehicles add a little bit extra to the game.

There are also downsides to the game, but if you can enjoy a good story, beautiful environments and like a game that is not all about shooting then this game is a must have for you.