*Note
This page is image based. A text version of this page can be found here. 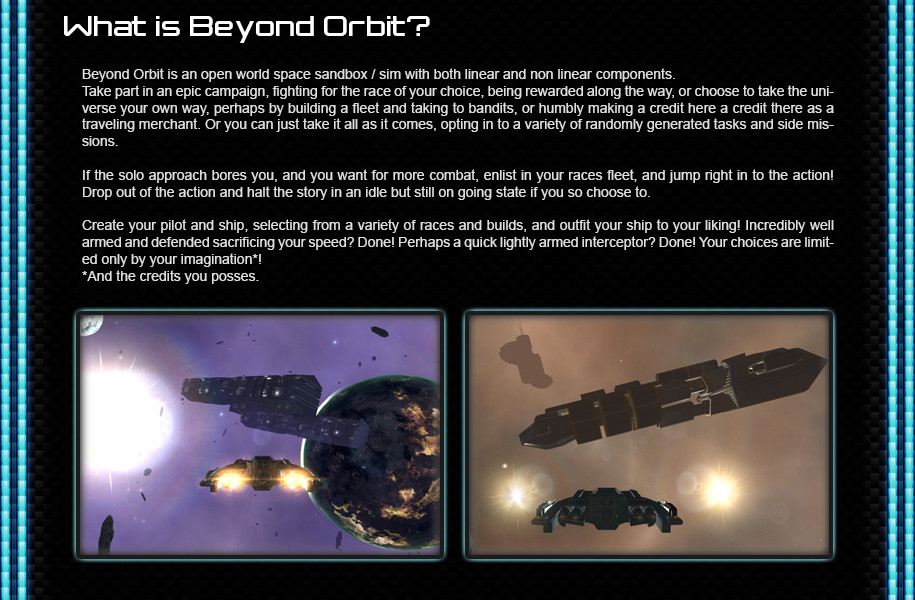 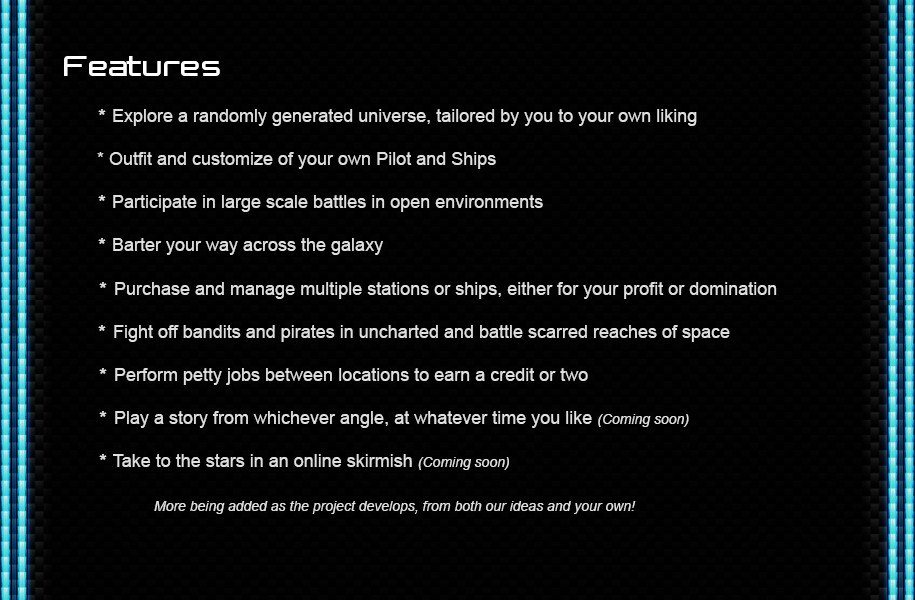 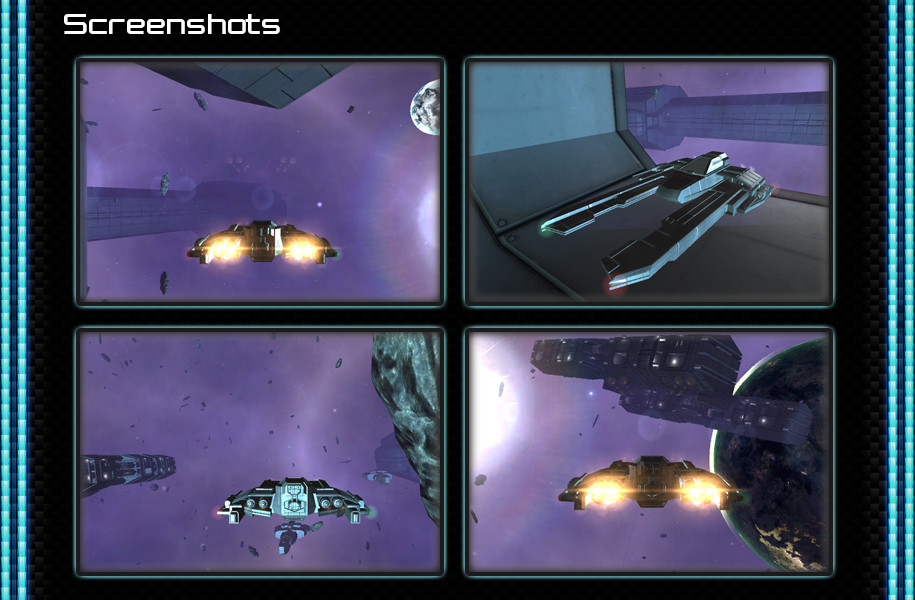 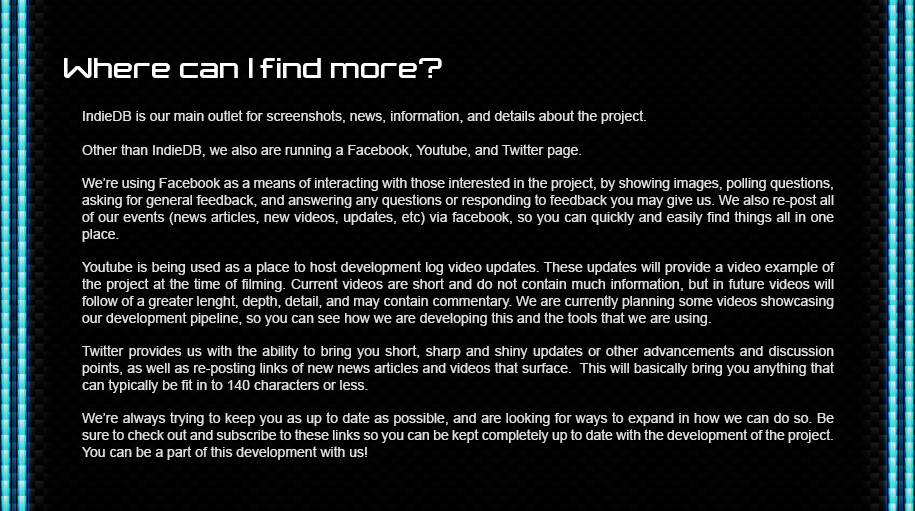 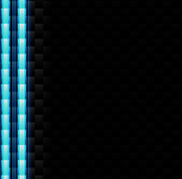 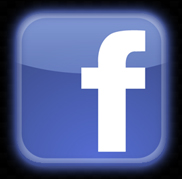 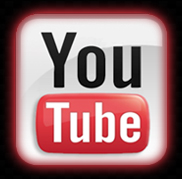 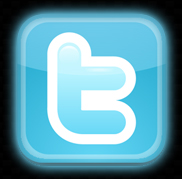 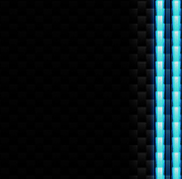 Welcome to the page, and welcome to Beyond Orbit!
We're new to indie DB, so bear with us while we get things set up and sorted out. This is the first of hopefully many news entries we will be bringing you about the development progress of our project, Beyond Orbit.

For the first news entry, I'd like to introduce the team, a little bit about who we are, and how this all came about.

We're a small team of three, all working remotely from literally different corners of the globe (well, maybe not literally corners). There's myself (Ben), Mark, and William. We're based out of Australia, the Netherlands, and the United States, respectively.

I've toyed with most areas of game development, including 3D modelling, Texture Artist, Concept Art, Audio Design, Level Design, Asset Management, and finally Programming. In the community I initially started with Game Development, teams were 'discouraged' to an extent - so I had gone for a 'jack of all trades', trying my hand at everything. I was pretty terrible at most of these, but I settled with programming mid last year. My programming background is incredibly short. Some GML when I was just beginning with game development, some Visual Basic through Highschool, and some Dark Basic. All of that is history. Now it's all about C#. I took to learning the language late 2012, and have since poured my efforts in to Beyond Orbit, and I must say I'm very pleased with my results. There's some more history to this part, but I'll leave that for another section. I currently design and manage most areas of the project, as well as writing a substantial portion of the code behind the game.

Mark is our artist. He's amazing with 3D modelling and texturing, and you can probably tell that from the many images in our WIP gallery. I've worked with Mark many times before, on many different projects, sadly none of which were ever completed due to a variety of factors, the available time of us and others being the main contributing factor. He works with a variety of tools to bring awesome and quality content to the project, eagerly working on his current works just to begin the next. He's been with us since near the very beginning of the project, and is incredibly dedicated and passionate about it, just as I am. Without him, the project would just be a bunch of cubes and spheres shooting capsules.

Will is the newest addition to the team. He brings a lot of experience to the table, which has not only helped the project to grow immensely, but also helped me progress my knowledge of both unity and C# as a language. He is currently studying Game Programming and is close to finishing his course. It is because of him that ship customization and outfitting has been made possible. Without him contributing to the project, Mark and I would've been stuck at a hurdle we faced many months ago. Will's proved to be a dedicated and eager contributor, finding the time whenever he can to work on the project. Lately, he's been focusing on implementing an improved GUI, between studying for his finals. 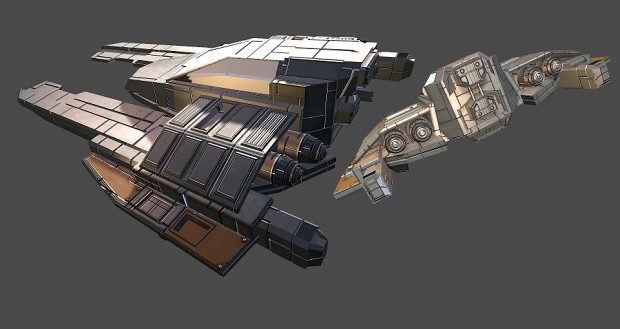 The project was started in October of 2012, and was literally born by the words 'dude, we should make a game again' over a skype message to a previous team member. We spent a few weeks planning and designing each element, and had an incredibly basic engine in ActionScript, made by this aforementioned team member. About a month after the idea was made, we approached Mark, and another programmer (now forming the team that we all initially were many years ago), planning to take the project from a top-down, 2D flash game, into a fully 3D game made in Dark Basic Pro. Mark and I worked on some pretty primitive art, as well as designing the core aspects of the game. About a month later, both of the programmers sadly had to leave to finish their schooling (very similar to our initial breakup), and Mark and I, an artist and a half, were stuck with no way to continue the project we'd poured so much of our time and effort in to.

I took the helm, first trying to branch off of the work we already had in Dark Basic, with little to no success. I had messed around with unity previously, and thought I would put a decent effort in to it again. This is where I seriously started to learn C#, and the project truly began. About a month and a half after we really got in to it, along with another programmer, the three of us parted ways briefly. Mark and I came back, and reaffirmed our passion and dedication to the project, which still sticks to this day. Shortly after, we found Will, and two months later, here we are, with six months spent on development in total, and what we think is a fantastic representation of our learning experiences, dedication, and passion for the project. 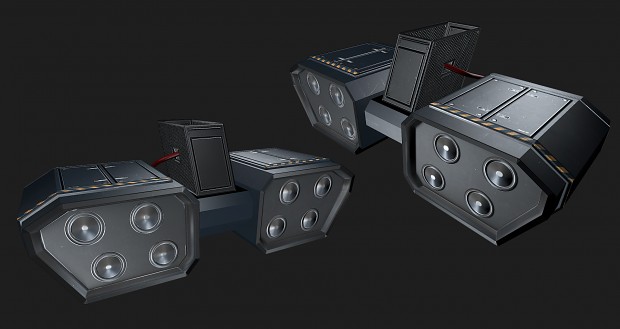 A brief insight in to how we've formed our small team, and how this project was born. I hope you've enjoyed reading, and I encourage you to keep an eye on this project via one of the many forms of social outlets we're using. By doing so, you can participate in the development cycle with us, by offering feedback, suggestions, and participating in discussions. You'll stay completely up to date with how Beyond Orbit is progressing! Our dedication and motivation for this project is fueled directly by the support we have and continue to receive from those who know about it.

Bye for now, you'll be hearing from us very soon!
Drone5

You should get that looked at! Thanks! We'll eventually be starting a kickstarter campaign and perhaps will also have a donation area in the future!

I love this type of free-form space sim, and the graphics look top notch! Tracking for sure.

Edit: AND it's a randomly-generated world? Put me down for two!

We're trying to improve it as much as we can. Next up is engine trails and planets! We're glad you like it, thanks! (Sorry for late reply)

Indie
Twitter
Tags
Embed Buttons
Link to Beyond Orbit by selecting a button and using the embed code provided more...