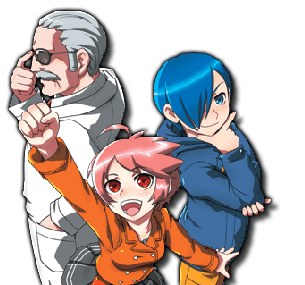 One of the most intense 2-D shooters ever made by renowned developer Treasure has now been re-designed and perfected for the Nintendo DS! Take on swarms of enemies and unleash a sensory overload of fireworks-style missile attacks in over 160 levels of thumb-twitching action.

Changing the Game... on Consoles

When making my rounds in the exhibition hall in-between panels and presentations, I naturally gravitated to games that incorporate the ability to create custom content. Usually, this means PC games made by companies that have supported and generated modding communities around their franchises. However, there are a few console titles that are pushing the boundaries of creating user-generated content for the controller-wielding masses. Here are a few of the games on platforms other than the PC in which you can look forward to creating your own levels and change the game.

All the hardcore tinkerers out there may be have been disappointed to hear that there would be no mod SDK following the release of Far Cry 2. Developers at Ubisoft, however, are making good on the promise of a level editor available with the game at launch. Clint Hocking, Creative Director, demoed the level editor for the Xbox 360 version of the game live at PAX.

For a game as technically stunning and complex as Far Cry 2, the level editor makes the creation of detailed African savannahs and jungles an elementary affair. It draws many parallels to the tools used in the Sandbox 2 editor for the CryEngine 2 but with an uncluttered, streamlined user interface tailored for use within a console. Within minutes, Clint constructed a colonial village on a golden savannah plain bordered by undulating hills. This was a level complete with vehicles, foliage, and ambient sounds. Then, within a few button presses, he was able to covert the whole thing into a jungle environment - complete with early morning fog. The ease of construction and replacement of assets on environments of this scale, on a console, hasn't been done before.

Of course, all of this incredible ease of use comes with a price. No user-created assets will likely be allowed to be imported due to stringent controls of the platform. However, users will be able to use all of of the game's official assets. It remains to be seen if the PC version of the editor will prove itself as viable, but Far Cry 2 deserves to be recognized for its efforts in pushing user-generated content creation on consoles.

I got to see this game up close and personal for the first time at PAX and it's charm is undeniable. Even with all the hype surrounding it -and while playing the game on a crowded show floor- the game still manages to unleash the inner child within. I consider this game to be more of a toy, similar to Will Wright's design purpose behind his "Sim" games and Spore. The real meat of the game/toy is in designing your own levels. Imagine having your own virtual toy box full of various odds and ends and then going to town with it. Make you own Rube Goldberg-esque machinery, labyrinthine mazes to explore or even constructing elaborate platforming puzzles to stump your friends.

This whole game's light-hearted undertone and whimsical nature is amplified by the amount of expression and emotion conveyed through players avatars. Character customization not only gives you a distinct personality online, but players can also make their avatars display different facial animations for happy, sad, angry etc. Tired of creating things on your own? Jump online with a friend for some co-op level design. All these features point to LittleBigPlanet being the trendsetter for both social gaming and user content creation on a console platform. The amount of variety and flexibility will lead to an unseen level of downloadable content to draw from, providing Sony's infrastructure can handle the stress. My hopes for this game are high; high enough to have me obtain one of the shiny black monolith machines in salivating anticipation (it's the only game I've pre-ordered -- ever).

This game actually came to my attention through an ad screened before one of the panels at PAX started. One of the game's main draws is its sound load feature. Bangai-O can convert any level you edit or create from scratch into a sound file. Using the DS microphone, you can also play the sound files from any source and download the levels for instant play. It's an interesting feature; one that's managed to bypass all of Nintendo's default friend code malarkey. As a result, it's really opened up the possibility for anyone to share their custom levels without having to exchange their credentials first.

So far, Bangai-O's main source for level downloads has been Youtube. However, here at ModDB, we've since started a profile for the game. Naturally, we think it's a better venue for hosting and discussing the creation of custom levels for Bangai-O Spirits. If you own the game, why not head over there and give it a whirl.

Sound load, what like with the old cassette tape games on the Spectrum, Amstrad and C64?