Ash of Gods is а multi-genre project that features most of the typical elements of a visual novel, tactical turn-based role-playing game and card strategy. This is a story intending to show all the complexity and ambiguity of moral choice. Good people often become rascals while inhumans behave more human-like than humans. This is the story of “angels” who after being given free will turned the life of humans into hell in the absence of a god. This is a novel that shows you that no conflict has a right or a wrong side because even your enemies have mothers and children.

Putting a hand on my heart, I can say that I did not plan to write this diary, but in our profiles on social networks a pool of questions had accumulated, which I would like to answer all at once and I just have a little time for it. This time I will talk about how we made content – characters, effects and why there is so much text in the game. I will add a little bit about the readiness of the Feng’s line. I will also talk about the state of the translation and the parallel translation into 9 languages. If the text seems too serious, bear in mind that I am writing it quite sober – this seems to be the first such diary, give me a little slack for it.

Special effects are one of the most difficult parts in the project. Among our artists there is no an FX-guru. Most of the effects are the result of a collective creativity of our art director Igor and the artist Andrei Zherdev. Most of the effects and techniques of working with colors are his doing. Work on the FX begins with us formulating the text, what should happen step by step, after which Igor and Andrei draw key frames for the future effect. This allows us to simplify the work of the FX animator as much as possible.

You know, for me it was amazing how differently the same effect is perceived when you see it along with the sound. Whenever we had added a sound to the next effect, it began to play with new colors, and the visible flaws were smoothed out. There are a number of complex and composite effects in the game, such as one of Blans’s blows, which we had created approxibately, without a storyboard:

The people we had given the game to – friends, a number of backers from Kickstarter, – they all said that the game really needs voiceover for the author’s text – when playing you have to remove your eyes from the picture to read, instead of looking at the picture. We were able to record Russian and English voiceovers for the author’s text – this is about 12 minutes of voice during the game. Also voiced the screens of switching characters and texts that are written on scrolls (as for example at the very end of the game):

Right now we are working on the voice acting for the characters themselves. Dmitry’s friend (Erokhin) kindly provided us with the opportunity to select samples from his ~ 10,000 recordings of groans, laughs, sneezes, coughs and other indecencies from a few dozen actors – I selected about eight hundred to simplify the life of our SFX artist Gennady. It was the most horrible 16 hours in the last six months – almost for two days all I heard was various screams, moans, and groans.

Initially, our plan with SFX battles was rather simple – screams of characters in combat scenes were supposed to be the only voice cues in the game. Everything went down the drain on the design of sounds for clerics and priests (Vai, Skur, Alus, Ramlin). It turned out to be very boring to conjure in silence. Sergey dug out his favorite desktop dictionary of the Enochian language and wrote simple spellings, like “Save and protect!”, “I’ll be your key” and “Forgive Your Son!”. We have used Echonian language for it, and I rejoice that except for some rogue mediums of Victorian England and the churchmen in our game, no one talks in it. Right now we are working on the voice acting for the characters themselves.

How we draw the characters

It all begins with the author’s description of the character – followed by the selection of examples for the pose, face, clothes and choice of colors. For example:

The major impression is beautiful and disgusting at the same time. A slim, imperious and arrogant aristocrat, who immediately makes you want to smash his face. Spoiled and depraved bastard. A spender, does not miss the opportunity to flash his wealth, arrogance, and the contempt for the common fols. The void of strength, courage and intelligence is ftlled by the excess of cunning, rancor and stubbornness. He never forgives anything and does not stop at anything.

The worst thing that can happen is the need to redraw a character, so we use 5 stages to work on each character: 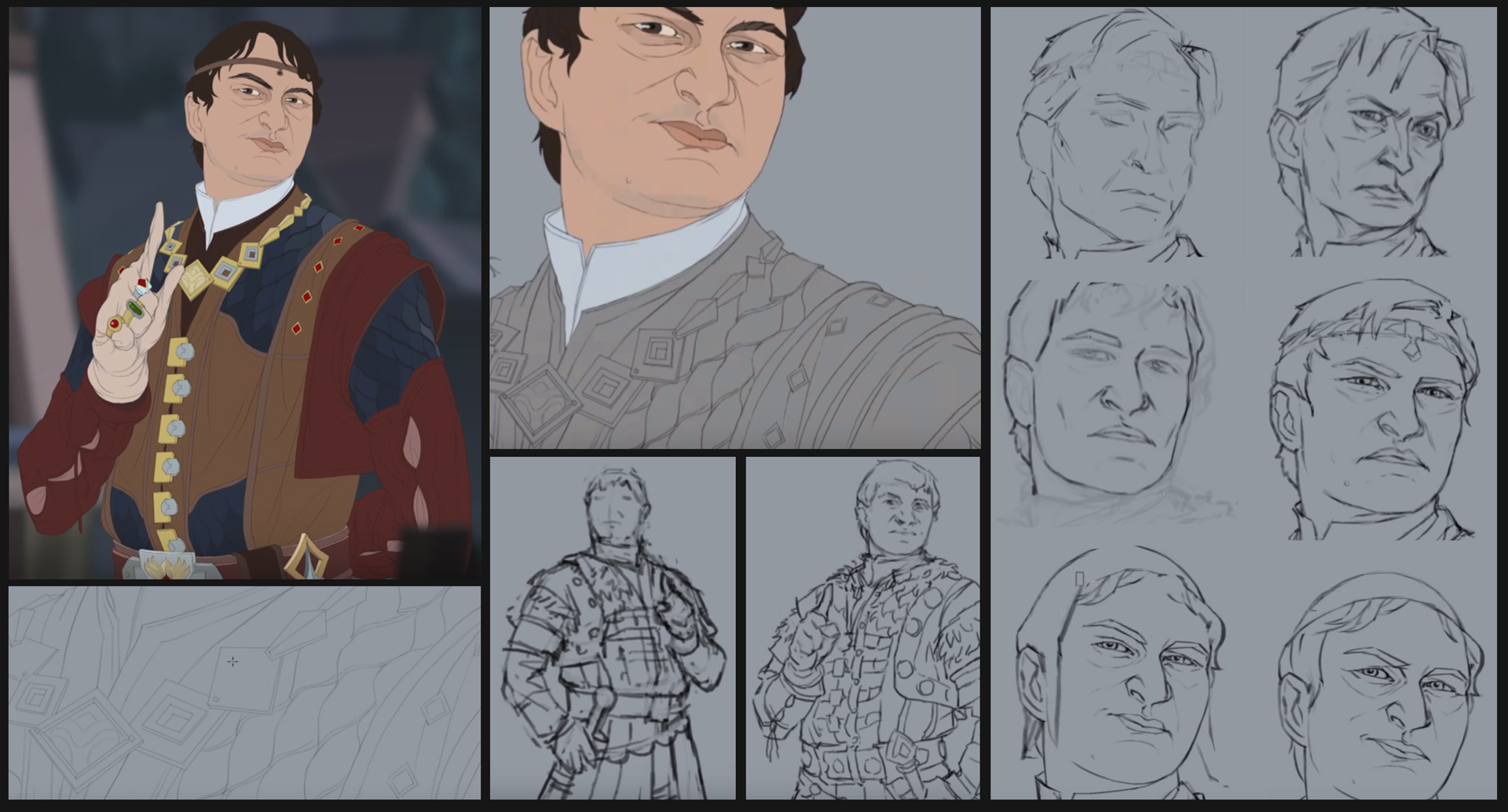 The steps are the following:

In the video below you can see all the stages. A full cycle for one character takes about 3-5 days:

The main source of information about clothing – “Fashion in the Middle Ages” from Suit-History and “Medieval Fashions” from the 1998 Dover Coloring Book. Feel free to use our table of the color palette for clothes that we used in the game: 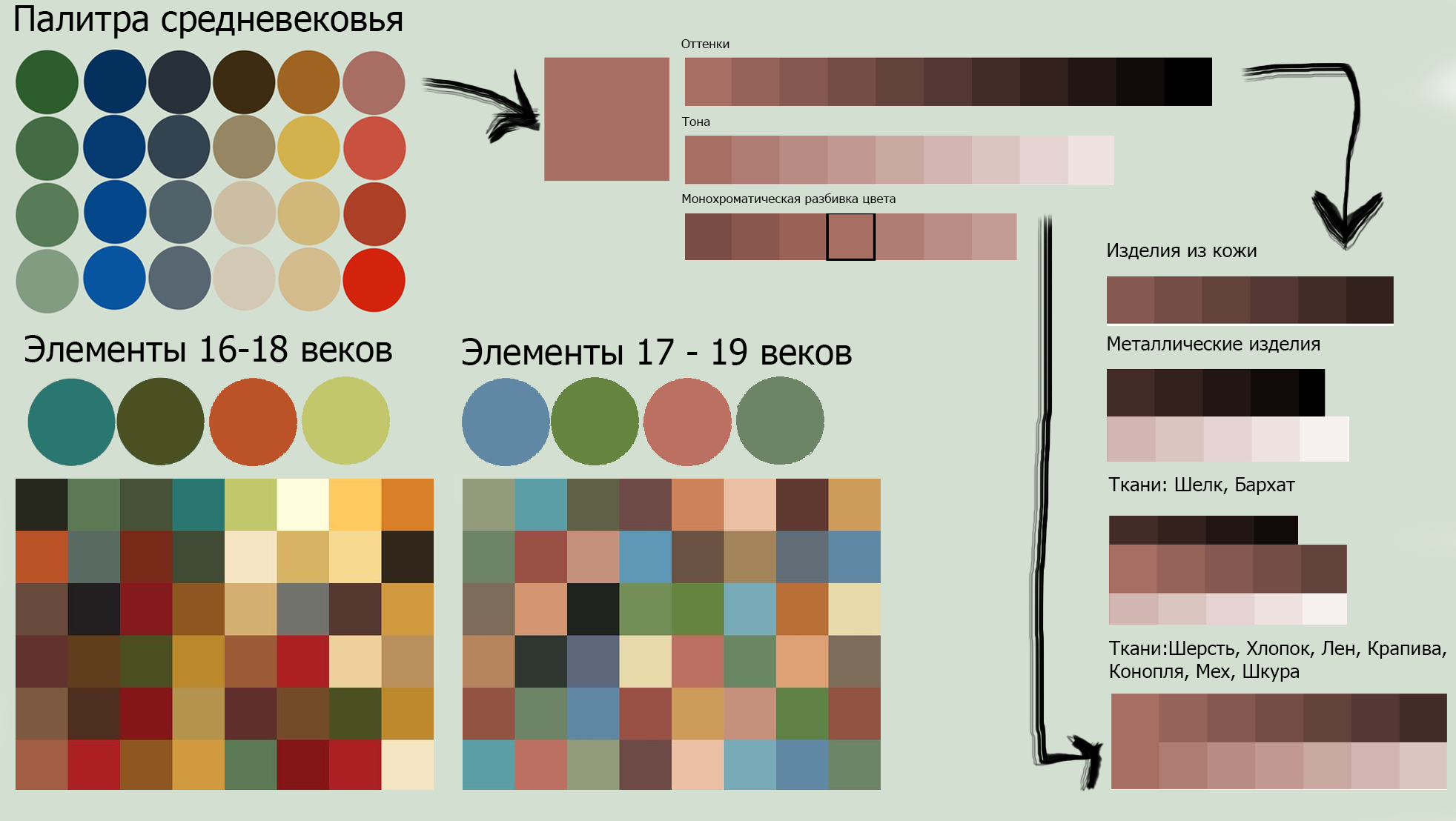 State of the translation

Instead of a thousand words – today’s update from the localization platform. By the release the game should be ready – Russian, English, Ukrainian, German, Chinese, Italian. A few weeks later – Polish, French, Spanish. At the end of summer – Brazilian Portuguese. In case you are a publisher or is interested in landing us money in some form for localization to some other languages – reach out, and we will be glad to hear you. And yes, guys from Kickstarter – so many languages became possible only thanks to you. And, of course, thank you dear interpreters, that you agree to help us at completely bargain prices – thank you very much! Your help is invaluable!

Hey, fellow countrymen from Lokalize, give a discount on the subscription !!! Pretty please (wink)

For localization, we use the Lokalize platform-it has built-in mechanisms for Fuzzy Check, Translation Memory, a system of permissions, allows you to track progress in parallel, has a built-in task tracker and integration with Slack.

Why is there so much text in the game

Now the game has 230,050 Russian (249,355 English words). 1/4 of this amount is in the main story. In the storylines of the three protagonists, there are a little less than three and a half hundred events which happen to them on the road and about a hundred possible battles.

In one playthrough you will encounter about 25-35 fights and about a hundred events. Most of the events will allow you to avoid fighting if you want. And we tried to ensure that every game dialogue allowed you to “cut” through the dialogs, omitting the lore, if you are not interested in it.

The game is a large interactive book and if you want a visual novel. Probably you have played something similar in your childhood? Yes, this is a niche story and now, after the first wave of press reviews, I get nervous every time. Nobody had complained so far and that is worrying – when there are complains – it is clear what you need to work on. What to do when the game is prased is not clear. I still can not believe that we did it right. You see, even the characters in the profile turned away and are nervous? 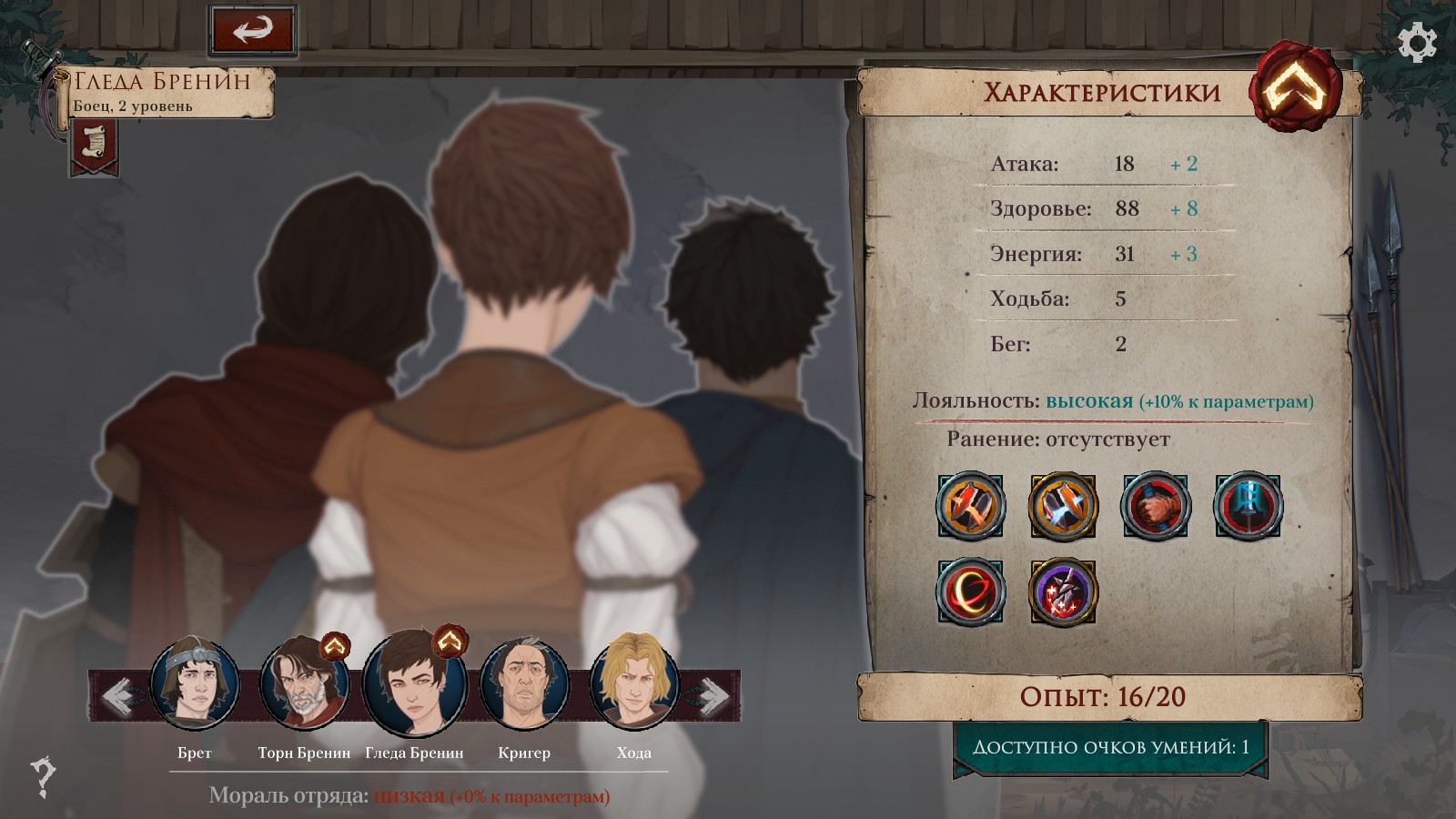 We have promised 12-14 hours for one playthrough – in fact, according to the first tests, the full playthrough will take you about 18 – 24 hours. The spread depends on the route that you will choose the map – the slowest way will take about 31 hours. Most of the time – in battles. About 50% of this time is spent on battles, 15% on management of the routes on the map and 35% on reading dialogs and quests. However, if you do not want to go deep into the lore – every lower variant of answers in dialogs allows them to be reduced to the minimum, receiving only a fraction of it. And in the story hubs, you can choose only the “red” (important) icons – this will reduce the text part by 2/3.

Instead of an afterword

Dmitry Erokhin and Sergey Malitsky completed the last set of events for all the protagonists on the map. The last set is 104 events that can happen to our heroes on the road. This is the last batch of text to be translated. We drew, assembled and tuned all the scenes of Feng – this week we will begin to include them in the main stream of the game and test. It looks like a small feat, when the war is almost over – now everything needs to be done “yesterday” and the guys outdid themselves with this part of the work.

Now the game is assembled and running on PC, Mac, Linux (Ubuntu, SteamOS) and takes 2.7 GB of space on the disk. We are doing our best to complete the multiplayer – we add levelling up, prizes, clans, ratings. PvP part should be ready in March.

With the release date getting close (March 2018) we've decided to put together a DevDiary, summing up our recent progress: completely new UI, significantly...

We are happy to announce that we just published Ash of Gods' Steam store page! In the article we tell you more about the game and what to expect from it.

Contains the latest updates and insights on the changes in the storyline, fresh game builds (including an Android one), UI and other topics.

Ash of Gods - 100% Funded on Kickstarter

Hey guys! As you may know, our Kickstarter campaign is coming to the end but tonight is a great night because WE DID IT! We reached the initial goal...

Wrath of The Abyss Roguelike