Arpago is action RPG-lite set in cartoony fantasy world. You can choose one of 3 playable races, one of 5 character classes, and explore the world, fight various enemies, track down the villains by completing quests, talk with many NPCs, get some sweet loot, team up with your partner and do all of that in co-op!

Thanks for voting and helping Arpago on it's quest to become the 2022 Indie of the Year. You are now in with a chance to score some free games. Help this game secure more votes by embedding the widget (or link) we have included below on your favorite sites.

Haven't written for a while, but I have been working on the project tirelessly :)

I managed to implement a different animation system for weapons, each one can have a unique animation (instead of predefined by very broad weapon type). Here's an example - Slingshot for Ranger:

I completely remade buffs/debuffs system - replaced it with Aura Controller, each aura can have its own icon, effect, length, etc... all affected by player/enemy stats. And it is all visible on the hud :D

...as well as a few new particle effects, here are some examples:

I implemented Pause functionality, as well as a bunch of in-game settings (which are saved, yay!)

Added Death system - for now, a short message is shown for a few seconds, and then you get teleported back to the last camp you rested at. Later, I plan on healing all enemies around the player who died, to remove possibility of rushing back after respawn again and again:

Created a ship that will be present in the game's intro sequence:

Entirely new Fog of war (map discovery) controller - now it's pretty slick, and it's saved together with each player character separately. I really like it :D 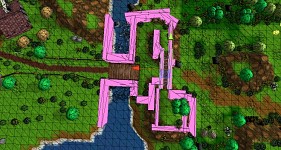 ...and currently I am working on dialogues and quests. Here's a little walk around the Dagis village, and a dialogue with farmer Ferk, who's probably the first person you'll meet there.

In case you have any questions or remarks, feel free to write here :D
...or visit project's Twitter Twitter.com
...or visit its website - Arpago.eu

I managed to make several improvements to my workflow, as well as create a bunch of new content and add the necessary polish here and there :)

Overview of Arpago, it's characteristics and features!

I really like the game. Can't wait until you release a beta version so that I can try it out.

Hey, thanks! Sorry for the delay, I am still tirelessly working on the game, but as I am alone, it's difficult to keep all sites updated :) Demo is getting closer, but I'll release it when it's done. I've been posting to Twitter @ArpagoGame if you'd be interested :D

You did it! *confetti*

This looks great! Definitely gonna keep an eye on it.

Hope the best for you, and I look forward to future developments.

Might & Magic VIII: Day of the Destroyer Role Playing