The lands of Arafinn are afflicted by a smoldering conflict that outlasts hundreds of generations. When the North fell, Nangrim, home of the Stonebeards, soon got overrun by the invaders. Now - centuries later - it is the player’s quest to discover this forsaken place and reveal the secrets buried in the cold depths of Nangrim. 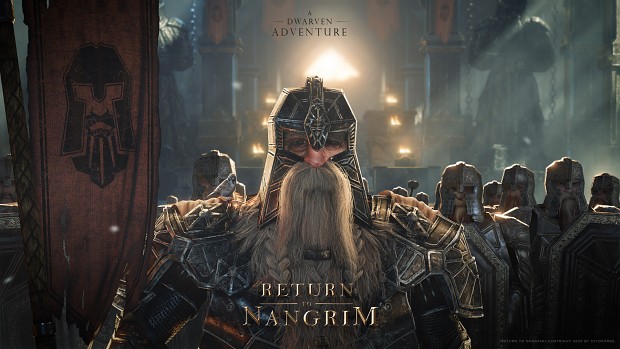 Return to Nangrim is a first-person fantasy adventure with RPG, survival and puzzle elements. The game involves exploration, research, tool and weapon crafting, epic puzzles and defense strategies in order to unveil the secrets and story of Nangrim.

During his journey, the player will find books written in a runic scripture that provide information, story, and hints. In order to be able to read those books, the player must learn to translate those runes. To do so, he is given hints for example in the form of translated fragments, which over time and with additional research, allow translating the ancient language of the Stonebeards.

Introducing a brand new Storybook line from the team at Sycoforge

Exploring the Arafinn universe in a new, engaging way.

Sycoforge is a video game development company, made up of a team of specialized engineers, accomplished designers, and gifted mathematicians. However, their goal is not only to create groundbreaking and engaging games, but also crafts detailed stories and comprehensive settings to offer an immersive experience to the audience.

The firm is due to launch a new inventive and edgy game, “Return to Nangrim,” later in 2018.

This game is already sparking a significant amount of interest in the gaming industry, especially because of the breadth of its intricate detail. The unprecedented scope of the Arafinn cultures and societies includes a new measuring system, four original languages and an impressive twenty-five provinces, just to mention a few perks.

To let the audience take a peek into the Arafinn Universe, which is the game setting, the developers have just released a special Christmas gift for fans that are anxiously waiting for the release of Return to Nangrim: Chapter 1 of a new storybook series. This exclusive content revolves around the incredible tale of the Guardians of the Grate Gates of Nangrim. Chapter 1 also consists of a sneak peek into the society, unique stories and intriguing characters that will feature in the upcoming game.

The Storybook series is essentially a string of interactive audio books. One of the coolest features of this project is that fans will have their say on the evolution of the story. There will be a democratic vote focused on the next topic, which could be anything fans would like to know more about - from the Stonebeards to the People of Valdril, among others.

To find out more about the concept that is breaking the conventions in the online gaming world, take a look at the first chapter in Arafinn's storybook line and get a taste of this exciting universe.

The interactive audiobook for PC/MacOS is available here.

Dive into the world of the dwarves and shape 'Return to Nangrim' together with the devs! Become part of the Players Guild, a selected group of testers...

Behind closed doors... a guide to dwarven door mechanics

This article is about how we develop mechanical parts in our game Return to Nangrim. It explains the steps from research to realization and gives insight...

Sycoforge is an elite gaming solution provider located in Zurich, Switzerland. It aims at creating unique gaming experiences for avid gamers. At Sycoforge...

Sycoforge Games, an interdisciplinary team of engineers, mathematicians, artists, and other types of creative media individuals based out of Zurich, Switzerland...

Guys, this looks so awesome! A game about dwarvery? TAKE MY MONEY!

Awesome! I cant tell how much I love fantasy stories featuring dwarves! Any ETA? Is it VR only?

Thanks! There's no exact release date. But it will be somewhen in 2020. Of course, it will be playable without a VR device on flat screens.

Nice to this great progress!

This is looking super awesome! Can't wait to play it! :)