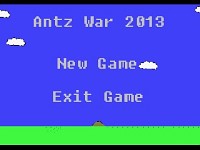 A RTS focusing on two ant colonies at war. The black and red ants, in a open world wilderness. You play as the black colony and must eliminate the red colony from the area to claim it as your own. Simple enough, gather, build, attack, the basics. Featuring two modes; Campaign and Survival. In Campaign you must follow the story of a rivalry between the two ant colonies and complete various missions from gathering food for the Queen, guarding against a invasion, escorting wounded back to the nest, and more. In Survival you are given some starting ants and must fight against the red colony for survival in a small location full of dangers and scarce food. Dangers include humans walking around, lawnmowers, rain, snow, spiders, and more. Classes are worker, soldier, breeder, and queen. Environments range from a backyard to the attic of a house. This is a solo development project expect nothing great nor anything quick for play.

To promote Ant Warz 2013 and grow its popularity (top games), use the embed code provided on your homepage, blog, forums and elsewhere you desire. Or try our widget.

I know it's not much, but an RTS isn't something simple. You cannot just place a few images and make a game, this isn't Pong! Or some Japanese Visual Novel game. There is A LOT of coding behind it all, and once I get more free time I'll work more. But not all of us are a no life.

Moves the battle away from the common Western Front focus of World War II and refocuses on some of history’s most brutal and devastating conflicts on...

Discover a strange and wondrous land in the uttermost East: the Orient! This highly civilized land will provide you endless opportunities. With the help...

Dominate the 18th century on land and sea. Command the seas, control the land, forge a new nation, and conquer the globe. Empire: Total War takes the...