Infiltration Zero is a single player top down stealth game where players would need to go through multiple paths and puzzles of their choosing to be able to get from start to end. At the end of each level, players would be facing a boss that would require players to think creative and imaginatively on methods of defeating the bosses. 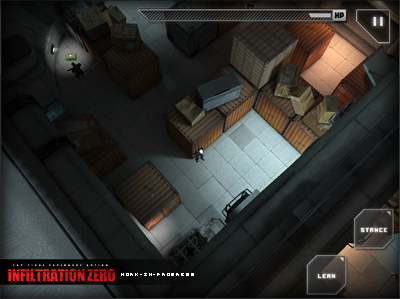 Its currently being developed using the Unreal development Kit for the IOS (ipad) and soon later for PC and mobile phones.

Thanks for voting and helping Agent RX on it's quest to become the 2022 Indie of the Year. You are now in with a chance to score some free games. Help this game secure more votes by embedding the widget (or link) we have included below on your favorite sites.

AGENT RX :The Game Is out now! Check out the app store

Guys , We are finally releasing Agent RX (Formally known as Infiltration Zero) The currently have 2 episodes. More updates will come soon. We hope you...

We are looking for beta testers to help with our game development.We also have some new updates on our enviroment.

Some updates for you guys ,like our new main menu, Cutscenes and announcing some stuff.

Hi guys. Another update. Hope this video will get you guys excited on our game. We have been working hard on polishing the core gameplay of the game and...

i will definitely be interested in this game! keep up the good work! :)

Thanks man!!!!. Come to our facebook page Facebook.com /InfiltrationZero and like us for more updates :) .Give us some feedbacks and suggestions on how we can improve the game :)

how much do we pay for this game?

Not really sure yet but we are planing to go for an episodic style. So it will be in episodes similar to the “ Walking Dead Game” series where you buy them separately . Episode 1 maybe free to play, but the rest of the episodes players will need to purchase them to play. What do you think the price should be for this kind of game?

And this will release on PC as well?

Yes,as soon after the IOS version.:)

Great artwork and in-game scenarios, can't wait to see it in action :)

yeah mgs style tracking for sure

I would really love to bring this to android but the problem now is that we are using the basic Unreal development kit which does not provide the android license . Maybe after the IOS and PC release, will see if we could get the the android license .Thank you for your interest in our game :D