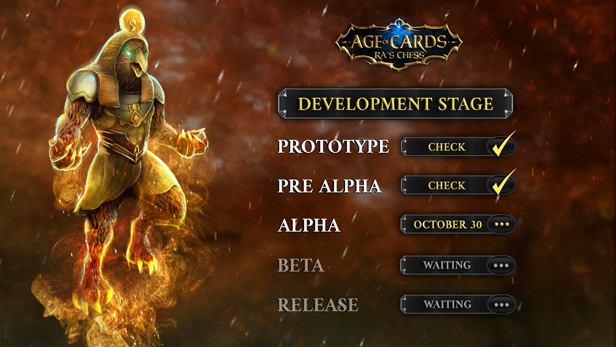 Anubis and Frejya went Purgatory after meeting with the Phoenix in on the Iron Mountain. Ra is playing and drinking wine at the tavern all day in purgatory.

Seeing his old friend Anubis and Frejya, whom he had been in love with for hundreds of years, Ra becomes happy. Frejya is still very beautiful. Anubis and Frejya ask Ra for help. The only salvation of the world is persuading Ra. Ra demands that Pangu's curse be lifted as the only condition for help. This request is sadly denied..

Ra’s Chess is a strategic chess card game for online multiplayer between two players. Despite being easy to learn it is complex and includes deep strategy. Each player has to plan and conform to every situation and control a team that they assembled, while their goal is to kill the enemy forces and enemy hero. Every player has an attack and movement right for a turn. We have 4 different heroes with unique ultimate skills but the same minions with the same abilities. Every minion has different attack and movement range. Players need to create their own deck according to their own playing strategy and use created decks depends upon turn and mana system.

The game features unique mechanics that set it apart from the other existing titles in the Genre:

Ra's Chess come in 4 different rarity levels (Common, Rare, Epic, Legendary) and can be equipped onto any of your Heroes - unless the item is restricted to a specific Class. They will passively enhance your party in various ways. Some Cards will be better on a certain Hero than others, and part of the fun of Ra's Chess to come up with the craziest combinations possible. All CARDS will be obtainable just for playing Ra's Chess totally away from pay to earn deck system.

I would like to our strategic chess-card game to you. We are very early periods of the game but we need some feedback about core game mechanics and to see what parts we need to upgrade. We are a small but ambitious team that is why we need players that will share this journey with us.

You can get your beta keys ageofcards.com

Ra’s Chess is a turn-based chess-card game which is developed by Indie developer NTROY. Such as other examples of the card games, two players face off turn-based combat. Despite being easy to learn it is complex and includes deep strategy.

Each player will have 15 cards for the alpha version and heroes have unique ultimate skills. The goal of the game is to destroy the enemy’s army cause all minions healths depends upon the heroes’ health.
There will be two game modes with the same game screen for alpha-beta. That is why each mode’s starting period and count of minions different but the same abilities. Each player has a movement and an attack right during his/her turn period.

Heroes
There will be 2 available heroes for alpha-beta one of them is Freyja and the other one is Ra.
Freyja is a melee hero and it has “immune” passive skill which cannot be taken reflection damages.
Ra is a range hero who can hunt his enemies away. 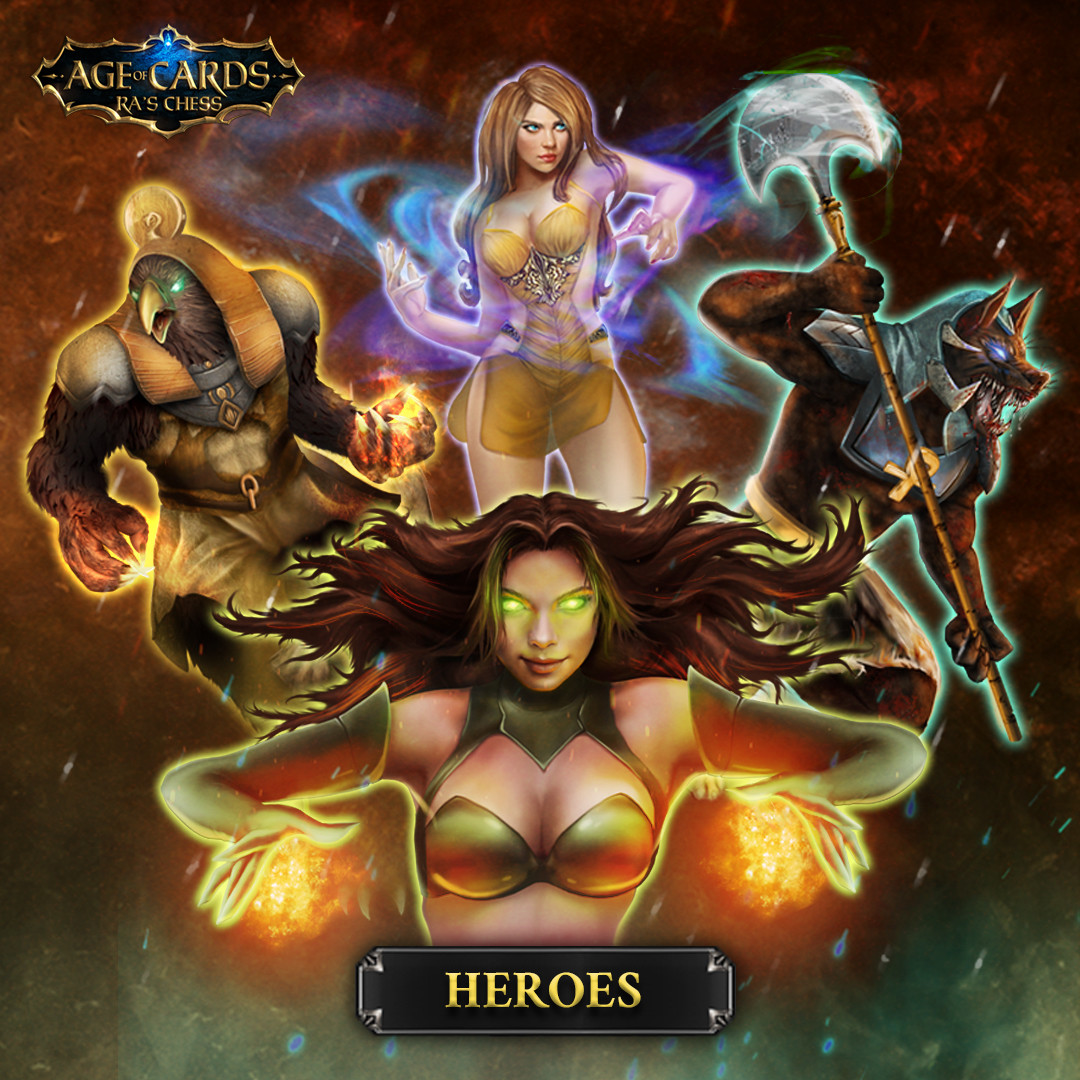 Minions
6 different type of minions with the same ability for each player. Characters have 3 types as “Minion, Siege and Hero”
Every minion has different movement and attack ranges.
Moreover, some of the minions have passive abilities.
Cavalry: Quick and defensive melee minion.
Dragon: Mid-range flying minion.
Infantry: Such a pawn on the chess but it will help you too much to spoil your enemy’s plan. many different strategies.
Catapult: Long-ranged siege minion but it has some disadvantage.
Archer: Ranged minion which allows you to different strategies.
Chieftan: “Vizier” with the lifesteal ability.

Cards
Every player has the same deck for alpha-beta and both players need to withdraw a card among 3 cards. Each player starts with one mana crystal, and after every turn, the player gains one additional crystal with the maximum being 5. Every player also draws one new card from the top of your deck at the beginning of each round.
There are three types of cards such as “Spell, Weapon, Trap” and they have different rarity depends upon their consuming mana. 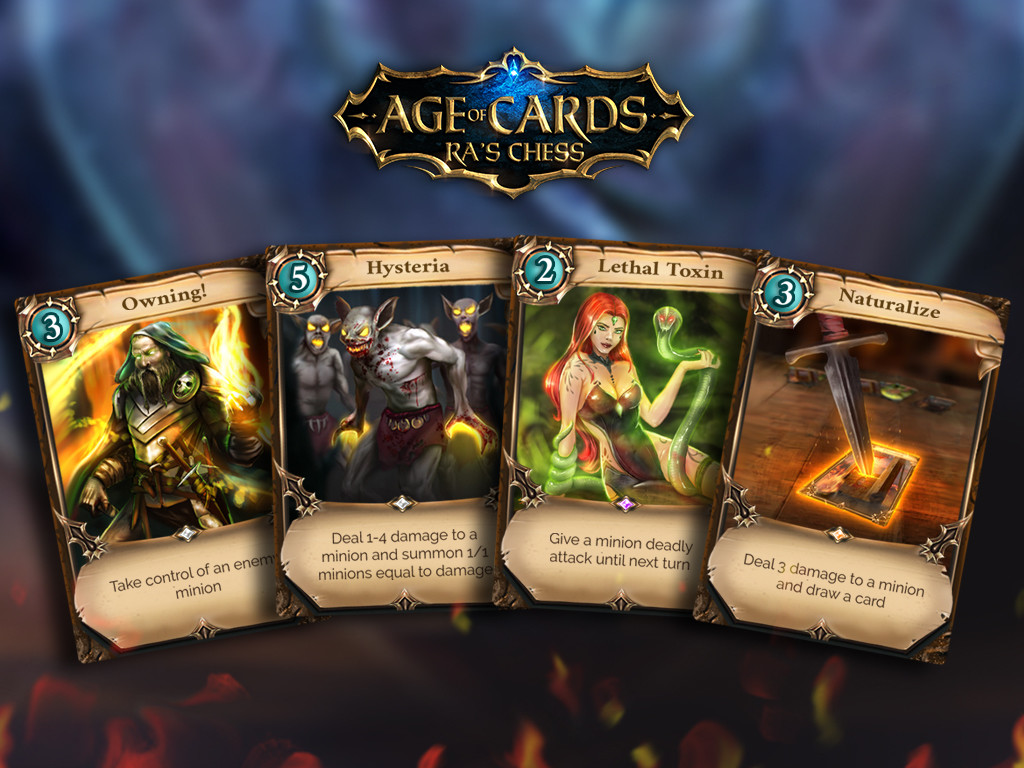 Trap System
Traps help you to hunt your enemy unawares. You can set a trap upon your territory and it triggers when the enemy comes up to the hexagon.
There are 3 available traps for alpha-beta mode.

Lootbox
It’s a game-changer due to the cards which included. Lootbox cards are extra-strong and let you change the fate of the game. So, loot box wars are harsh.

Ra’s Chess is a turn-based chess-card game which is developed by Indie developer NTROY. Such as other examples of the card games, two players face off...