Hello Community! Sorry about the lack of updates, for many of us school is starting and that cuts our time down a lot, plus we are having some restructuring from within the group, but no worry's. we are still going strong! Today I will be showing you the situation of the world in 2070 (around the beginning of the forth tiberium war) 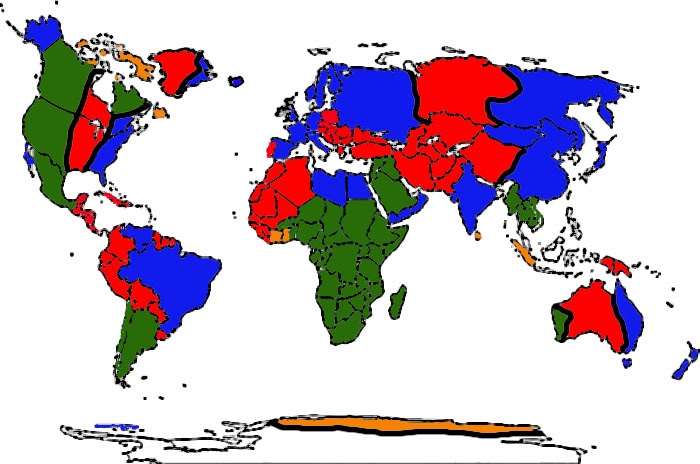 As you can see, Nod and the Forgotten are for the most-part, trapped in whats left of South America, Asia and Africa, While GDI and Idris take the blue zones in Australia, Europe, and North America. 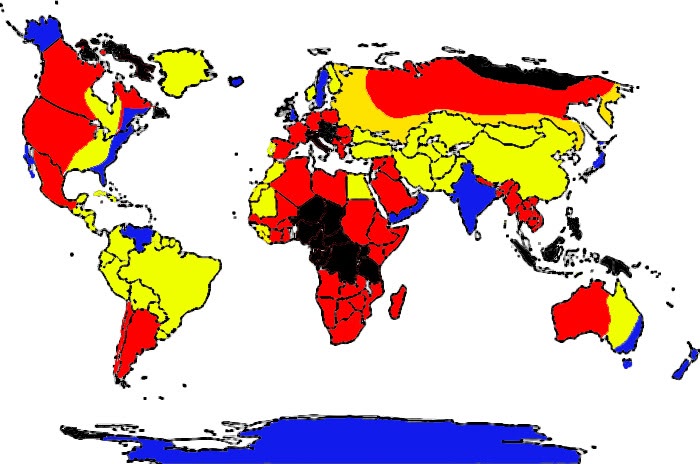 As you can see most of the world is in a yellow zone status, but Africa and lower South America is made up of tiberium infested zones, Yellow zones make up most of North America, Asia, and upper South America, Blue zones don't come up much, only Australia, Japan, India, Alaska, the United Kingdom, and some other small blue zones remain.

If you look at both of the maps you'll see that the Forgotten and Idris are mainly in the red zones and black zones, NOD is mainly in the yellow zones, and GDI has the blue zones.

NOTICE: THE MAP DATA IS NOT FINAL! IT WILL BE EDITED IN THE FUTURE!

Shouldn't Antarctica easily be a black zone, due to the way Tiberium affects water and it's solid and gas forms?

so what is it doing in Russia???

its had a long time to build up?

Wasn't Australia full of Red Zones in Tiberian Wars? And it only had a VERY small blue zone?

There should also be more Red Zones, but none in Canada. Most of the central US (If not simply most of the US, period) should be a Red Zone, same with Europe and Asia.

Also I don't see Idris in any Red Zone on the map, so that info is inaccurate.

Map data will be updated soon

instead of having hole countries in the zone map, why dont u just draw lines of where each zone ends.
Australia was a huge RZ, now, its a huge BZ. WTF? tiberium spreaded, it didnt stop spreading.
Australia and Saudi Arabia have always been Nod's, why did they turn out mutant or GDI?
what is GDI exactly doing in RZs? in TW they said they didnt even try to decontaminate the RZs (apart from some small outposts), why try to do that now, when they have most BZs devastated
India is a BZ under mutant control? either GDI's soldiers got too useless, or its kinda wrong.
Italy is the location of the thresold tower. Nod should have the strongest presence there, while it is now controlled by GDI.
i dont know, GDI has more YZs than BZs, the mutants did with some scrapped forces what Nod couldnt do with a full arsenal (capturing many BZs)
i believe the map should be like this:
YZs: Nod, GDI, Mutants
BZs: GDI (maybe Nod if u want)
RZs: Nod, Idris, Mutants
BlaZs: Idris, Mutants (with the exception of Italy, which should be under Nod)

thats my opnion, use it if u want, or ignore it

So what's the state of the countries coded with the white zone color?

those white zones are inland seas and lakes.

why isn't sarajevo a black zone because of the huge LQ tib explosion :S

Edit: "NOD is mainly in the yellow zones" but i see that they are in a black zone too: south amerika

and where does the scrin life :S

Well...
-Australia should be a red/yellow zone. Remember: with Scrin attack, Sydney was destroyed
-Chile wasn´t a Blue Zone under the control of GDI?
-Muntans on a blue zone? (India)
-With the huge attack on Brazil, it shound be under the control of GDI again? (as I remember, only the Liquid tib bomb was evacuated)
-With the explosion of the tib bomb, Sarajevo should be a black zone.

And try to not limit the map on Territorial zones. For exemple: the wast of USA is a red zone (perhaps a black one now). The same for the North of Brazil.

still, WTF is GDI doing in italy? nod should be guarding it like a dog guards its food.

how come theres red n black zones in the north, tiberium cant grow that fast up there

If this was now it would kinda suck... I'm in a Nod owned yellow zone... the midwest.

According to the lore the west coast of North America(Including Canada) is a blue zone. This map implies that there must have been a catastrophic failure in that area.

If you're going by the picture of the bridge in the background of the C&C 3 menu, the Golden Gate isn't the only suspension bridge in the world.

it looks a lot better

Cnclabs.com
World map overlay of red, yellow, and blue zones based on the globe shown at the beginning of C&C3. I'm not saying red and yellow zones shouldn't have progressed, but there are some things on that map that are just way too drastically different.
Especially Madagascar, that country has insane quarantine policy which I think would show, and according to this map, it does.

Around the beginning of 4th Tib War you say. So are TCN hubs experimental, then?

A question of curiosity. Will there be campaign version of this mod in future?