We took a lot of references from H. R. Giger and Beksinski and then we came up with an initial look, and then we began to work from there.

As you know, this game has gone through some look and feel iterations, and the story was no different for the suit. If you see this feature, you can see that our first idea was to go after some sort of Tron look (BTW the story concept was very different than it is now). We slowly changed it to a more monster-type story. This change meant the outfit had to change too, although the basic "catsuit" type of suit remains the same.

Our first concept was a black suit with some glowing lines. You can sorta see that in the concept design shown above. The white lines were supposed to be the ones glowing, and the entire "technology" of the suit was supposed to be "holographic" meaning that all add-on parts would be light holograms added on top of the suit.

The girl working on the design didn't quite like it, so she came up with a more "modern" looking style of lines, with hard edges and all that. The basic idea was the same, but now we replaced the full black with some black and blue tone.

We then thought about something. If you take a look at the sci-fi games, a lot of them look pretty much the same on an architectural level. I mean, they all have their own "look" but architecture in Dead Space is not that different from architecture in Mass Effect or even Routine. We went back to the drawing board and we began to really think about this a little bit more. After a little bit we came up with the idea of making it more "weird-alien-looking." The thing is there's no reason to think futuristic architecture could only go in the Dead Space-looking direction, so we thought about making it more organic-looking.

Then we came up with this look: 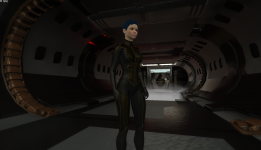 It looked pretty cool, but there was a small issue. A lot of the game will take place in the dark, so we would get the "floating head" effect because the suit was so dark it was not seen at all.

Then we came up with this other one: 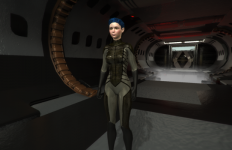 This one works a lot better in dark areas, since you can at least see some of it. We kept the basic shape of the lines, but the entire suit is very different. What's nice is that it has a lot of different details. For example, if you look at the legs...

And another view (the super hero microdetails have been removed, though)

BTW we plan to run a crowdfunding campaign soon but not-so-soon, so pay attention to that. But first we want to finish a small demo so you can really see what we're doing. Besides, having a playable build is like a million times better than showing a lot of screenshots.

See you on Friday!