Post feature RSS The Secret History of the Maori

The Maori haven't received as much contemporary research as a lot of our other civilizations, which meant the team had to use a lot of first- and second-hand sources. It also means that not many people know about the history of this civilization, and we noticed some fans don't even believe these units existed! So to show off our team's extensive research - and educate the public about the secret history of New Zealand - we'll be doing research showcases on many of the Maori units!

Posted by DayoftheNinja on Feb 6th, 2020

Unlike many western civilizations, the Maori haven't received nearly as much research from contemporary historians. Because of this, the team had to do some deep digging through first- and second-hand accounts to find usable units to fill non-infantry roles. Maori history seems to be so obscure that many of our fans didn't even believe these units existed! Because of that, we wanted to take this Waitangi Day to share the process we took to find some of the Maori's units and the history behind those units.

When the team realized we needed more siege units to fill out the Maori roster, Will helped set me on my way with a vague description of Maori siege teams that pulled down pā walls using a rope and bar. Armed with these details, I reviewed the sources we had found so far and did some deep searches until I found what I needed - a name.

Using this name and more descriptions from the book (The Pa Maori (1927), by Elsdon Best), I was able to uncover numerous other sources. It appeared that, when besieging an enemy fortress, the Maori would tie rope to a bar or plank and throw it over the wall, after which a team of sappers would pull together to bring the wall down. Because of the simplicity and availability of this method, the rou was prolific as a siege weapon among the Maori. 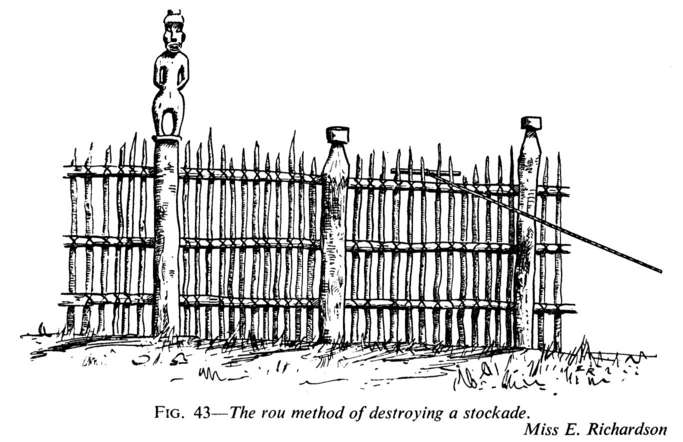 The unit has been complex to recreate, as Age of Empires III doesn't offer many models or animations that fit this style of fighting. Luckily, that job fell to better modelers than myself, and our team member Forsant was able to put together a workable facsimile. Because the unit is so simple and widespread, we decided to make it shared across the Polynesian culture and gave it a more generic name to accommodate other civilizations. Without any further ado, the Grapnel Team: 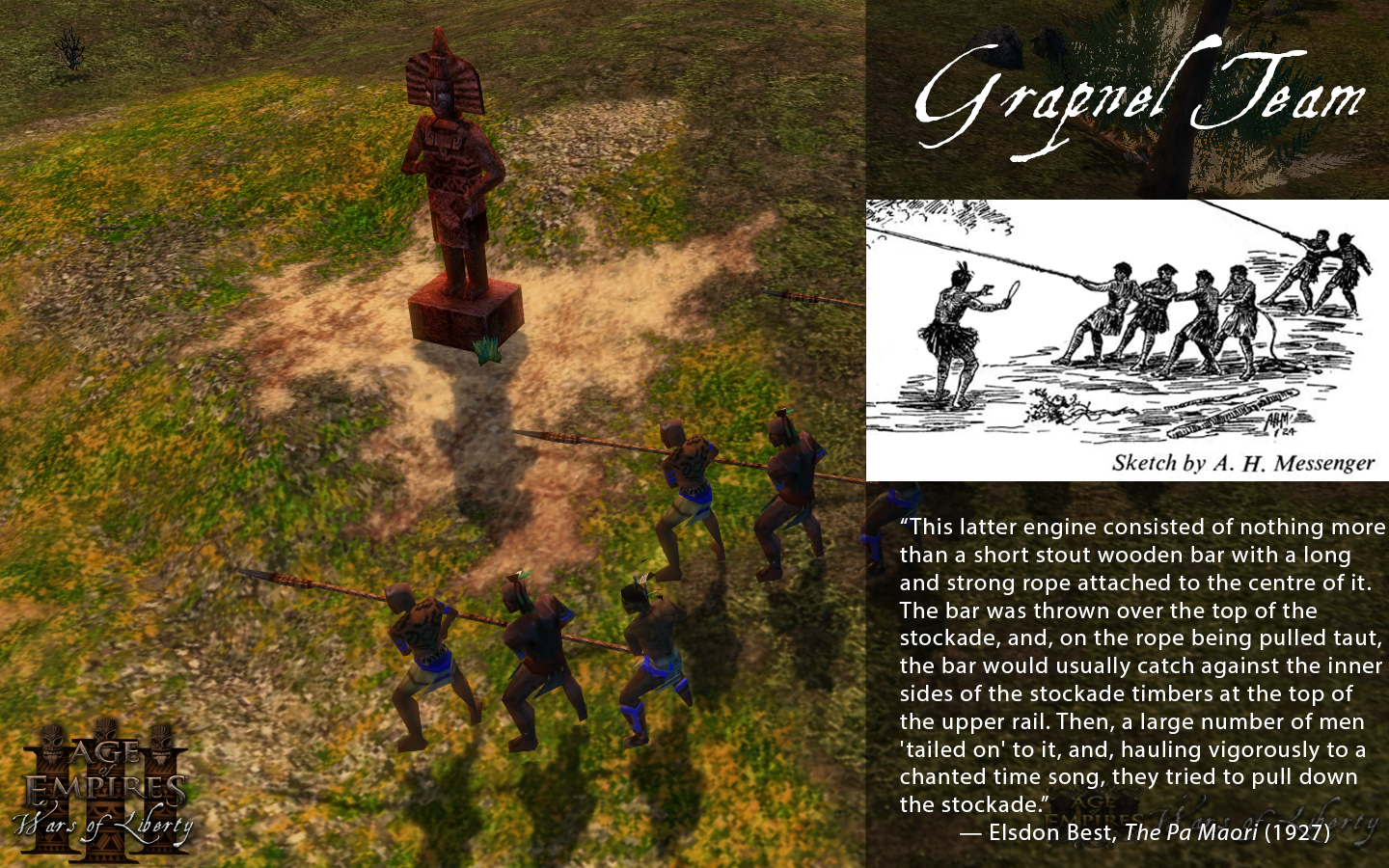 Another hint I received when I began my research came from Hoop Thrower, who said he had a source that Maori had used battering rams and even ballistae for felling large trees. It didn't take long to corroborate his source, and I was able to find a few authors who had written about these tools. Finding image references for the unit took quite a bit more digging. 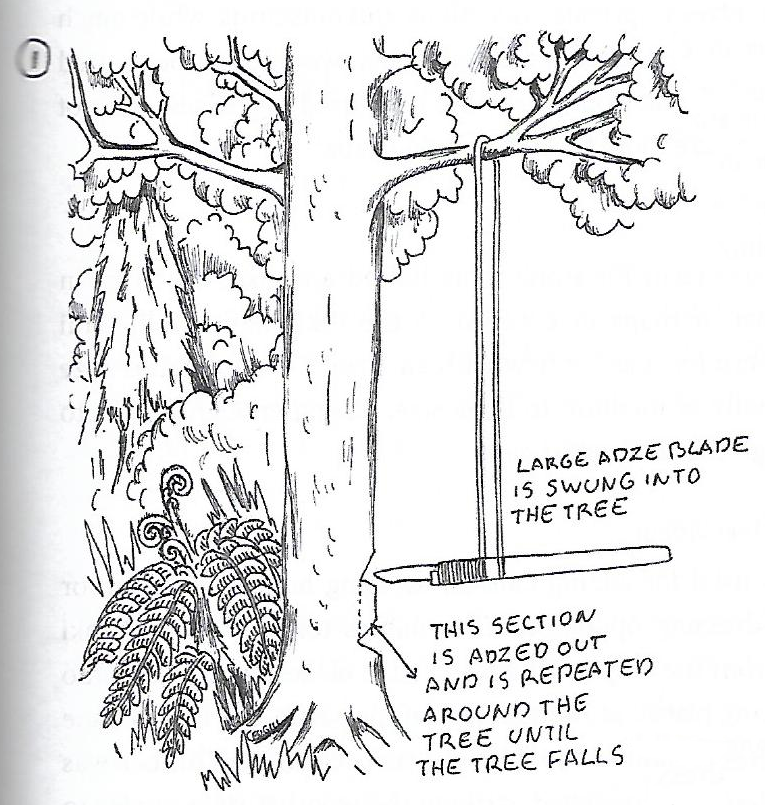 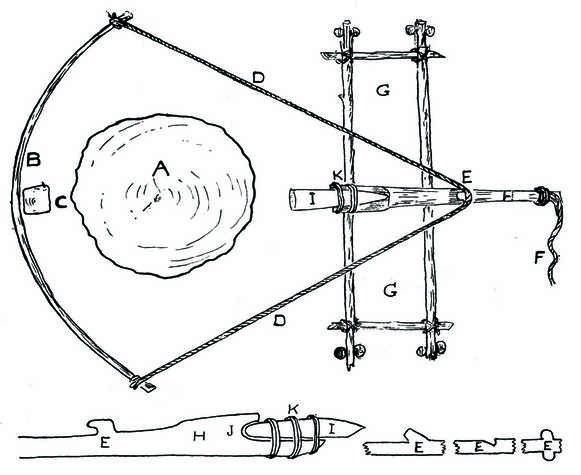 Although one modern author had reproduced drawings of the ram and ballista, none seemed to have first-hand descriptions or drawings. It took a considerably deeper dive through Google Books and the myriad of available free texts from various New Zealand government and educational websites, but I was eventually able to compile a handful of detailed illustrations to help our modelers and texturers (Forsant and Fenriz) to recreate them faithfully. The ram's drawing is gorgeous: 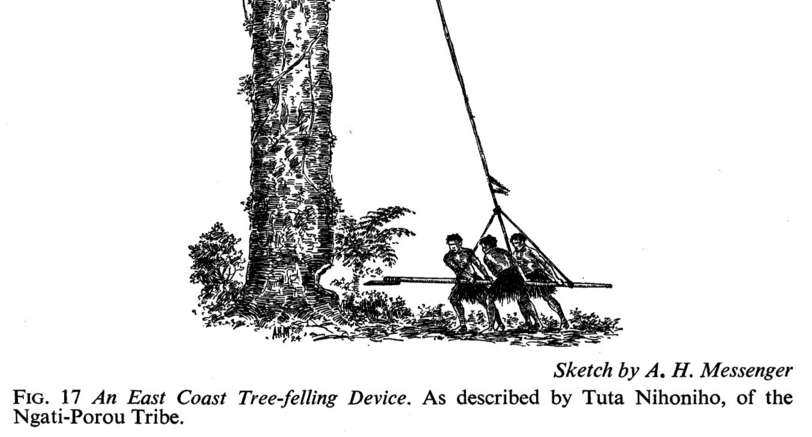 Continue reading to see the Ballista's drawing in our research showcase below! Some of the early descriptions of the Maori Ballista were almost fantastical, with its first witness describing it as a "Roman balista." While it was noted that the Maori did not use bows in combat, and the tool's primary use was in harvesting lumber, it is part of our job as game designers to ask "What if?" and in this case the idea of a tree-felling ballista that fires bolts carrying axe-heads was too cool to pass up. So what did our designers come up with? Take a look! 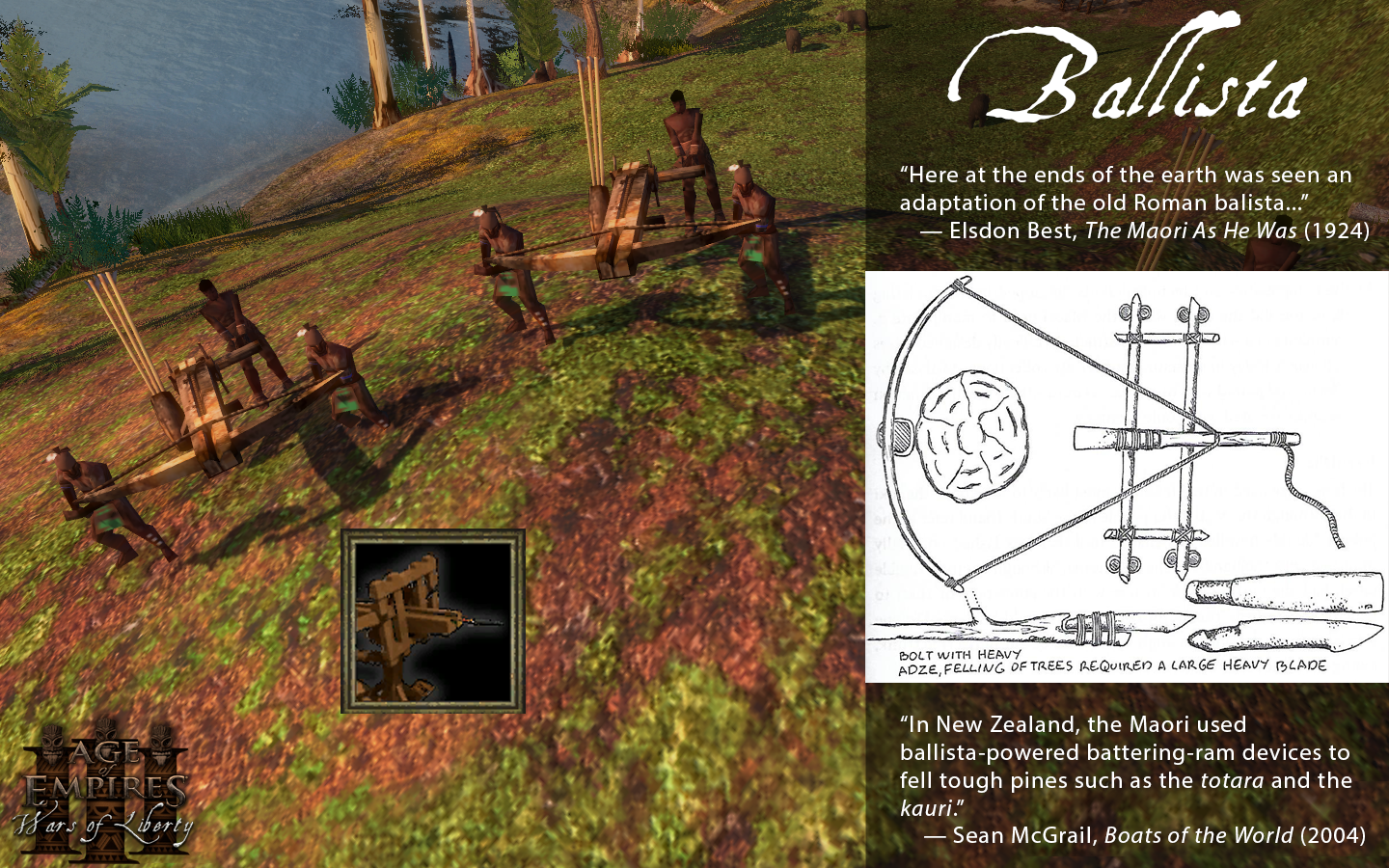 Slings of All Sizes

While the Maori do have access to some advanced weaponry - even more so than the Ballista - they still needed a generic weapon to be shared with other Polynesians. And while they had no wartime knowledge of the bow and arrow, the Maori made extensive use of the sling. Commonly used for throwing javelins in a style similar to the South American atlatl (which can be seen on the recently revealed Whip Spearman), there are a handful of accounts mentioning sieges being carried out by building platforms called kopani from which to sling stones - often red-hot - into an enemy pā to destroy its buildings. While many sources mentioned these events offhand, finding the original accounts took possibly the most searching of any source in this process, but I was eventually rewarded with multiple firsthand accounts. The sources are so heavily 19th century that you can really taste the racism.

In besieging fortifications New Zealanders held that wisdom was better than weapons of war, and never attempted open assaults. Occasionally red-hot stones were thrown from slings, in the hope of setting pas on fire, and advances were made close up to the walls by underground approaches, or by parties protected from the enemies' spears by shields of flax and reeds.

Ignorant of the bow-and-arrow and the boomerang, the Maoris knew and used the sling. With it red-hot stones would be hurled over the palisades, among the rush-thatched huts of an assaulted village, a stratagem all the more difficult to cope with as Maori pas seldom contained wells or springs of water. The courage and cunning developed in the almost incessant tribal feuds were extraordinary. Competent observers thought the Maoris of two generations ago the most warlike and ferocious race on earth. Though not seldom guilty of wild cruelty to enemies, they did not make a business of cold-blooded torture after the devilish fashion of the North American Indians.

Regrettably, while we had many illustrations of the infantry form of the weapon, the only extant illustration of the larger sling was a simple version used in a kids' game: 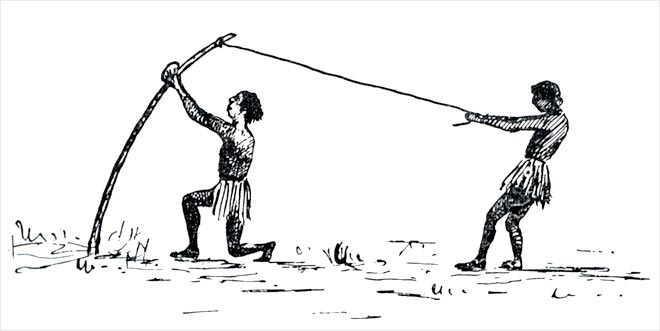 Still, the general idea was clear. Sadly, animating a sling-catapult is a significant task, and instead the team decided to use some artistic license to create a more standard catapult. Give it a look, along with two more firsthand sources! 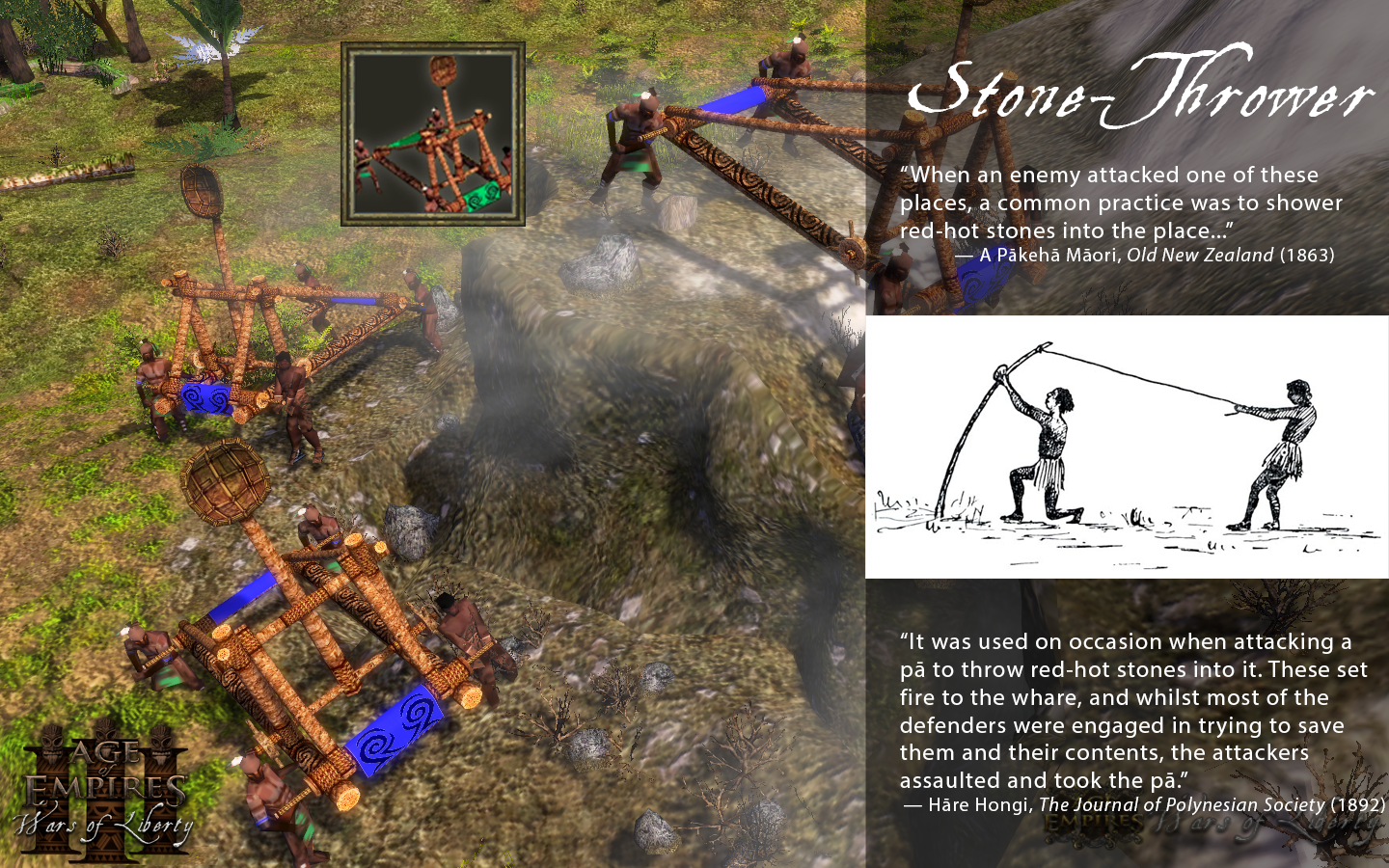 For those that made it this far - thanks for reading! Between releases, the team is always putting in an immeasurable amount of resources trying to find the most accurate primary sources to make sure we depict the corners of history that many games and even history texts miss, so we hope you enjoyed the read and we can't wait to let you all get your hands on this exciting new civilization! If you want to do any research of your own, just check our sources below for more info. Happy WoLing!

Ballista
The Stone Implements of the Maori (1912), Elsdon Best
The Maori as He Was: A Brief Account of Maori Life as it was in Pre-European Days (1924), Elsdon Best
Boats of the World: From the Stone Age to Medieval Times (2001), Sean McGrail

Does the bar appear visible at the end of the pool for the grapnel team? Would be a nice visual to back up the history.

This looks awesome! Keep up the good work WoL team!

This is impressive work put into researching these units,makes me wonder if you even have professional historians on your team.

One thing though, are the ballistas meant to be this refined? They look as if they were made out of cut planks whereas the catapult looks like it's made out of palm trees.

Hey! Indeed, we have professional historians in WoL Team, and in general we're all history lovers.

About the ballista is cuz were a bit easier to work with animations. Cheers!

I'm sorry but this is so exagerated. AOE 2 did give catapults to natives, but AOE 3 was more historically accurate. Why so much research if you are gonna add a catapult straight away??

"animating a sling-catapult is a significant task"

Ok. Wasn't it easier to make a slinger with the mazehualtin animation but giving more range and siege damage to the unit???? Dude, come on.

And the ballistae... Well. Just scrap it. The Aztecs only have their infantry for siege. Why would yo look for so many siege stuff for some native civ. Nice try, ofc, but you crossed the line. Just use tree-felling device as light rams and get yourselves some real slingers.

I am most impressed with this research. I blundered across this page through a Google search, and I will admit I did not have high hopes. I can assure your readers that you have accurately shown my peoples' technology. I'm not sure why Mr RevanShan is being rude to you, but each item you described is accurate. I teach the architecture and engineering of Maori and each of the structures you describe were used. My ancestors built massive hill forts called Pa, creating the need for siege technology and defensive mechanisms, all without metals of any kind. The remnant fortifications remain on the landscapes, most especially on the volcanic mountains of the Auckland region.
So well done, folks: keep up the good work!