To mark the release of our fifth and final piece of character artwork, we're going to take you through the development of Buckthorn from the initial concept drawings to importing him into Unity.

As we've mentioned before, one of the great things that lifts Seed Pod Shuffle above the usual match 3 suspects is the persistent 3D enivronment, and the coolest thing about the environment must surely be the animated creatures. But before these creatures get to strut their stuff, they have to go through a lengthy design and development process, and things don't always go to plan. To mark the release of our fifth and final piece of character artwork, we're going to take you through the development of Buckthorn from beginning to end, starting with the initial concept drawings. 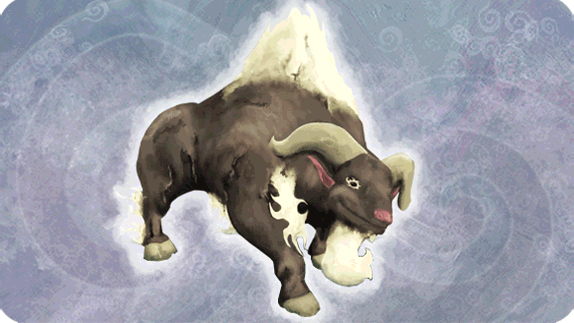 Very early on in the development of Seed Pod Shuffle, we decided it would be fun to have a large, burly, angry creature that could chase little Jasmine around. From our market research, we also knew that all of our creature designs had to fulfil certain criteria in order to appeal to our primary audience (35-50 year old females), or at least to avoid alienating them. So for example, we knew that we could stylize our creature characters to a certain extent, but they still had to be largely based on some real-world equivalent. Another important point we discovered was that the creatures had to be fairly cute, playful and cheerful; even creatures with implicitly scary, weird or mean behaviour still had to look cute. With these points in mind, we began creating concept images for what at that time we were simply calling 'The Enraged Creature'. In the image below, you can see just a small selection of the looks we tried out. 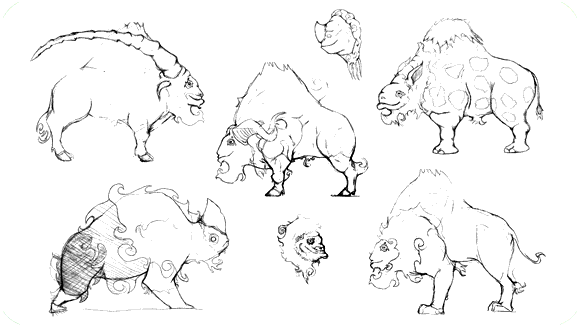 While we liked various elements of all these designs, some of them failed the criteria we had set for ourselves based on our market research. The creature on the top-right, for example, has a head that is just a little too unlike anthing found in nature, and might be offputting for our core audience. Others we rejected for purely aesthetic reasons, before we finally settled on the design you can see in the middle.

Once the design was finalised, we began building the Enraged Creature as a 3D mesh. He was by far the most enjoyable creature to model, due to his bulky, muscular form and his relative lack of complicated details. We were very conscious that the polygon count had to be kept as low as possible to minimize processing requirements, whilst also allowing for smooth and satisfying animations. Since the mesh was never intended to be viewed up-close, a poly count of just under 2000 seemed appropriate. 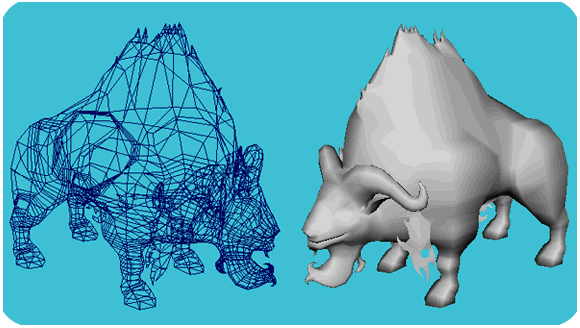 Once the mesh was complete, the work of animating and texturing the character could begin. Conveniently, both of these tasks can be performed in parallel (assuming you have more than one person in your team), which cuts down on development time. For the purposes of Seed Pod Shuffle, only a small number of animations would be required, to represent the various 'states' that the characters can exist in - walking, running, eating, idle and 'action'. The first four are faily self-explanatory. 'Action' represents the animation a creature performs when its special ability is activated. 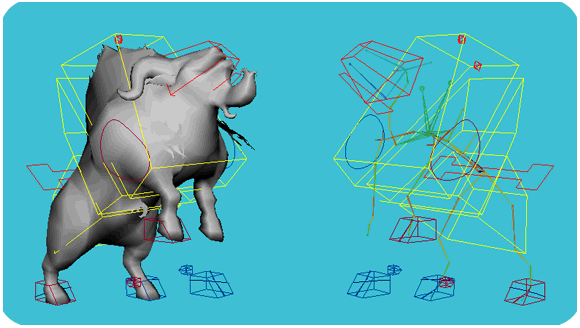 In order to give the animator a good level pf control over the creature's movements, a relatively complex rig had to be created - obviously nowhere near as complex as anything used by Pixar, but complex nonetheless. Crucially, we had to be sure that each animation would import correctly into Unity, and various tweaks and workarounds had to be performed to get the creature moving correctly in the engine. Check out our Animal Asylum video for an amusing taste of some of the problems we encountered.

Texturing, which some people call 'skinning', begins with the often tedious and frustrating process of UV mapping, which allows the surface of a 3D mesh to be represented as a collection of 2-dimensional components. These 2D components are arranged in an image file which we then texture using digital painting software. Just before we began UV mapping the Enraged Creature, we were lucky enough to have a piece of software called RoadKill recommended to us, which drastically cuts down time spent UV mapping, is easy to use and, best of all, it's free! We really can't recommend this software highly enough. 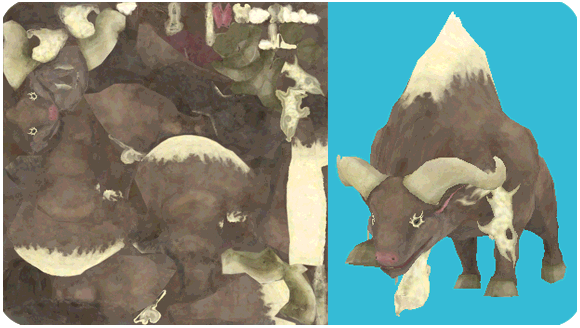 Texturing the Enraged Creature involved picking colours from a carefully established palette and applying them with a custom brush, designed to replicate the effect of a watercolour painting. Again, our market research (which consisted of many long hours harrassing people in the street for their opinions!) indicated that a watercolour aesthetic would resonate well with the audience we expect a match 3 game like Seed Pod Shuffle to attract. While we haven't captured this aesthetic perfectly, we're satisfied that we've done a reasonably good job. As the texture was never intended to be viewed up close, we quickly discovered that too much detail could be hard to read from a distance, so the Enraaged Creature is defined by large and distinctive blocks of colour.

Now we're able to see the fruit of our labour in the context he was always intended for - Seed Pod Shuffle's persistent environment. But the Enraged Creature, who has recently been officially named Buckthorn, still has one element of his development remaining. The relatively simple artificial intelligence that will allow him to go about his activities in the game remains to be completed. When this is done, his journey from concept to creature will finally be complete. 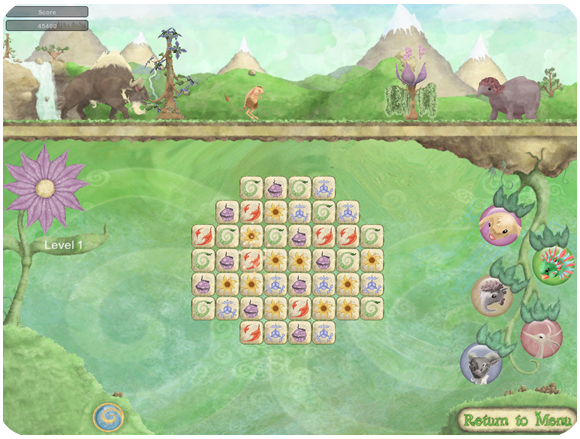 Very cool to see it all come together in the game screen. Thanks for sharing. :)

awesome work!
well since its 2D game, why don't you cut the guy in half and save some poly's? i am not good with 2D, so i am just asking :)

Then you would have half the legs!
Also, I presume on the off chance you think "Hey, I want to show him from a different angle" you can easily do it.

It may also be more difficult to model only half as we're so used to seeing whole animals.

It's an interesting idea that we hadn't really considered, but since we will actually be showing the characters from all angles it's not applicable in this case. Check out this article to see what I mean:

The game looks interesting, will keep an eye out for this.
Nice article too :)