Beware ye faint of heart, the dark words of Sotha are about to befall you. A frightful interview with a master of game-play and suspense! 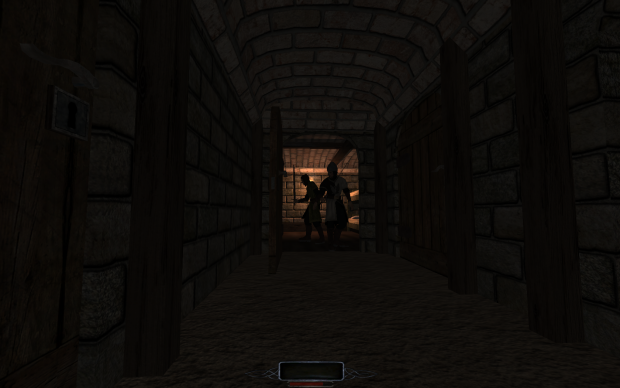 We at The Dark Mod are fortunate to have yet another mission making machine, Sotha. Edging ahead of Bikerdude's three missions by a portion of the mission "The Alchemist" (the other portion was completed by Fidcal), Sotha has shown that small to medium sized maps can be created in short order with exquisite design and game-play. Indeed, if Bikerdude is one of our masters of building beautiful architecture then Sotha is a master of the mechanics of sneaking. He knows exactly where to place AI patrols and loot to conjure a palpable and electrifying sense of suspense (and occasionally... pure horror...).


Was The Dark Mod your first mapping experience?

When I was young I tried a couple of revolutionary games called "Wolfenstein 3d" and "Doom 1". I liked the 3d style, it felt very immersive. I wanted to create my own locations so I made a few simple maps for Wolf3d and Doom1.

The second time I was compelled to do mapping was Half-Life 1. The engine had so much more potential compared with the two mentioned above, so I played around with the HL map editor, too.

But these maps were created for my own amusement and I never released any of them.


What gaming experiences, if any, inspire your mission designs?

I've played a lot of games in my life and it is difficult to pinpoint any single source of inspiration. People claim that my maps have really good gameplay-value and I think that comes from my versatile gaming experience. I know what is most-probably fun and what is not. The basic mapping question I keep asking myself when building a location is: "If I didn't know what was coming, would this be fun/interesting?"

Mission design itself typically comes on its own during mapping sessions. Before mapping, I think "What kind of place would be a fun to loot". Then I find a few images on the net and try to create something like that. The internet is full of images of medieval manors, towers, castles and floorplans. Nowadays I've got the habit of taking photos of old buildings with my cell phone so I can try to recreate those in the virtual world.

"The Alchemist" was your first attempt at a Dark Mod mission which Fidcal took over and revised. Did that mission have any significant place in your Thomas Porter series before it became part of the Thief's Den series? Is "The Beleaguered Fence" your reboot of that mission or might you someday revisit the idea that sparked The Alchemist and build another version?


The Alchemist was sort of a training ground for TDM mapping. First I challenged myself with creating an inn, then some streets around it, then sewers below it, etc... The mission geometry is a design catastrophe in the sense that there is absolutely no long-term planning there. It was just 'barfed' into existence in a very chaotic manner.

The mapping effort was terminated when my motherboard broke down and I was without a TDM worthy computer for a long while. I want to thank Fidcal, who came over and skillfully converted the map into a playable FM, thus saving the work from going to waste.

The Thomas Porter series was created once I got a new computer and was able to start from a fresh table. Now I know how to map, and I plan my efforts. I also like to stick to a single location instead of making streets+mansion+sewers. It's better to select one location and do that well. And planning the map "well in advance" saves a lot of trouble.

You have such a methodical way of planning, constructing and releasing missions. Is it hard for you to keep on track and not get carried away obsessing and expanding your missions?


With The Alchemist I did make the mistake of getting carried away and that was overwhelming. From this experience I learned my current concise methodology.

Mapping is so much easier when you have a solid plan. Sometimes you get nice ideas during mapping and can either implement the idea in the current one or write it down in an archive of ideas (and then use it later). Usually, the idea can be implemented if it does not require total mission plan overhaul.

"The Glenham Tower" was one of the scariest experiences I have ever had playing a video game, period. Do you have any advice for your peers about creating an atmosphere of dread and fear, or is it just a natural gift like singing with soulful emotion?


Heh.. The Glenham Tower mapping concept was simply "A derelict tower with an undead infestation." I didn't have any particular aim of making it very scary, I just wanted to have some good sneaking in an interesting location. It appears that with a little luck, all the pieces fell in the right places.

One of my hobbies is Game Mastering a tabletop role playing game with my buddies and for some reason I really love horror themes. I also love horror literature. Maybe it came from there?

If I have to give a tip to fellow mappers I think that the horror genre is really dependent on sound. Place your speakers well and choose some good sound effects.

You have stated that your attention to visuals is pretty conservative so that you can retain enough performance to populate your missions with plenty of AI. Would you entertain the notion of bending this rule a little and working with another more visual mapper for a combined experience that is a little more compromised between these extremes? (Or make your own more visual mission to test your own limits?)


Yes, AI are the most important game-play elements in the sneaking genre. I find it important to design locations so that AI can work their magic. I also rank game-play as more important than graphics.

Making an immensely beautiful and large area scene requires a lot of polygons, and it will truly be a shame if the area cannot performance-wise accommodate enough AI to make things interesting. It will be beautiful but boring.

Also I must admit that I am too easily bored when working in certain areas. I simply lack the interest to polish a single location until it is perfect. I like to create simple, but working scenes and then move on.

Therefore it feels uninteresting for me to create mission with grand visuals. Grand playability is an entirely different thing.

I have no idea how collaboration with a fellow mapper would work in practice: you know, "two artists creating one painting". It might result in arguments about how to implement things, I'm afraid.

You have such a great mind for the occult and often pepper the forums with jokes about witchcraft and sorcery, what are some of your favorite books and movies about the topic?


I am not aware of any interesting movies of the occult and witchcraft, but I am a big fan of HP Lovecraft. I am pretty sure people familiar with his works can find some fun little details in my maps...

Will playing any of your missions taint our souls and lead us down the path of darkness?


But of course! There are sinister traits in each and every one of us. That is the reason why insanity and occultist content strikes such a special note in us: it is forbidden yet still enticingly fascinating, beyond science and reason.

Thank you Sotha, I heading am out to "The Knighton Manor" for an evening affair...

it was enjoying to read it.

thanks for the interview.

Interesting Read this was, thank you! :-)