From the continuation of "Why call it the Grand Release?", news article 2012, a substantial critical event must be published such as this.

Should we even call the next release the Grand Release?

From the continuation of "Why call it the Grand Release?", news article 2012, the so called name, "The Grand Release" successfully maintained its name for the time being. With a total vote of eighteen, against six, the next release of the UA (Ultimate Apocalypse) mod will be formally (yet unofficial until the deadline has been reached) announced as the Grand Release. Many leagues of UA fans and visitors of the UA mod gave feedback with hastened reply and effort to join the debate, but there is still time for more debates to come. Most people agree, "You could call it the "Grand Release of 2012." It would fit considering the trailers say 2012 on them. They DON'T say that's the FINAL release of the mod, do they?", and another said, "UA Grand Release may not be entirely finish. I understand Lord_Doofus may need to move on which is acceptable. Perhaps there can be some alternatives after UA-GR." - From directly the source of the mod db article.

Disagreements were said in direct response just moments after the publication of the news on RelicNews Forums, "the Grand Release shouldn't contain patches", in quick reply by Sataman. Hopefully to spread word faster to rename the Grand Release to something else, one other agrees with Sataman, and the name change was in favor, but unfortunately interrupted! The word spread lightly as fans of the UA mod talk about something different. Fortunately in this case, no support was for the name of "Grand Release". Who knows how things would've turned out if things were done differently. Some others agree with the name change of Grand Release as well on Mod db. They are not strong cases, but some others are nodding heads with these comments via the "karma" function implemented by Mod Db's web base design.

Overall the debate was recognized as a weak but maintained and controlled fight. No pointing fingers or shout outs were heard throughout this debate for now. As expected, there was a debate with some disagreements, but as of right now, the majority of the vote stands with the Grand Release being known for the next release. But when exactly is the next release, December?

The deadline to vote for the name change ends the week of the release upon scheduled, but the question remains, when is the release? Lord_Doofus, also known as Cylarne in RelicNews has discovered that there are some people who thinks that the release should be delayed until completely finished. Some think the release should be finished at a decent quality, but most likely unfinished and go as planned. This here is the big turn of events, should the UA team release the mod in 2013 when it is 100% ready for release and completely ready? Or should the UA team release the mod when it is most likely ready, but playable NOW in this year of 2012? The turn of events may begin in a few days. 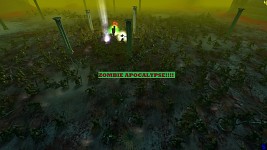 I really think it should be released in 2012. Any unfinished areas can be polished off afterwards with a patch.
As for the name, well the game is going to be epic either way so I'm not too fussed. You could stick with "Grand Release" and release a "Grand Patch" in 2013.

The concept of a finished product not requiring patches is ridiculous. Finished, consumer products even require patches; vanilla Soulstorm required patches from Relic. It is simply too presumptuous to state that a game is finally bug-free. I don't understand the logic of that point.

Agree. As PsykoTenshi said:
"Absolute perfection is not exactly within human capabilities"
When UA mod fans will have this mod they will tell some bugs, what is wrong, or what can be improved.
In my opinion it should be realesed this year.

waz up! i agree with soulstormfan comment with more people we gonna be playing and testing and reporting back till our hands are numb. and for the name grand release is cool and the next one you can call patch or grand release ultimate

You can release the work you have now and then patch it later. With the patches you don't only fix bugs but add new features as well.

it´s no shame to release something what needs to be patched later. I mean, even great games like TES V:Skyrim or above mentioned DaW:SS have patches...

True skyrim gets official and unofficial patches, and even now it has few bugs. But imagine if we had to wait for it to be perfectly bug free.

Juts release it when you think it is complete, if you just want to add few more units or fix few bugs you could do that in grand patch, or expansion. By doing that you could even add more units to the game later on.

I'd say that the "GRAND RELEASE OF 2012" should happen somewhere during 2012, I'd also say that the devs should make some easy form of bug-report function where you type "Of what nature is the bug?" (to get priority), "What happened?" "How many times did it happen?". That would make things easier for us all.
I don't think a "Grand patch" is a good idea, first it will be Grand Patch 1.0, then 1.0.100, then 1.0.105 etc. There should just be tiny, tiny patches that fixes things at a time, otherwise the patch would be complete/the game bugfree in 2014 since the devs would choke on un-tested code from not have enough testers.

New news will be posted. The next release will be named the Grand Release of 2012.