Post feature RSS Should we even call it the Grand Release?

Debate in action! Lord Doofus's and teams' thoughts of "legit Grand Release formatting." What is the Grand Release, and what are the standards of a true "Grand Release?"

Should we even call the next release the Grand Release?

Behind the scenes of the Ultimate Apocalypse team, a new and improved version of the mod also known as the "alpha internal version" was designed to procreate a new Apocalypse feel compared to the beta versions of the mod as we all know and have played today. Master overlord (team leader) "Lord_Doofus" on Mod db, also known as "Cylarne" in some other places throughout the net, just realized that the bulk of the final title "Grand Release" may or may not be appropriate for what has been planned. Mod db members have stated in some areas throughout the network, "in complete honesty, i would rather wait for everything to be finished properly before a grand release, don't rush yourselves guys, quality over quantity!", but yet some believe that this is the moment of all time for the Ultimate Apocalypse mod for Dawn of War Soul-Storm, results may vary. 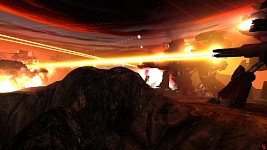 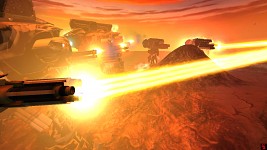 On July 11th, 2012, a news was broadcasted on Mod DB and RelicNews related to the Ultimate Apocalypse mod's progress regarding "November News"; the taste of what's about to come. But as the news was heard, this was heard as well, "In other news, sadly, I would announce on the other hand that the top secret project we were working on in order to be completed in the Grand Release will not be completed as we are running out of time. This new secret project is a well developed hit that will get most everyone's attention, but it is definite that we will not have time to finish it..." (Lord_Doofus).

The Grand Release is another term for "completion of the mod", "the myth to not be discussed about", and "Cylarne's retire", stated back in August throughout the second delay of the "Grand Release." Results like this may prove the next release title of the Apocalypse mod otherwise. So is this the "Grand Release" we all hope to see and witness? Or is this just the internal alpha at its best? The debate begins, does the December Release (if any) really intend to live up to its name? Many of you may cross your fingers. This is the fact as well, "the Grand Release shouldn't have to require patches" - Lord_Doofus.

The final release as we know may not be the final release at all, perhaps just a continuation of what is to come? Something this special requires a lot of hard work, and even though achieved to a high degree, it is still not finished. Some fans think that the whole Grand Release may not be truly finished. Instead, it is a "super version", or a "new version." Alpha internal tester and adviser of the UA (Ultimate Apocalypse) team, Gambit also brings up some good points to relate to for this release, "Finish skirmish and get done with it!!!!", said on Skype to Lord_Doofus's contact not a while back. He also recommends to "Leave the burden to us and finish the mod another time!!!!" Such indications may result in an intentionally unfinished mod to ease up in the real life. But who knows, maybe this is the plan to make people play more over time, than all at once?

The supportive facts on the other hand may bring up interesting points. January 2nd, 2012, a first internal trailer has been documented globally throughout the Ultimate Apocalypse mod's history. The trailer, created by Tyrantarmy6, the team member of the UA mod team has made a substantial effort which brought great popularity to some degree of the entire mod. Hundreds or thousands of fans looked at it and was for certain, "this is the Grand Release!" Reported to be released in 2012 at the end of the film, another rather "beta", of the mod was released to pay off respects to the UA mod's donators just like the trailer. The beta did not include Grand Release features which brought confusion to the players and fans of the UA mod, but it was no Grand Release either. What does it take for the UA mod to be finally deemed the title of "Grand Release"? The answer to this question is throwing everything they got at the crowd, make this release memorable; "make the fans go wild." And so the team leader says, "save everything for the finale."

Here is the trailer that was being talked about: Moddb.com

And finally in other (sad) supportive facts, Lord_Doofus a while back mentioned loud and clear to the audience of this mod, that upon the Grand Release, Lord_Doofus is ready to retire, move on from this mod and make his very own game for the coming future. The reason for this was, that because of being limited by the engine of the DOW (Dawn of War) game, Lord_Doofus has explored it all in DOW, and cannot achieve any more than what he has accomplished. Of course he has promised to stick around the community and make any needed patches if there were any donations. Lord_Doofus has made himself clear too, that if the alpha internal was to be released, it might as well be the "Grand Release".

So can the December release actually be final release? You know what the Alpha internal mod is, and you now know what the Grand Release is all about, get into the debate! 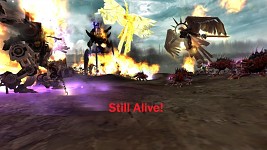 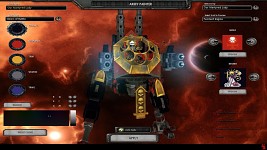 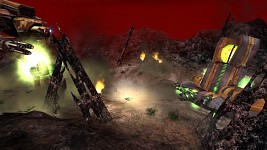 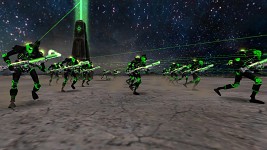 I agree with fans, UA Grand Release may not be entirely finish. I understand Lord_Doofus may need to move on which is acceptable. Perhaps there can be some alternatives after UA-GR.
I have a 50% knowing feeling about the secret project but I won't spoil it(no body told me) but somebody gave a small hint before(unintencionally), and I think fans should also keep their fingers cross on this one to see it release.
I read about August 2013, if so there's still sometime for progress and support, I could say more on the debate, Let see what else fans can say!:)

The super top secret thing would happen to be the Warlord Titan right?

i think it would be the EMPEROR!! Titan :P

Why so small things, I call Emperor Class Battleship or Death Star!

Either call it
1. V. xx numbers or something else
2. wait until everything is done (That would be long time)
3. call it "Lord_Doofus's Grand Release! (This is the part where someone retires for estimated time, though that time varies from hours to months or even years.)"

You could call it the "Grand Release of 2012." It would fit considering the trailers say 2012 on them. They DON'T say that's the FINAL release of the mod, do they? It's like a developer releasing a game, then adding new stuff later on. You know, like Relic did with Dawn of War and it's expansion packs.

In my experience, regarding software there is no such thing as a "final" version. Absolute perfection is not exactly within human capabilities, and certainly not within M$ Windows, so there's ALWAYS something else that can be improved.

I think there should be a poll for people to decide if they want:
-An earlier release (which would be missing some features, but still be a gigantic improvement over the public UA build), plus a patch to be released a few months later with the remaining features when said features are done.
-Or a full, 100% complete release which would take longer (won't be a 2012 release) but will include all the features originally planned.

I would personally vote for an earlier release. I wouldn't mind some features missing for the moment as I'd be too excited by all the things that are in there. It doesn't have to be perfect the first time, after all. It can always be updated later.

Excellent. Consider it done then. I'll post these polls, and I will reign over no votes.