So there’s this character in my game named Billy. He’s a really pathetic and annoying guy that’s put in charge of being the main character’s mentor.

Recently, I finished writing all the dialogue for Billy and the rest of the game. It was a nice little triumph. Immediately, I sent the script off to Kyle Chrise, the voice actor cast to play Billy.

And not that much time passed, but it felt like forever. I was eager to hear what Kyle would create. And there’s this stupid thing that when I’m obsessed with my own creative project, I get sensitive that somebody I’m working with is maybe bored with it. That’s not a good way to be, but I have my flaws.

I got the email from Kyle on the day after my second Covid vaccination shot. I was feeling miserable and planning to watch some very unchallenging Netflix shows. 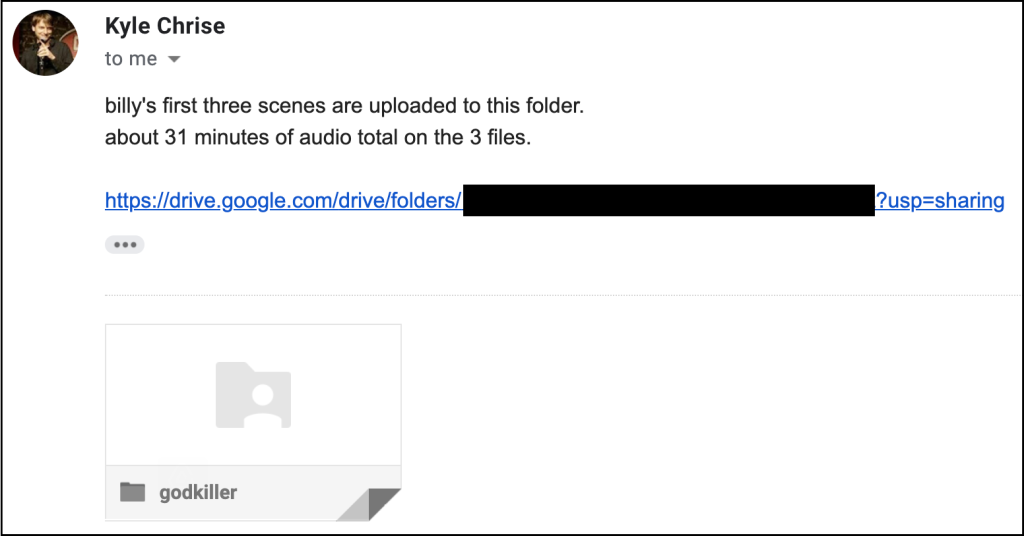 …but getting this email brought my energy back. I clicked the link and downloaded all the files from Google drive. It was editing time!

When I get a raw session from a voice actor, they almost always send multiple reads per line. So say there’s a line like:

The actor might read it three or more different ways. Variations could be:

So the main editing task is to pick the reads I want. This is a bit more than just choosing the line that sounds best. The reads have to match the intent of the script, work well against other characters, and sound right when played together. Also, sometimes an actor will read a number of lines well, but using the same cadence. So in these cases, I need to pick the reads that give more variety as you listen.

Kyle’s reads are really good because he understands the character and scene, and explores different possibilities. He just sent me a raw, unedited dump of his recording session. It was fun for me to edit and pick out the best takes. If you want to see what that was like, check out the video below.