You will explore and solve intricate hand-crafted puzzles by Erik Hermansen, creator of the long-running DROD series. The game moves at your speed, allowing you to prevail using your brain, and not reflexes. Many puzzles involve spelling words, but no knowledge of English is required to solve these or to win the game, overall.

The story is full of surreal situations and dark comedy. The characters are fully voiced with wonderful acting, and even singing. Chapter 1 begins asking the question: what would it mean to fight against a powerful being that created you and the workings of the Universe itself?

It's Time to Cast Voiceovers!

If you’re “all business”, and just want to get to the casting call stuff, skip to the last section of this article.

I finished writing all the dialogue for The Godkiller. And all the level scripting that triggers the dialogue. So the game is what I call “story complete”. I describe this whole process in more detail in the “What Do Game Actors Need? Scripts!” article.

Mild story spoilers in the images below.

The screenplay-format doc that contains all the dialogue is 130 pages long. It looks like this: 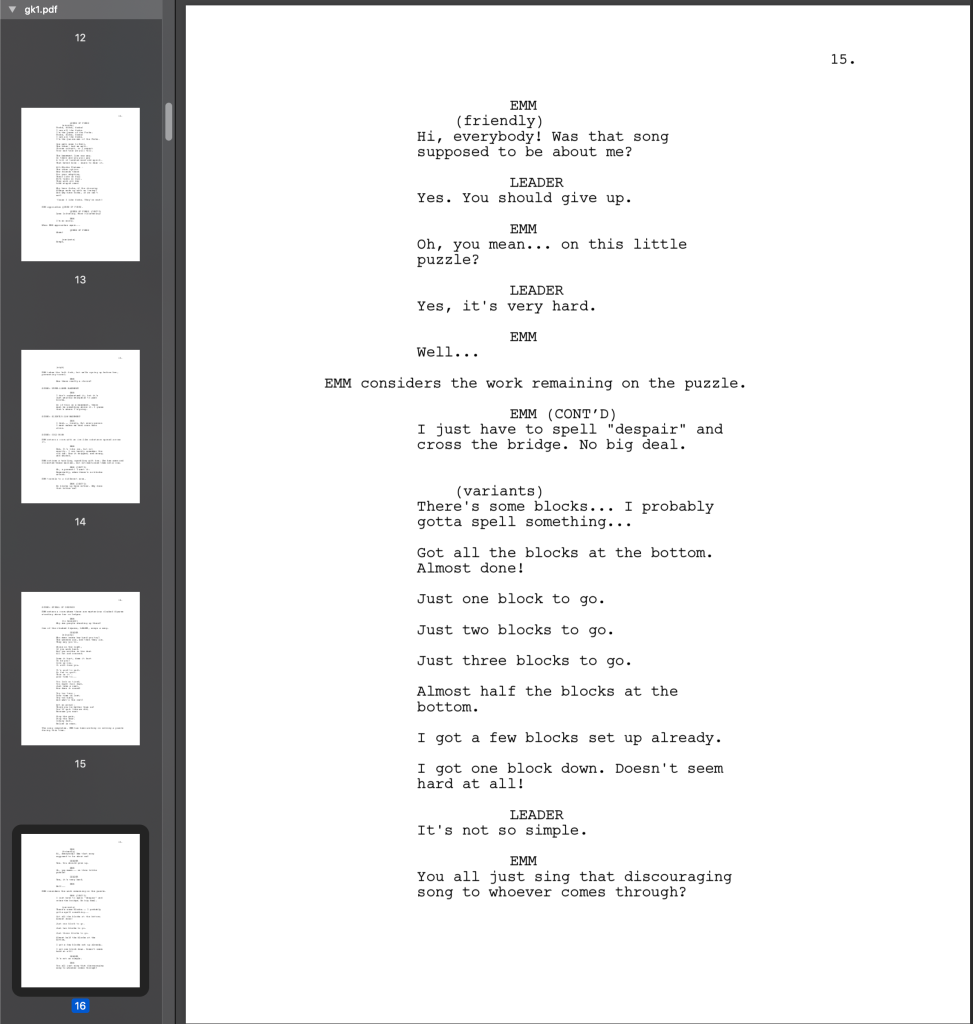 For context, that’s about the length of a typical feature-length movie, e.g. the script for Good Will Hunting is 122 pages. At one minute per page, we’ll have over two hours of recorded dialogue going into the game. A “completionist” player will probably hear about 95% of it. The game is also designed to accommodate players that don’t want any story at all. Just turn off subtitles, set speech volume to 0, and you can progress through the game, oblivious to and unimpeded by all this story stuff.

To keep my schedule, all the dialogue needs to get recorded in June. So it’s time to cast parts! I made a spreadsheet to track all the roles and where I am with each one. 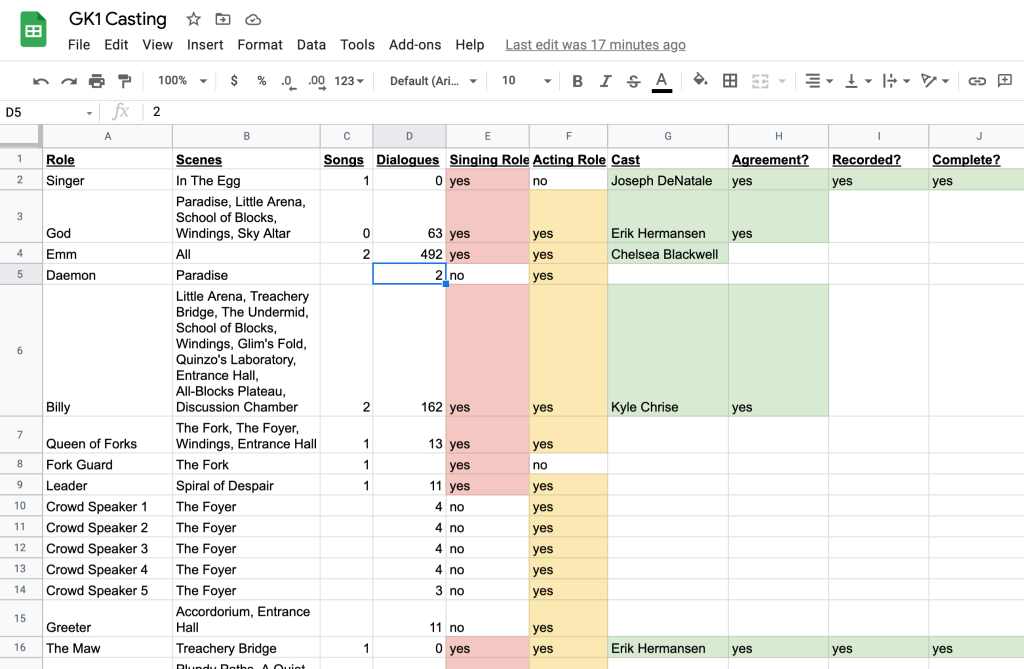 The spreadsheet keeps going. There’s 48 roles to cast. Some of them need actors that can sing. (Or singers that can act!)

I ran a voiceover studio for a year, produced a comedy audio drama, and made some games (DROD series) with voice acting. So I feel pretty confident about getting this done. The only thing that’s a little new to me is casting singers. But now that I’ve got a five songs with recorded vocals in the game, the fear pangs are dying down.

Don’t get me wrong – I know that it’s not the best music. These aren’t songs that impress people. But I think they’ve got “likability”, which is often the best thing an indie can aspire to. When I play Slay The Spire, for example, I’m not impressed by the artwork like I am the art that appears on Magic the Gathering cards. But I like the weird bird cultists and the dog with syringes sticking out of it. It’s weird. It’s neat. I can feel the people behind it expressing themselves. 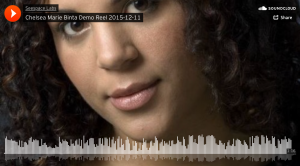 There’s two things that slow me down on using more people from my personal network:

1. For accounting reasons, it’s difficult for me to contract with people in my home state of Washington. It can be done, but due to state requirements, it’s much easier for me to work with people in other states or countries. (That eliminates about 75% of my tried-and-true talent pool!)

2. Not all the great actors I’ve worked with are good singers. For the larger roles, I want to cast people that can sing in key and lift the song somewhere. (OMG, wait until you hear Chelsea Blackwell sing!

I’m pretty sure I can put out a casting call on Backstage.com and get a bunch of responses. I did that before. It worked very well.

And I had reasonable luck finding singers at soundbetter.com. Though honestly, I don’t like contacting six singers to find one that answers and wants to work. I think there’s a lot of dead accounts on there.

I’m going to try casting through Discord this time. I like how the problems of sharing files, chatting, and having live sessions are all solved in one place. We can do table reads on Discord. We can get two actors on a voice channel together to work out a scene.

And there’s a nice community of talent over on the VO Town server. The only problem with VO Town is that it’s full of teenagers and hobbyists. Now, there’s nothing wrong with teenagers and hobbyists – most of us have been both of these things at one point. But I can’t use anybody under the age of 18 for legal reasons. (Too much hassle to get a guardian’s signature on a release form, plus my game is “mature”.) The hobbyists are often talented enough to cast, but lacking a recording environment that will work for the production quality of my game.

There’s a category beyond “hobbyist” that I call “developing talent”. This is someone who doesn’t have a ton of experience, is not yet making a living from VO, but they’re on the path. They janked together some sleeping bag fort thing to kill the reverb, and know the schedule of the train that runs by their house to avoid it. They know what “clipping” and “sibilance” means. Maybe they don’t have ProTools, but Audacity or Reaper is their playground. They can tell you who voices Homer Simpson or The Joker. They’ve got a demo reel, even though they’re super-cringey about it..

I love the “developing talent” crowd. My old VO studio was all about working with these folks.

I’m going to post casting calls for the upcoming parts in both VO Town and on the Seespace Labs Discord server, which you are welcome to join.

I thought my game trailer was really good. But then I asked people about it...

The curse is also the gift. Some things that indies can do better than the big studios.

An Airport for Aliens Currently Run by Dogs Adventure