It is out there! New version of the PARADIGM WORLDS mod. There are two major ideas coming with new version: Total Random and Absolute Freedom. New features make Paradigm Worlds more diverse and alive than ever.

Posted by karolgrodecki on Apr 8th, 2021 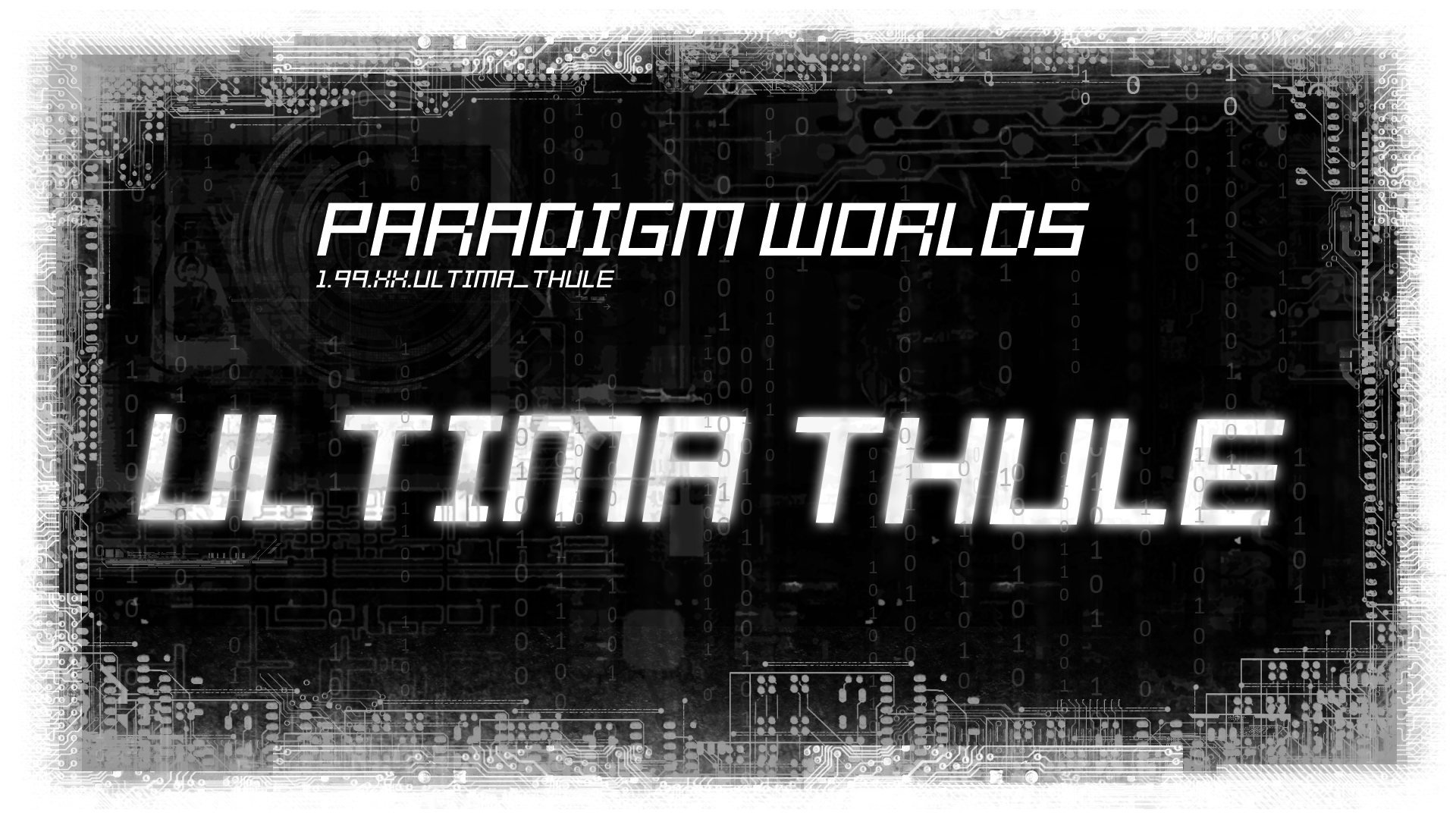 It is out there! New version of the PARADIGM WORLDS total overhaul mod for Mount and Blade: Warband. There are two major ideas coming with new version: Total Random and Absolute Freedom. New features make Paradigm Worlds more diverse and alive than ever (again!). They also make Paradigm Worlds a complete mod.

If you are impatient, and want to learn most important stuff - just watch pictures.

There are few new features, nice and easy to use. Some are 'passive' and other need 'activation'. So let's start with something that comes integrated into mod automatically. There are 3 new factions, or to be precise 3 new faction slots. 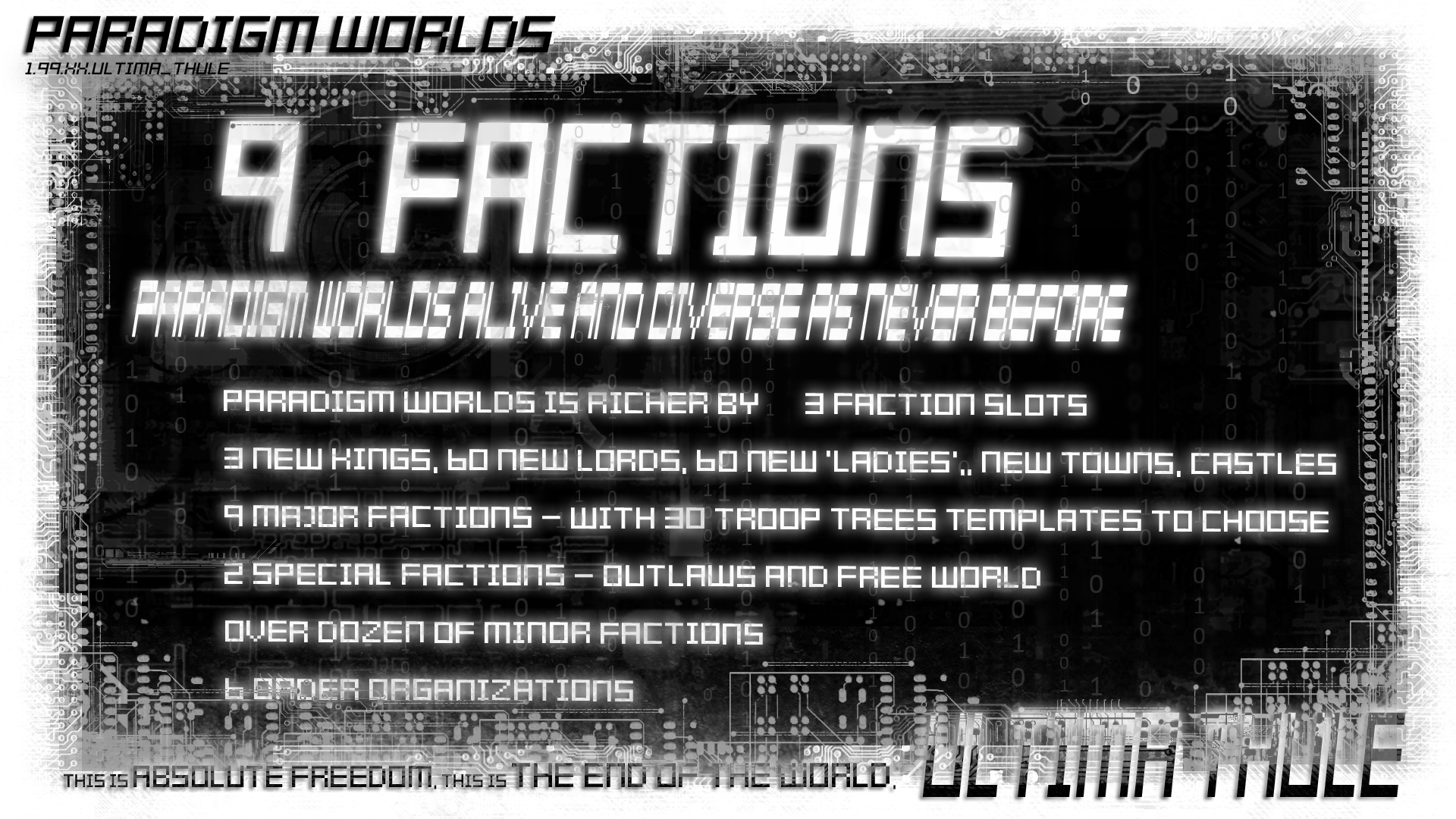 9 Factions in Paradigm Worlds! I've been trying to crack that for YEARS. I tried more than 4 times, each time spending at least month, and failing each time. What I couldn't understand was issue with banners, which were not showing in the right way. On world map, lords instead of banners used various other icons, like village icon. There was no pattern, and problem looked unsolvable. Then I have learned (year later) that there was limited amount of icons that Warband engine could process. That's why I thought that there is no way to add 60 new lords (and 60 new banners! PW already is just about to exceed limit!). And solution was at hand's reach all this time...

This is why lords in Ultima Thule carry kingdom's banner instead of their own. Lords still use their own banners in all notes, in their castles or towns. Thanks to that, there is reduced amount of needed map icons on map, limit is not broken, and everything works properly.

9 Factions. It is absolutely enough. You will see for yourself. Diplomacy may be a challenge now, but it is still quite simple in rules.

There still might be some bugs, do note that it was huge work to do. I am happy to read all comments, and deliver solution in short time. I personally tested various variants for days before release.

9 Factions have been integrated with FACTION EDITOR, so player can create scenario, by having 9 major faction slots, that can be filled by any nation of 30 templates. I remind that each template is another paradigm, that means it comes with theme, whole inventory, special equipment for lords, whole troop tree (group of soldiers that can be promoted), village and town citizens, option to choose from 12 various races for any of them.

With over 12 minor factions operating constantly on world map, and 2 special factions that can hold centers: Free Creatures and Outlaws, with 5 powerful Orders conducting own, independent politics... this all makes I WW Balkan pot a virgin nirvana place where peace is guaranteed by unicorns and angels.

Well, Paradigm Worlds is also about diplomacy, and it is about politics. Famous von Clausewitz's statement that funded modern perception of war, that it is an extension of politics, perfectly fits Paradigm Worlds' philosophy of play.

Now, 9 factions are also integrated with Paradigm's next feature.

Paradigm Worlds challenge is: make it fresh, make it different every time. Surprise me each time I start a new story. 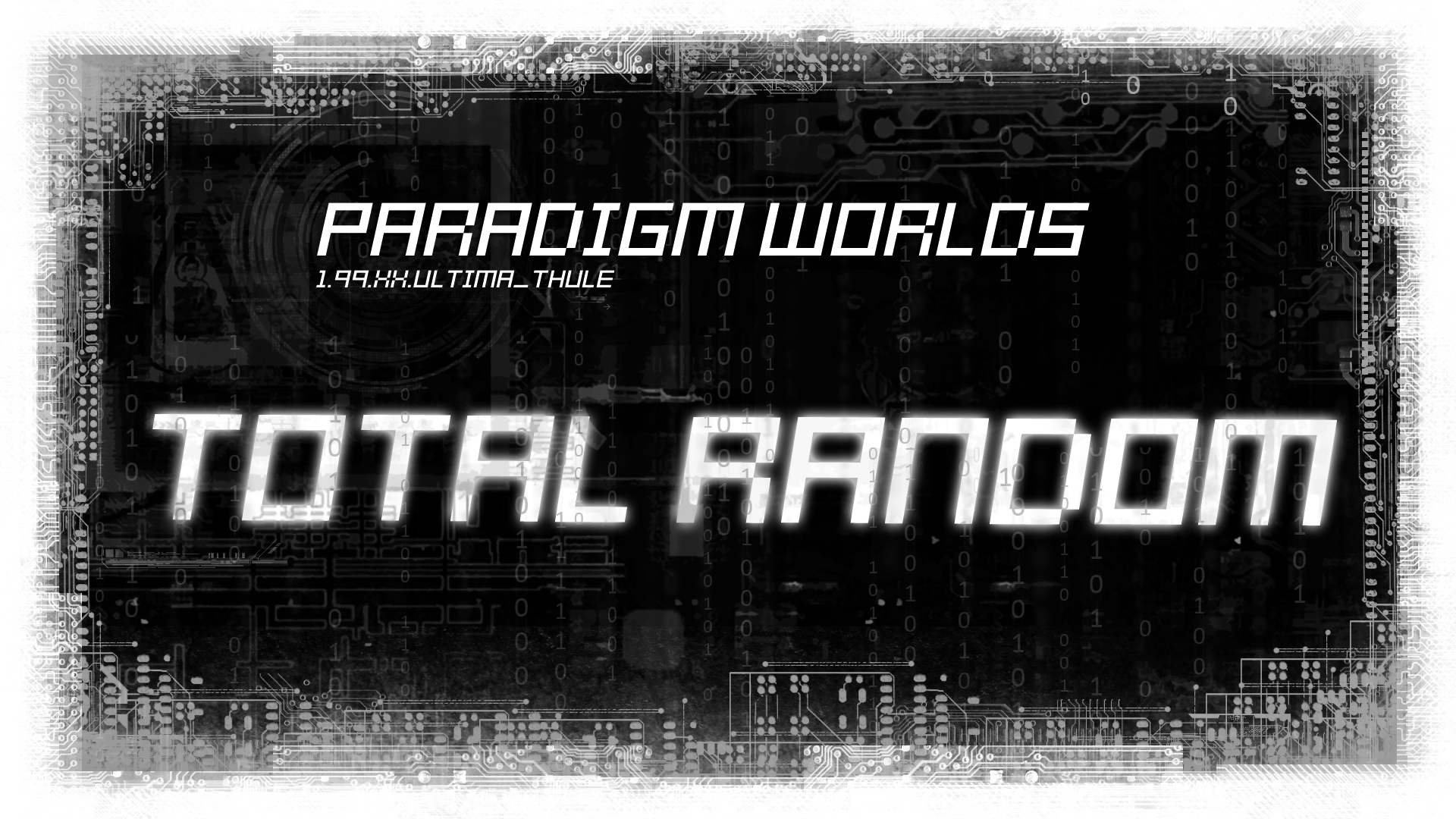 This is why - as you know - Paradigm Worlds have ERA-s. These are scenarios that present various timelines in Paradigm Worlds, like 'classic' scenario last in 6077 AD. But, player can go back in past and see how world looked 1000 years before. Or... travel into a future to 7022, and 8K-ish.

Story-line axis of all scenarios is idea that 'history likes to repeat itself'. In that manner, Paradigm Worlds tells classical story of 'Rise and fall of Roman Empire'. It starts in 5066 AD where there is still Weimear Reich: faction of medieval knighthood represented in the field mostly by heavy cavalry armed with classical weapons complemented by primitive firearms. After a civil war it transforms into a new nation, or to be more precise - Mega-Corporation. Named NecroCorp, giant tech corporation, more powerful than other nations, rises in 6077 AD scenario. In becomes Empire. And like Roman Empire thousands years ago, destroyed by lack of organization due to corruption and decadence, is about to fall - in 10K futuristic scenario.

There is also a special scenario-mode, named simply HELL, which brings world on a verge of fall by setting domination of evil (Outlaws ruling most towns and castles, demons walking on map, etc.).

But... no matter, how rich can be each scenario, new town's names, or new lords, new settings, it is limited. Sure, player can use FACTION EDITOR, and create own scenario.

But... still, this does not solve lack of thrill of unpredictable fate. If player has to plan his scenario... plan is kind of opposite to unpredictable.

So, I present to you: 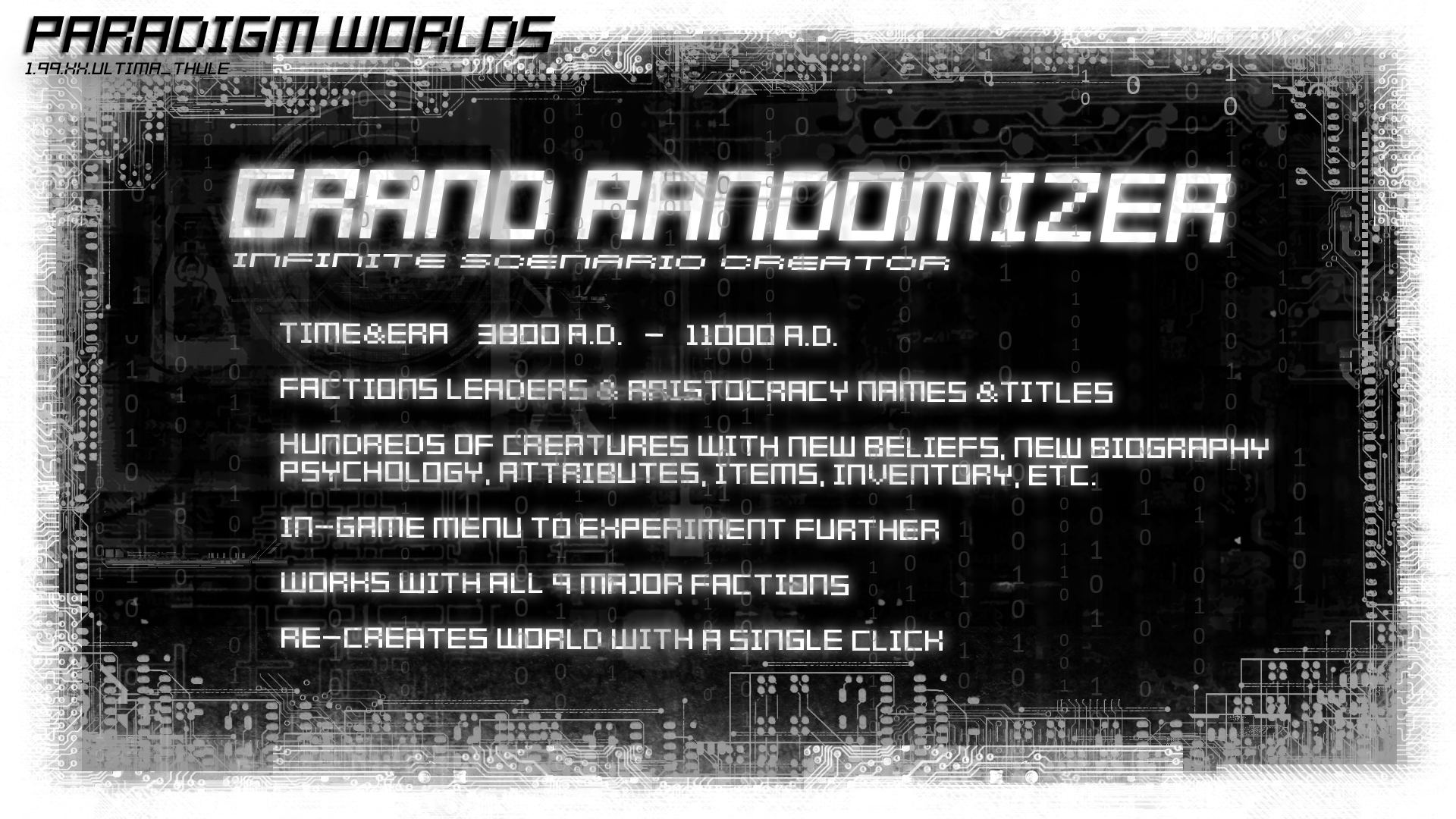 It comes as an option during start new game. When you choose which ERA you want to play, there is a new option #GRAND RANDOMIZER. It is really hard to miss.

All right, almost everything. There are bread crumbs,so you can find yourself in this new reality.

Now, do you remember, when previously mentioned '9 faction slots'? All 9 factions are being randomized. Fully.

New 'King'. Pfff. Faction leader title can be one of the... 74 possible titles! 'King' is boring. What about...? General Secretary? No? Ultimos Prosekutoros, Total-Inquisthor, Drakkor-Ming, Dekapitalis, Marshalissimus, This, who shines forever, Uklan-Magan, Tzakipetl-Man, General Secretary, GenSek? This is just a small sample of what might happen.

Names. Names are not just a random pick from a list. First let me show you names that came from randomizer: (Raja) Qentbej Tutmizmata. Next: (Great Tribune) Xavyyad Kazarynah. Hardly you will see two same.

'Lords' and 'ladies' come with their own set of 'titles'. [accordingly 71 and 64 titles possible to randomize].

As description on picture above says - grand randomizer - creates new scenario each time you start a new game. Relations - personal or diplomatic, lords or their partners, but even shopkeepers, or town folks, villagers, each one of them will have new psychology, new background, reputation, character in general.

Same goes for Orders. Let me remind: currently Orders have their own independent politic, which is based on their 'character'. It can be 'good' like upstanding (for other creatures), or 'evil' like debauched (corrupted). Based on that they send missions to other centers, and when they arrive on place, they conduct operations that can have positive or negative outcome. That was 'predefined' for each Era-scenario. Now is random too.

What's more this comes with a new menu, activated by setting on cheats. It will not tease you during normal play. By turning cheats on, you gain access to dev-menu (with proper function description, so player can use it too), and to the Grand Randomizer menu, where you can experiment more with fate.

Always save before using it.

Bottom line is: each game is new, fresh. It has diverse factions, new fresh play each time.

Now, the second big feature, which was founded by an idea that can described as: 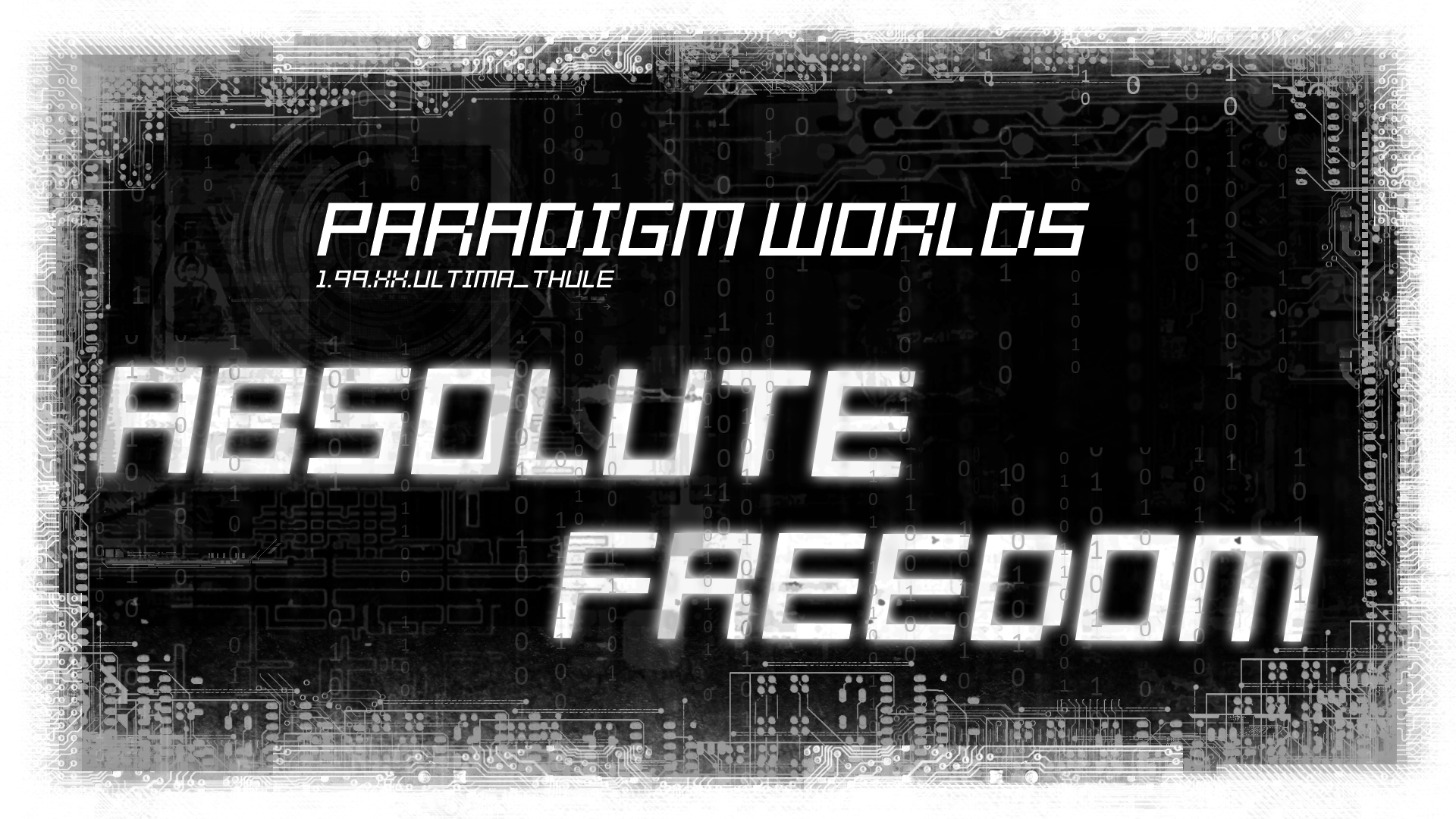 This was main idea for the whole project, as you know. Always. That's why player can wage wars with post-tolkien uruks playing himself alien pirates with lightsabers. And everything possible between. There are items, mainly weapons, from all known historic eras, and there is a huge set of futuristic and experimental tools too.

As a part of this project was integration of 'Personal' troops, a.k.a. 'Custom' Troops. That allowed player to create his own troop tree template based on his imagination... and set of predefined armors, boots, helmets and weapons and so on.

So, there was a choice, but it was limited. Warband allows single troop to hold limited amount of items in the inventory - so obviously this limit was a challenge. For a designer - to choose accurate to level and description items - not too good, not a junk. But choice is personal. It is a challenge to player, to choose wisely.

But... again, it is a limitation. And Paradigm Worlds is about what? Is about breaking all limitations!

So... I present you a new in-game feature: 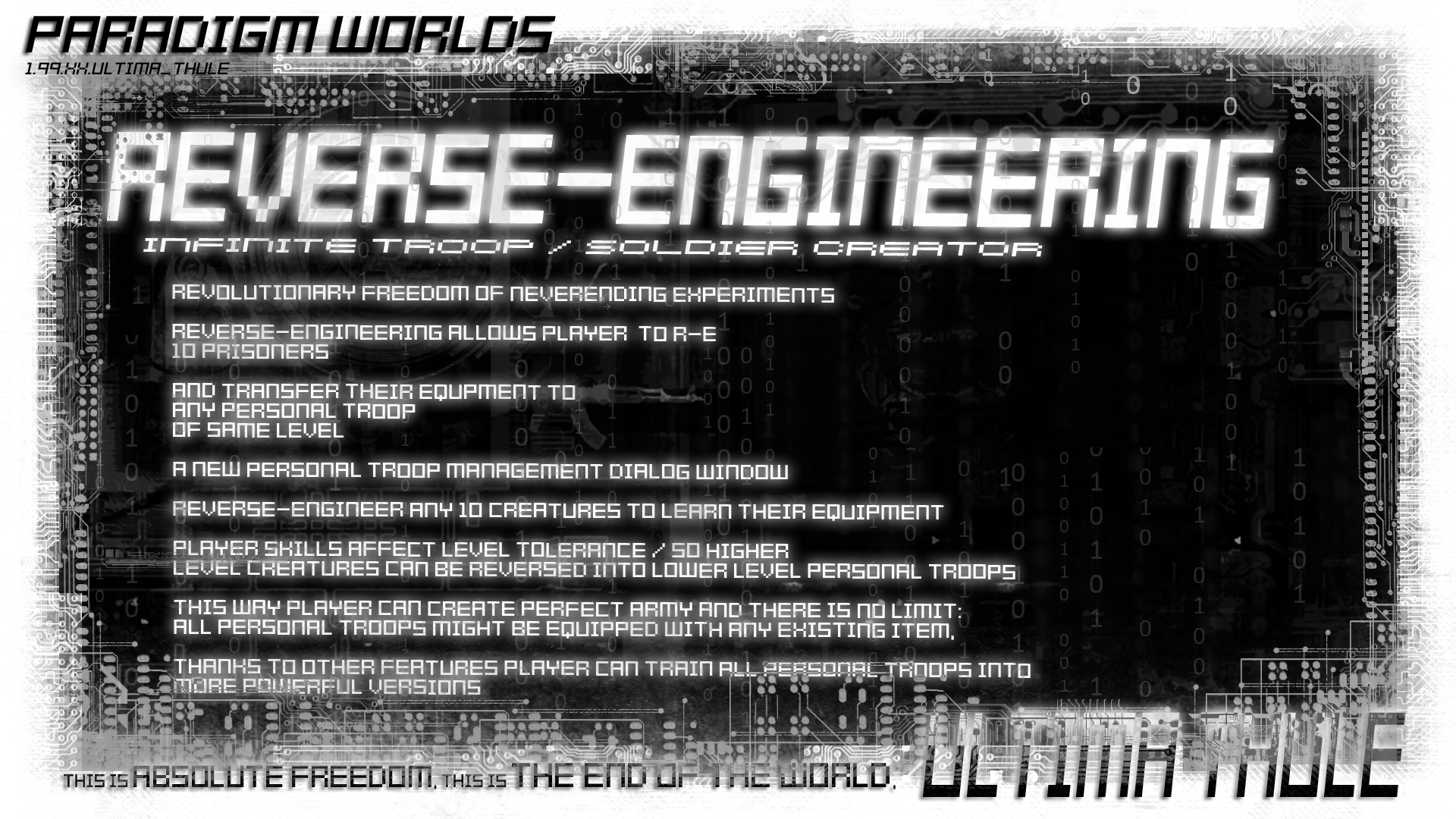 From a designer perspective, I am proud of that feature especially. As you can see, 'challenge' factor is still there - player has to wisely manage his character points, so he can reverse-engineer higher level prisoners and match them to lower level troops of his own.

Another challenge is - naturally - need for prisoners. This means slave trading or... wars. But slaves are precious economic factor, so all threads combine into a larger scheme.

And in a same time player gets what's Paradigm Worlds are famous for: Absolute. Freedom.

Training is possible, but player has to read relevant books first. Using own renown, as experience, that can be shared, player can decide to train any attribute or skill his soldiers have. Player can make hist troops faster, stronger, they can learn how to shoot better, how to handle heavy guns, or how to hit more precise.

Till this update, till Ultima Thule has arrived, this choice was limited. Equipment was predefined, and now it is not. Player has total freedom, a full range and all means or tools needed to create own army from scratch. He can train, manage his troops to mimic any creature in the world, or just make his own.

Player can also shape his fate, his faction, or his nation. You, dear player, can make your own story. Now you have a full, complete set of tools ranging from global politics to personal - creature to creature relations.

What is PARADIGM WORLDS?

PARADIGM WORLDS: We, the Creatures! + patch - a statement of independence of Paradigm Worlds creatures.