In the VO recording world, no combination of gear and room construction ever gets you to Perfect. But let me be clear: this janky setup just barely works for my purposes, which right now is recording voiceovers and song vocals for my video game. 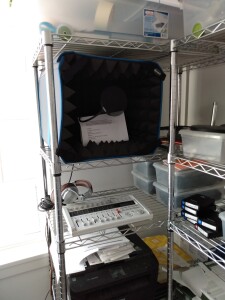 Okay, what are we looking at here?

There’s a Porta-Booth foam-lined box at the top. I stick my head partially inside of it to record. It’s 10% more dignified than recording inside a sleeping bag fort. You might be getting excited about the Porta-Booth being a miracle replacement for a full-sized booth or treated room. But don’t rush out to buy one. For cutting down room reverb, it gets you maybe halfway to the deadness of a proper booth. And for best results, you have to ostrich-bury your head into the box. This is what I see when I record: 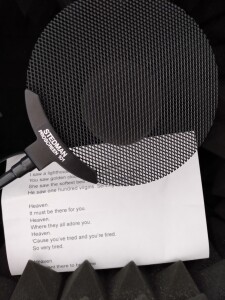 I’ve got the script tucked under the pop shield, and I make furtive glances down at it between lines, working to keep my mouth close to the mic. In the summer, this is a sweaty, fidgety effort. The mic is a Shure SM58, the AK47 of microphones – cheap, robust, reliable, and unremarkable. It’s very “good enough”. The mic plugs in via XLR cable into a Zoom R16, which records to an SD card. 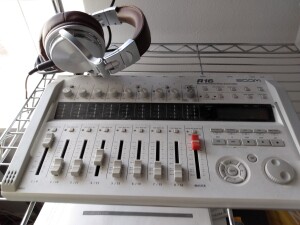 In the past, I recorded directly to a laptop. But I found that a dedicated recorder like the one above gave me some advantages:

This model, the Zoom R16, particularly appeals to me because it doesn’t try to be too fancy. For example, it’s missing the EQ knobs of a typical console. Why would I want those? The audio is going over to the computer – I’ve got EQ and five million filters that can be applied in software.

Generally speaking, a modern computer is a chaotic mess of little demons you have no control over. Your machine will get upgraded and manipulated in various ways at the whims of product managers at Apple, Microsoft, and Google. My DAW software will crash inexplicably. It probably has something to do with Software X never being tested with Software Y. We’re all running a complicated set of pending catastrophes on our machines, and it keeps getting worse. Jonathan Blow’s talk on this was great, if you want to go down that hole.

Having a simple, dedicated piece of recording hardware keeps me sane. The only bad thing about using the Zoom is I have to ferry files over to my computer to work on them. 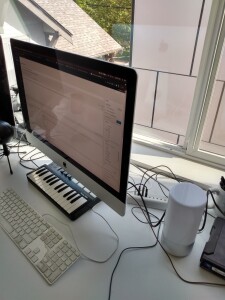 When I get ready to record, I listen for airplanes (I live by an airport) and the neighbor’s dog barking (he particularly hates my singing). And in the summer, there’s the extra step of turning off the fan and closing the door to my office. It’s terrifying how fast the room heats up after I shut the door. 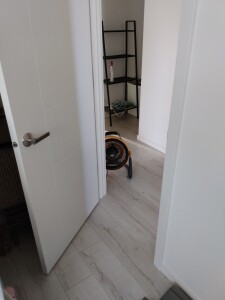 The video below is an example of results achieved with this janky setup.

And by the way, I am not affiliate-linking any of this gear. The only thing I’m sorta pitching is my video game, The Godkiller, which will have about 90 minutes of recorded story dialogue in it, and a dozen songs with vocals.

On the shelf next to this minor jumble of audio tech, are plans to build a Dawbox, which would be a proper recording booth. The kind you can put your whole body inside of instead of just your head. Oh, what a luxury that would be!

Awesome job on your game, and I admire your dedication to your noise floor!
Well done little article!